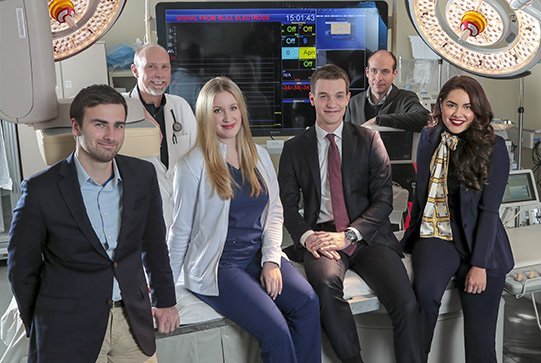 Something clicked for Dr. Dwight Chrisman, a cardiologist for Arkansas Cardiology in Little Rock.

Chrisman, who attended the University of Arkansas at Little Rock for his undergraduate degree in biology in 1993, had the idea for a surgical device he named the “Speed-TorqueTM”, designed to be used in minimally invasive heart surgery.

The Speed-TorqueTM, is a next generation torque device – the tool a surgeon uses to maneuver a surgical guidewire and catheter through the femoral artery of the patient’s body to gain access to the heart.

This process in its current form requires the surgeon to use both hands to perform this procedure, and in surgeries that can last up to five hours, this can increase both surgical time and the potential for patient harm. Chrisman’s idea was a device that would click into place, and then the surgeon would need just one hand to operate it.

Chrisman developed his idea into a design that he knew would make the procedure faster, and safer for both surgeons and patients, but knew he needed help and business experience to turn his design into a commercialized product.

And that’s when UA Little Rock got involved.

Chrisman took his idea to the university’s Arkansas Small Business and Technology Development Center and met Martial Trigeaud, business consultant and an adjunct faculty member. Martial immediately saw the value of the Speed-Torque’s simplicity and market potential and set out to build a team to help Chrisman get his technology to the market.

The team is led by Noah Asher, a senior finance and economics major at UA Little Rock, who has previous experience and success working on startups and commercializing medical technology and who has previously worked with Trigeaud on past ventures.

To round out the team, Trigeaud brought in two other seniors from UA-Little Rock’s College of Business: Abigail Resendiz and Zachary Cochran. Both have experience in small business development with the Arkansas District Export Council and Startup Operations with Rose Technology Inc. respectively.  Trigeaud became the team’s advisor, and Vascugenix was born.

After a year developing the technology and building business strategy, the team has spent the last few months on the road, traveling around North America to raise money and test out their business model by competing against other students. They have had resounding success.

First, they went to the International Competition at Western University, in Ontario, Canada where they took home a second place overall and a $3,000 prize.

In the first weekend of April, the team traveled to Rice University in Houston to compete in the prestigious Rice Business Plan Competition, the largest new venture competition in the world. “Out of 42 teams comprised of some of the top universities and smartest graduate students in the world, we finished in the top ten,” Asher says. “We are really happy with how we did, and I am extremely proud of our team.”

Just getting invited to Rice was an accomplishment; they were chosen from over 400 applicants.

Trigeaud notes, “Vascugenix was the only team to compete in Rice from the state of Arkansas. Of the other 41 teams competing, the vast majority were MBA or doctoral students from prestigious Universities such as Harvard Business School, the University of Cambridge, and MIT. I am extremely pleased with how our students performed given their competition.

The names of the universities selected are impressive, and they are some of the best universities in the world sending their best students. This is the second time a team from UA Little Rock has qualified for this event and first time made it past the semifinal.”

Back in Little Rock, the team also experienced success in the Arkansas Governor’s Cup, where they placed first in both the Winrock Automotive Undergraduate Division and the Innovate Arkansas Innovation Division, taking home $30,000 in prizes.

Finally, the team flew just after the Governor’s Cup award luncheon to Minneapolis, Minnesota in order to participate at the E-Fest Business plan competition organized by the University of St Paul. The team performed well, earning first place in the Innovation category and third place overall, bringing home $40,000.

In total, the team has brought in over $75,000 in cash prizes from four competitions, and placed in every competition they competed in, making the team the most successful in UA-Little Rock’s history. “What I was most impressed with from the team is the consistency in placing in the top of every competition they competed in,” says Trigeaud. “Both the University and the Dean of the College of Business, J.P Wayland, are ecstatic over our results and success.”

“One thing that really separates us in all of our competitions is that our company and product are ready for market,” Asher says. “We have something that has a proof of concept and is ready to be manufactured. We also are extremely focused on staying within existing surgical techniques to make our product as easy for surgeons to use as possible.  We aren’t a market disruptor, we are simply providing incremental improvement and innovation. This helped us stand out from many of the other companies at other competitions, who had earlier stage technologies that had more disruptive aspects and required longer returns for investors.”

As for Vascugenix, Asher says after gaining investment capital, the next step is finding a manufacturer.

“We are talking to a couple of places,” he says. “It is just a matter of getting their price at where we want” and Chrisman’s innovation will be ready to for cardiologists to use across the country.

And neither can innovation.

The company is now seeking $1.4 million in investment capital to launch a product that Asher estimates could sell “75,000” units in its initial launch later this year.

READ MORE: Find Out More About the Arkansas Governor’s Cup