Trucking Along In Arkansas

Trucking is one of the largest industries in America, and Arkansas is an industry hotbed. Haulers and the companies they work for are responsible for keeping the supply chain moving, getting products, packages, chemicals, food and so much more where it all needs to go in an efficient manner.

According to Shannon Newton, president of the Arkansas Trucking Association, one in 12 private sector Arkansans work in trucking, amounting to approximately 87,000 jobs. Per capita, trucking employment is the number one state industry, according to Newton.

“The impact of the transportation industry in Arkansas is substantial,” Newton says. “It cannot be overstated.”

Each of the Fortune 500 companies in Arkansas – Walmart, Tyson Foods, Dillard’s, Murphy USA and more – are increasingly impacted by trucking and transportation logistics.

Arkansas trucking has benefited greatly from the economic bounce back following the Great Recession. And it weathered the downturn better than others, according to the trucking association president.

“The state of the industry is very strong,” she says, adding that a lot of trucking companies in the state are reporting profitability. “When industries like manufacturing and construction are doing well, that’s a sign trucking is also doing well.”

When people think about new advancements in trucking technology, their minds might go to electric and even driverless trucks. And while Reuters reported both Walmart and J.B. Hunt Transport Services have shown interest in Tesla’s new “Semi” electric trucks, Newton says it’s unlikely these technologies will be hitting Arkansas highways in high numbers in the immediate future.

“These trucks may be silent, but they speak loudly of our dedication to creating a more sustainable transportation system,” J.B. Hunt CEO John Roberts said. “Our efforts to reduce our carbon footprint and improve efficiency stretch across the supply chain, from intermodal load conversion to enhancing the aerodynamics and safety of our fleet. This latest addition brings that effort to the last mile and directly to the consumer’s doorstep.”

However, each of these technologies faces unique challenges. Electric trucks will need all new infrastructure set up across the country for charging, compared to fuel stations already open across the United States.

According to J.B. Hunt, the five trucks purchased last year were to be used making “final mile” deliveries in Santa Fe Springs, Calif., and Houston.

Rochelle Bartholomew, president and CEO of CalArk, a family-owned trucking company in Arkansas, says she expects new technologies like, driverless trucks, to impact CalArk someday, but they aren’t the company’s main focus just yet.

“CalArk has developed proprietary software systems that have made it easier to track loads, manage weather and traffic conditions effectively, and communicate with drivers,” she says. “So, right now, it’s less about driverless trucks that can’t yet navigate complicated decisions at stoplights or deftly easing a 53-foot trailer into a supermarket loading bay without scratching a bumper and more about our customers being able to depend on us to accurately predict that their furniture order will arrive before the weekend, even if there’s a thunderstorm in Atlanta rush-hour traffic.”

New technologies in trucking safety, however, are getting more traction at every level, Newton says. This includes video cameras, recorders and mirrorless trucks. And these safety advances have a clear return on investment. According to Newon, travel recordings can help companies and drivers catch errors, correct them and save money later by avoiding potential accidents.

“At the end of the day, no amount of financial success is worth endangering the people who have dedicated their lives to working with us. We have a company-wide, top-down understanding of and appreciation for the importance of safety and the impact it has on our company, on our industry, and on the motoring public,” Bartholomew says.

“Everything about our training programs and weekly safety meetings demonstrate that safety isn’t just a thing we do to keep operating but a philosophy we care about because no amount of profit is more important to us than ensuring our drivers and our families who share the road with them get home to their spouses, kids and grandchildren,” Bartholomew says.

Driver shortages are also a key issue for the trucking industry, according to Newton, and she says it’s a complex one that has been around for a long time. To combat this, companies are looking at desirable work/life balances and getting drivers home more.

Arkansas is a place that values family and being with children and spouses can be worth more than even the highest salary, Bartholomew says.

Age is another challenge as the industry struggles to attract young people.

“Younger men and women choosing their profession want to be home daily, run more local trips or be on a predictable dedicated run where they know exactly when they will be home and not running cross country like in the years past,” Bartholomew says.

“Our main challenge now is profitably meeting the increased post-Amazon.com America demand for shipping while recruiting experienced drivers and providing the work-life balance we want to give them,” she adds. “Creating more opportunities for the most diverse range of hires has made it better not only for the driver but also our company. We’re especially proud of our work with the Women in Trucking organization and our lower-than-industry-average employee turnover.”

“One of the biggest challenges that trucking companies face today is attracting new drivers to the industry,” Culp says. “We have been successfully training drivers for many years and are excited to announce the addition of CDL education to our curriculum. Maverick Driving Academy will offer a seamless path to employment at Maverick, for those seeking a new career as a professional truck driver.”

Maverick Transportation opened its first training facility in North Little Rock in 2005. The new driving school operated as an expansion to the company’s existing programs where students can get the necessary CDL education and training to become professional drivers.

“Our new school is a way to add to the driver education that has already been a vital part of our growth and success over the years,” Culp says. “We are committed to growing our company ‘The Maverick Way’ and we’re looking forward to having these new drivers walk through our doors.”

In another snag to the industry’s efforts to recruit younger drivers, federal law requires that commercial drivers be 21 to drive a large truck across state lines. By age 21, a young person might well be on track toward a specific career.

If the law were changed to allow commercial drivers 18 and older to drive large trucks across state lines, trucking firms could reverse a current demographic challenge and recruit workers at a younger age, Newton says.

To that end, Newton says the Arkansas Truck Association and others are aggressively pursuing changes to that federal law.

This month, the Arkansas Trucking Association will host its 2019 Business Conference & Vendor Showcase. The event will take place from May 15-17 at the Statehouse Convention Center in Little Rock.

It will provide value, an education forum and an opportunity for peers and members who only get to see each other once a year to come together and share solutions to industry problems. It gives trucking industry workers the ability to network and share experiences.

The event will also give trucking executives a chance to hear the latest economic trends from Bob Costello, chief economist for the American Trucking Associations. According to Newton, attendees will want to hear his forecast and insight into the macro-economy.

“We feel it first when things start to slow down or pick up,” Newton says, speaking on the trucking industry as a whole.

As 2020 and 2021 grow closer, CalArk’s future projects include regional fleets, focusing on intra-Texas and increasing business in select markets throughout the southeast United States, according to the company’s CEO.

“We’re also doing some exciting software upgrades to improve efficiency with our warehouse services,” Bartholomew says. “While we develop that business, we’re meeting recruiting needs by continuing to add more regional and dedicated lanes that get drivers home more often, as well as several other incentives drivers want.”

A persistent problem the trucking industry deals with is cargo security. In 2017, Cargonet, a national theft prevention network, reported $145 million worth of freight was stolen in the United States and Canada.

Companies like ABF Freight employ different security measures to cut down on stolen goods. The company said its trucks secure service centers protect freight 24/7. Another layer of security employs technology solutions, in that, all ABF trailers are GPS trackable via electronic logging devices.

ABF can track shipments in real time, and its customers also have access to online tracking at all times.

As technology advances, the world of trucking will progress with it. Trucking companies in Arkansas and around the country will continue to be called on to transport goods, products, materials and more. And these companies and their drivers will keep our state trucking forward.

Spend any time on an Arkansas highway and it’s easy to see that the trucking industry has a major economic impact on the state. With Interstates 30, 40 running east-west and 55 north-south, Arkansas is connected to the 48 contiguous states of the country via the National Highway System’s 47,856 miles of roadways. According to the Arkansas Trucking Association, the industry provides 83,000 jobs and $3.5 billion in wages annually in the state. 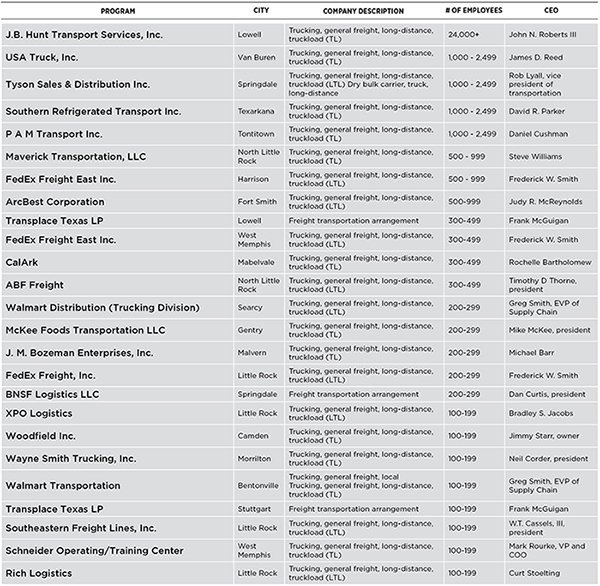 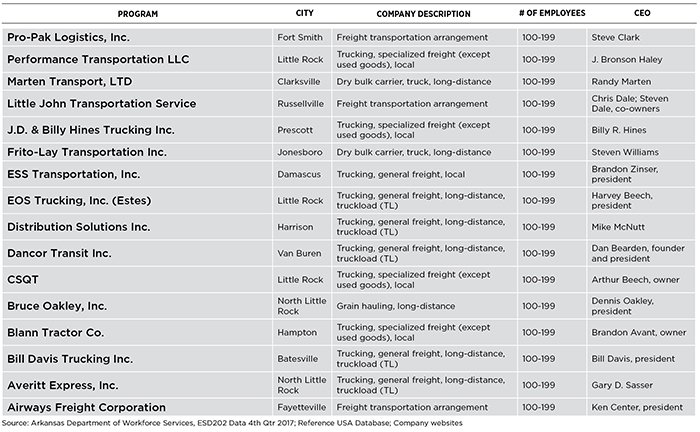