Rich Howe, chief executive officer of Inuvo, is challenging the leaders of Arkansas, Little Rock, and North Little Rock to think big as they plan the I-30 expansion. Based on Mr. Howe’s vision, Katie  Cox, creative services team leader at Inuvo, created this rendering of a cable-stayed bridge to replace the I-30 bridge. 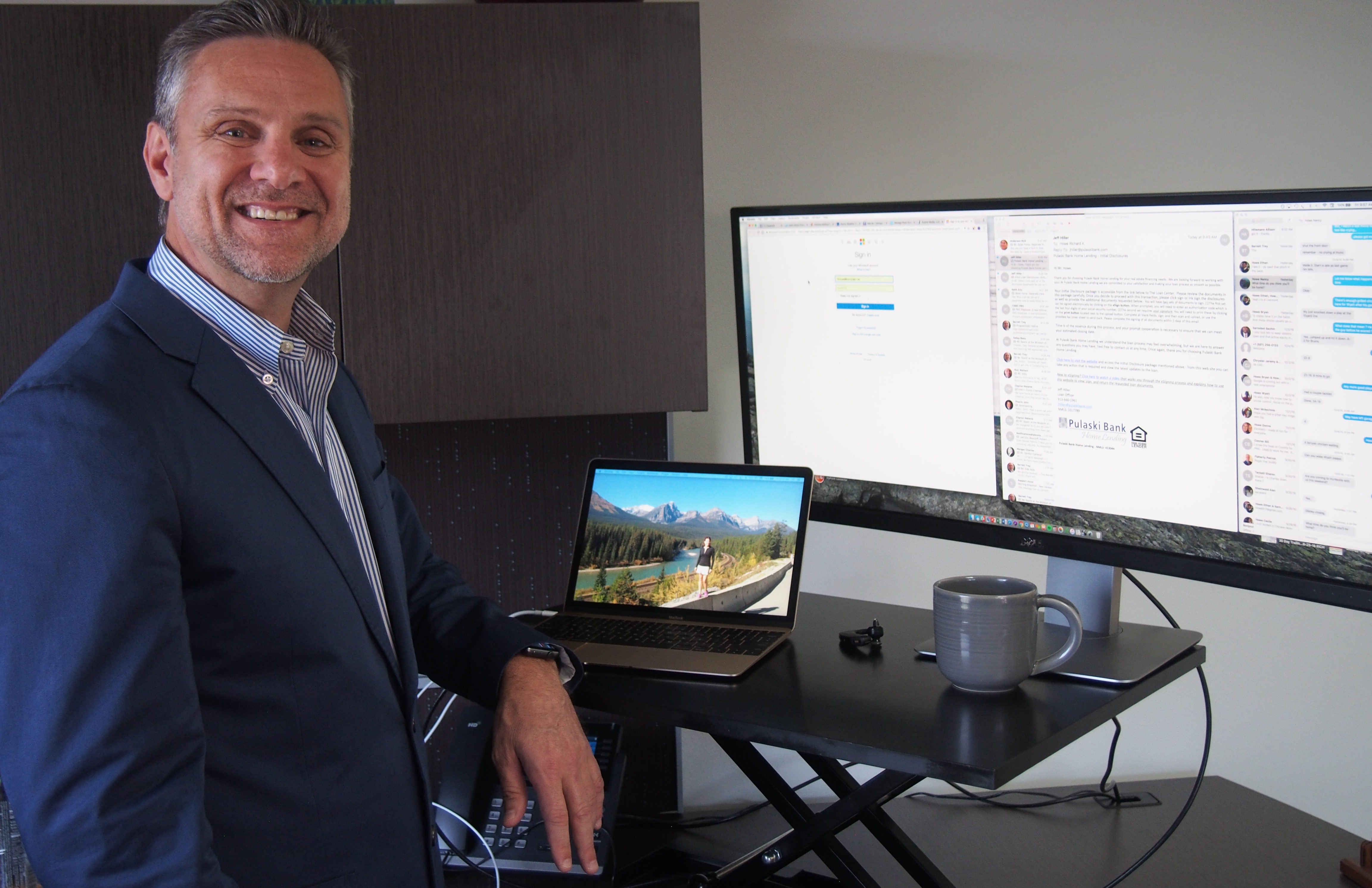 Rich Howe, CEO of Inuvo, at his offices in Little Rock (AMP photo by Joe Kramer)

I’ve been watching curiously the debate over the I-30 Highway improvement project. Proponents believe the expansion will ease congestion, handle growth and invite economic development, while opponents believe expanding an infrastructure that passes very close to the city does not optimize limited city land for its residents. Both arguments are valid.

I’ve spent the last thirty years in the technology sector, where I have built, operated, acquired, sold, improved, and innovated businesses both big and small, private and public. I’m currently the CEO of Arkansas-based INUVO Inc., a public advertising, technology, and digital publishing company.

What many don’t know about my background is that I started my career as a bridge engineer. After I earned my college degrees, I was fortunate to have been recruited by one of the world’s leading and most innovative bridge-design firms, at the time called Buckland & Taylor Limited (B&T), but subsequently acquired and renamed COWI Bridge North America.

Imagine my excitement, the thrill of a young engineer with a background in structural engineering and computer science, when I was remarkably thrust into the design and construction of some of the world’s most innovative and architecturally stunning bridges. My experience at B&T was inspiring and shaped forever in my mind the importance of aesthetics as a complement to design.

The Great River Bridge that crosses the Mississippi River at Burlington, Iowa, was one of Rich Howe’s first projects as an engineer. (Photo by Nathan Moore; bridgehunters.com)

The very first project I worked on as a young engineer was the Great River Bridge across the Mississippi River in Burlington, Iowa. My introduction to bridge design was, incidentally, in the new category of cable-stayed bridges. These bridges were growing in popularity because of their majestic look as well as their efficient use of materials – the least amount of concrete and steel to support the loads. This efficiency made the structures less expensive for the clients, typically government, particularly for longer spans.

Equally influential to me was how the city and state in Burlington, Iowa, was approaching this project. This was not just a simple infrastructure enhancement; this was a way to transform a rundown riverfront into a vibrant area. City leaders and developers in Burlington soon converted this space into parks that were complemented by commercial and residential spaces, and it was all enhanced by this magnificent bridge that leaders hoped observers would forever associate with Burlington. In a sense, the bridge’s conception and construction built a brand for Burlington.

This was not the first time I had experienced this way of thinking. Prior to the Burlington project, and while a rookie engineer, I had been asked to analyze the supporting structure for perhaps one of the most iconic bridges in the world: San Francisco’s Golden Gate Bridge. Whereas in the Burlington case, I witnessed a vision for transformation that incorporated a beautiful structure, in San Francisco, I witnessed probably the ultimate success of such an approach in which the world has positively and eternally associated the city with the bridge.

Some Thoughts on the I-30 Project

As part of its effort to solicit support for the project and to educate the public, the Arkansas State Highway and Transportation Department has been meeting with various groups over the past few months, and I was fortunate enough to be included in one meeting when the commission visited the INUVO offices in Little Rock.

We reviewed the current plans and discussed some of the opposing views. In addition, we discussed how various current infrastructure would be improved with a new bridge, as well as how complicated it would be to move the bridge (and supporting infrastructure) to another location, an option that some groups have suggested. The INUVO offices overlook the I-30 bridge, so we have a vested interest in the outcome of this project. 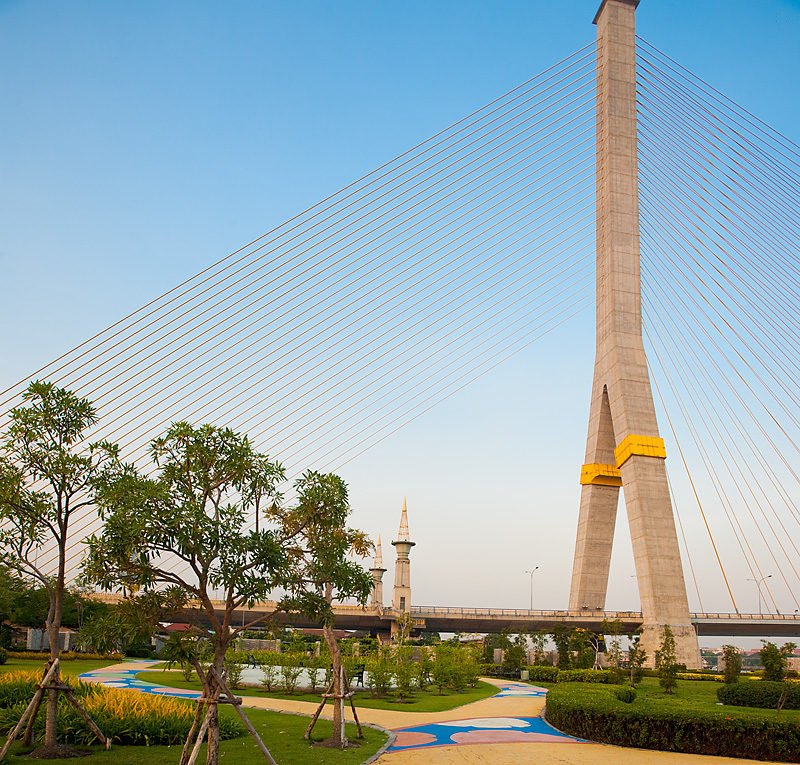 Leaders in Little Rock and Arkansas could look to the Rama II cable-stayed bridge in Bangkok, Thailand, as they plan the expansion of I-30, is the challenge from Rich Howe. (www.dailytravelphotos.com)

As an engineer, I came away from those meetings thinking that moving the entire project seemed impractical, but that to do nothing would not produce a desirable outcome for anyone. I considered the cost, which I believe has been budgeted at $630 million, while also reflecting on the positives: that much of this funding had been collected in a prior-use tax for this purpose, and that the project would likely create jobs and drive business to local contractors. With those realizations, I quickly began to consider ways to proceed with the bridge that would ultimately allow us to unite everyone.

Thinking Outside the Box

To be quite honest, Arkansas has a brand problem. The city of Little Rock is a footnote, at best, to other cities around the country. Those of us who know and love Arkansas and Little Rock realize that while unfounded, others’ perception of our state and city remains a challenge in our ability to attract, retain, and develop industry – and the people behind those industries.

My idea is simple: rather than fighting with each other about an infrastructure project that is likely to proceed regardless of that fight, we must unite around a common goal. Rather than refurbishing the existing bridge as is currently being contemplated, why don’t we create a city centerpiece by replacing the I-30 bridge with a magnificent structure like the Rama VII Bridge in Bangkok or the Margaret Hunt Hill Bridge outside Dallas.

We want our city to be distinctive, to have a vibe aligned with its location and its inhabitants, and to be attractive to visitors. What I see in Little Rock is an urban environment with a strong connection both to the waterfront and our history as the Natural State. I see a younger generation moving in, young people who are excited about projects like the tech park, the walking trails of the riverfront area, and the dining and entertainment options.  They are thinking about the future, not the past, and we should embrace this modern view by building a cable-stayed bridge that would accentuate the existing nautical vibe of the riverfront while putting the world on notice that our city is the city of the future. 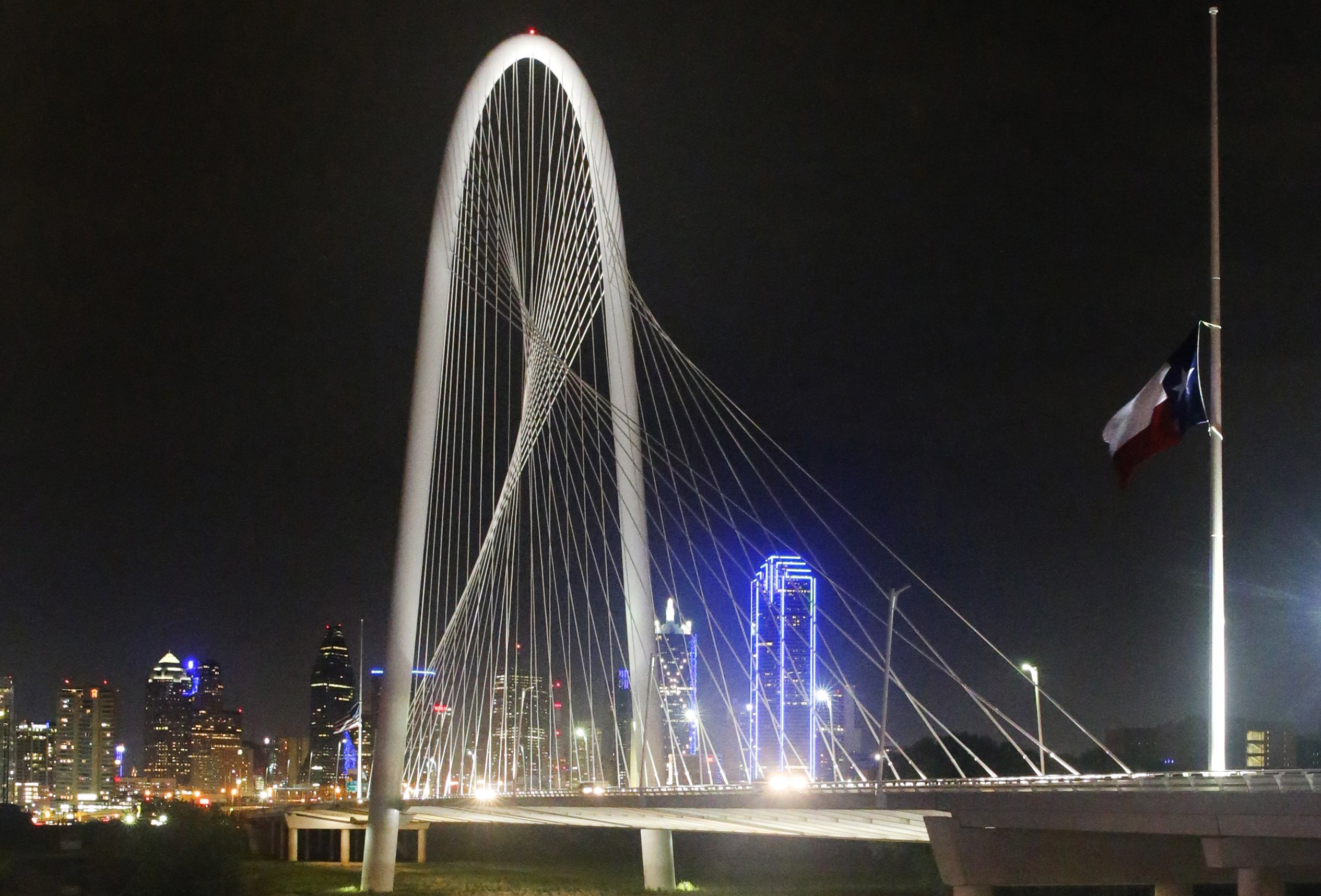 The Margaret Hunt Hill Bridge in Dallas is one of the iconic cable-stay bridges that Rich Howe suggests as inspiration for Little Rock’s I-30 project. (AP file photo by Tony Gutierrez taken July 9, 2016)

Cycling Cities Ranked in the Natural State by...

The Construction Project that Never Ends: An Update...

Be Pro Be Proud National Conference Meets in...

Arlington Resort Hotel Getting a Facelift in the...

Great creative thinking, Rich!
Add some well designed LED lighting, and we continue what has been started ….. unique urban bridge art. A distinction for our city,
both day and night.

I couldn’t agree more! Great insight and thanks for sharing with the community!