Bentonville’s Louise Thaden (above, right in cockpit) and Frances Marsalis moments after they landed their plane at Roosevelt Field in New York on August 22, 1932, after breaking the women’s endurance record of 196 hours and 6 minutes. Louise’s name was painted on the side of the plane.(AP file photo)

BENTONVILLE (December 5, 2016) ~ A private school that will open in August is preserving the past even as it prepares students for their future.

Its founders have named it The Thaden School in honor of the Bentonville native who is one of America’s foremost aviator pioneers. 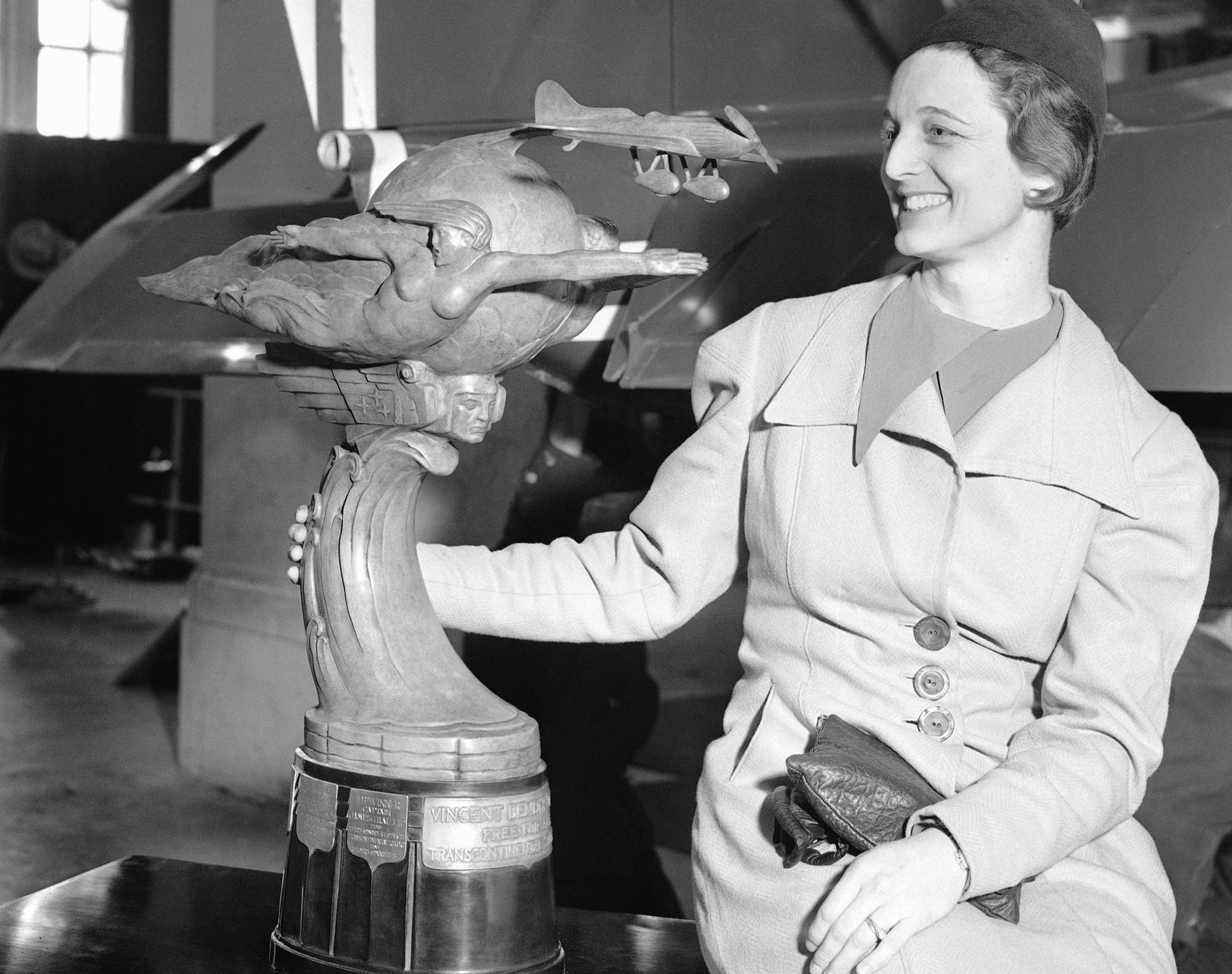 In 1936, Louise Thaden showed off her Vincent Bendix trophy, which she won in a transcontinental competition. She was the first woman to win the trophy. (AP file photo by Tom Sande)

In the late 1920s, Louise Thaden became the first and only pilot to simultaneously hold the women’s records for altitude, solo endurance, and speed, according to the Arkansas Encyclopedia of History and Culture. She won the first all-women’s transcontinental race against her friend Amelia Earhart and other star pilots of the era.

Mrs. Thaden represents the strong and clear tie to the community that Clayton Marsh had been seeking since he assumed his position as the school’s founding head in January 2016. The project presents “a great opportunity to create a school that would have a history [through] somebody who was a pioneering figure and breaking barriers in all kinds of interesting ways,” Mr. Marsh says.

Mr. Marsh and his team — upper school head Lisa Herschbach and middle school head Jose Leonor — discovered that one of her childhood homes is still standing at 703 W. Central Avenue, only blocks west of the square. Louise McPhetridge, her maiden name, attended high school on the same land where the Thaden School will be built.

The grassy lots just southeast of 8th and Main streets are now vacant, but once were home to Bentonville High School and the Benton County Fairgrounds. The two biggest plots of land that Walmart donated to the school, totaling about 25 acres, are valued at more than $3.6 million, according to public records. 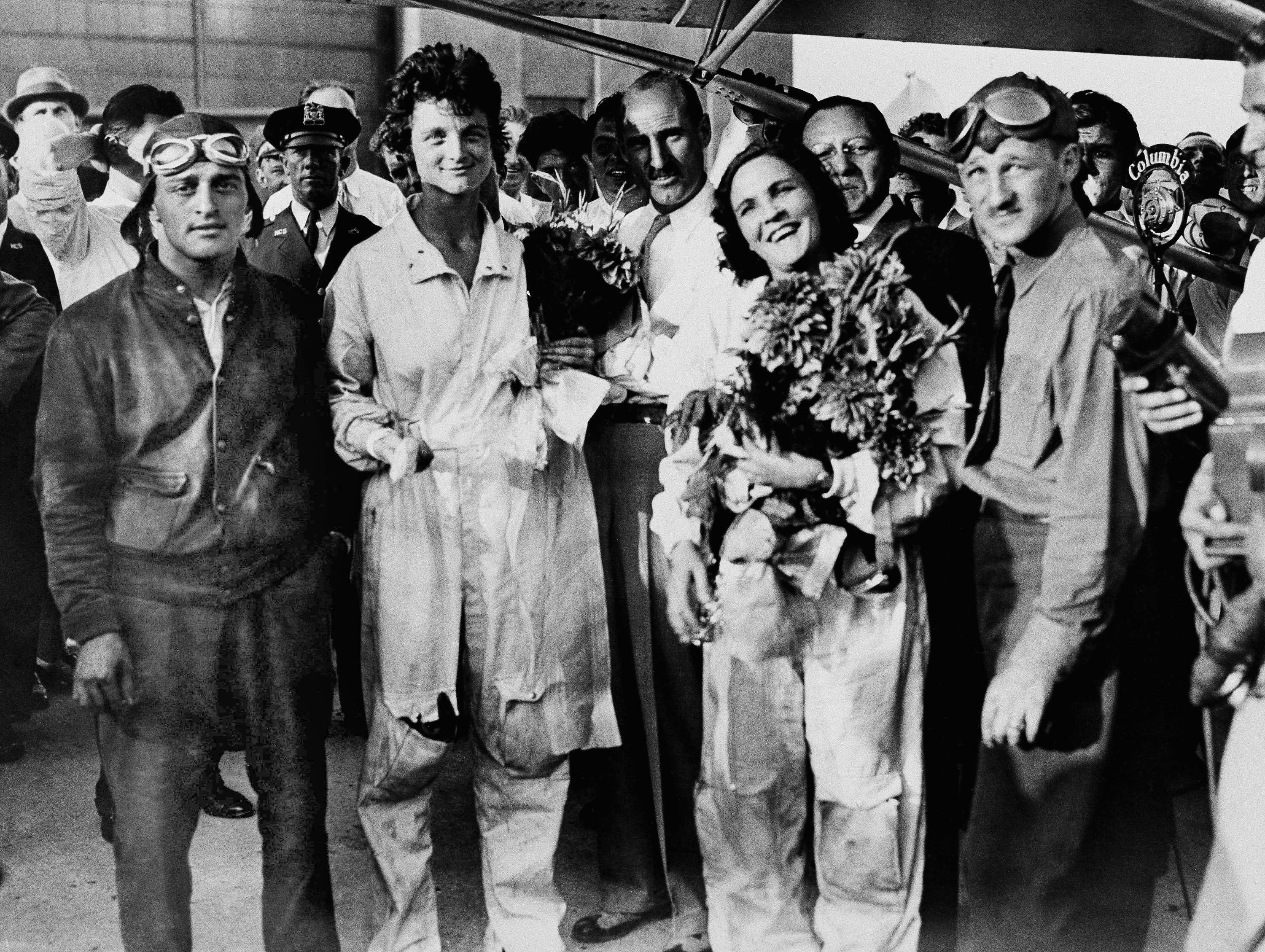 Louise Thaden (left) and Frances Marsalis after alighting from their plane at Roosevelt Field, Long Island, New York, on August 22, 1932, after they set a women’s endurance flight record with 196 hours, 6 minutes in the air. Bobby Trout and Edna May Cooper set the previous record of 123 hours in 1931. Others in the photo, from left: John Runger, who flew in the refueling plane; Charles S. (Casey) Jones, noted flier; and Stewart Reiss, pilot of the refueling plane. (AP file photo)

In August 2017, the private school’s first stage will open. Enrollment in 2017-2018 will be two grades — seventh and ninth — with other grades 6th through 12th to be added each year with about 60 students in each grade. The Walton Family Foundation, run by Mr. Walton’s heirs, has contributed an operating grant of $934,850 toward the project.

After Mrs. Thaden attended the University of Arkansas, she left Arkansas for good, first to live in Kansas and then in California, where she learned to fly. As her celebrity ascended, she occasionally returned home for visits. In 1976, three years before she died, she was in Bentonville when then governor David Pryor declared August 22 as Louise Thaden Day.

School officials sought permission to name the school for Mrs. Thaden from a granddaughter, Terry von Thaden, who lives in Champaign-Urbana, Illinois. “She was very helpful and immediately supportive of the idea,” Mr. Marsh says, “and brought more descendants into the conversation so that we could secure their blessing.”

Terry von Thaden has been a professor of information science at the University of Illinois and has studied, among other things, risk management in air traffic control and aviation history. She follows in her grandmother’s vapor trail as a licensed pilot.

She traveled to Bentonville in late August and spent time with the Thaden team. She was the keynote speaker at a local aviation society event that honored her grandmother.

The team will build an archive of local history, which will include the detailed scrapbook of Mrs. Thaden’s life in Arkansas that county historian Monte Harris compiled.

There will almost certainly be another piece of memorabilia on campus: Mrs. Thaden’s childhood home, which was listed on the National Register of Historic Places in 1992. Eric Scott, the son of former Walmart CEO Lee Scott, bought the house and planned to demolish. Preservationists protested and persuaded Mr. Scott to change his mind.

One of the childhood homes of pioneer aviator Louise Thaden, which school founders hope eventually will sit on the new campus. (AMP photo by Evin Demirel)

Now Mr. Marsh hopes the house will come to campus, but there are obstacles, including a city prohibition against moving a house from one location to another within the city limits.

In the first year, the students will meet in temporary buildings. The school will open in August with 12 teachers.

Mr. Marsh hopes to instill in students a love of preserving history.

“The area is developing so rapidly there is, I think, an anxiety about the erasure of the past,” Mr. Marsh says. “I can see these kids doing really interesting documentary filmmaking where they’re interviewing elderly members of the community. …

“The kind of narrative choices you make in a documentary film are no different than you do in an essay,” adds Mr. Marsh, who taught English at The Lawrenceville School before working in administration at Princeton University. “There’s a real editing quality there.”

The Thaden School will strive preserve the past even as it transforms the area.

“Change is good,” Mr. Marsh says. “It’s how you change, and the way in which the past can be repurposed in the service of the present and future. … [That’s] what this school is all about.” 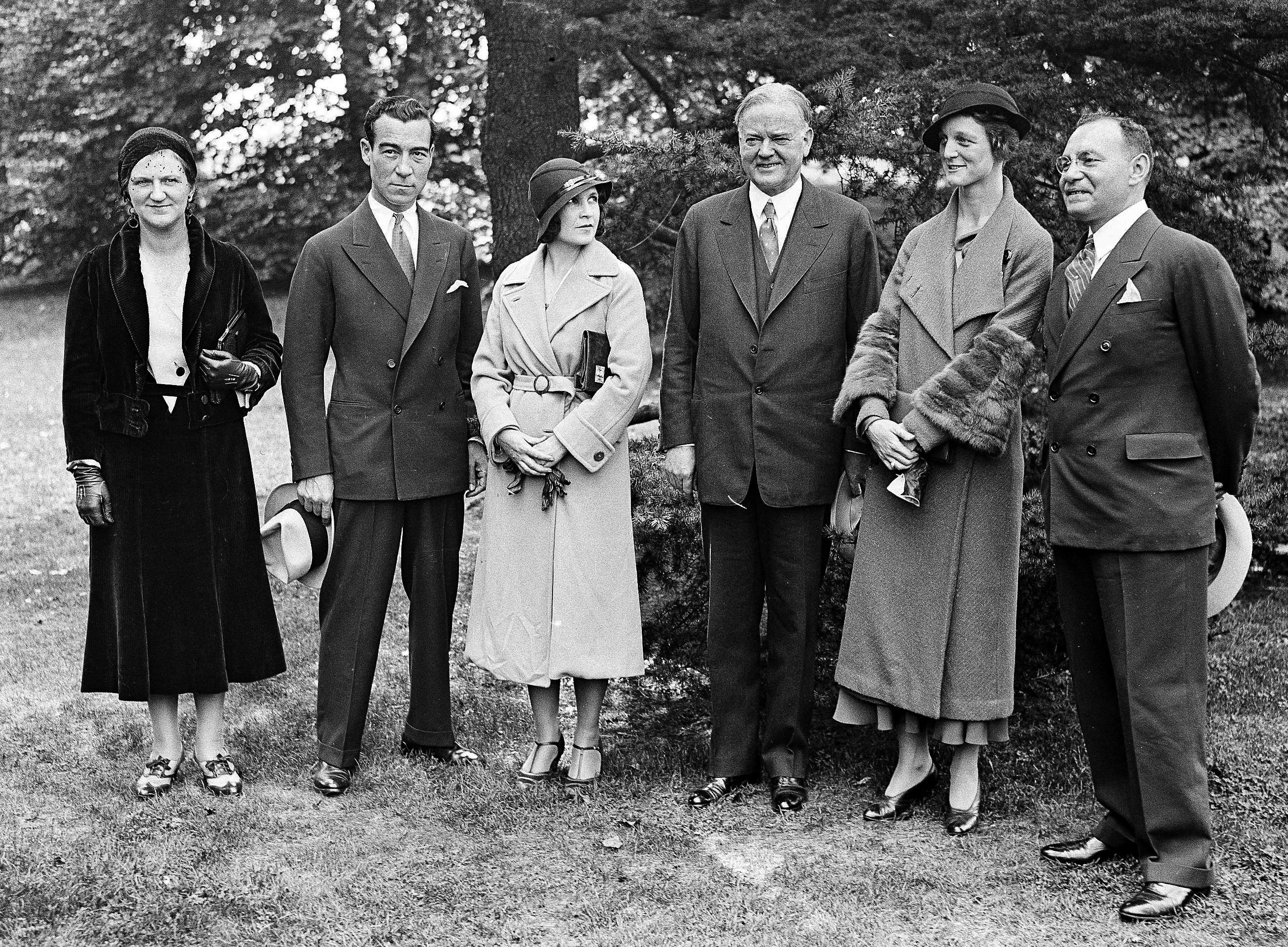 Louise Thaden stands to the left of President Herbert Hoover at the White House on September 22, 1932. Frances Marsalis, to the president’s right, was her partner in setting the women’s endurance flying record. Others in the photograph, from the left, are Irene Juno, official hostess; Clarence M. Young, assistant secretary of commerce in charge of aeronautics; and I.J. Fox, sponsor of the flight. (AP file photo)
1 comment
0
FacebookTwitterPinterestLinkedinEmail