Searcy: A Closer Look at the Soon-to-be Hulu Star

Located less than an hour northeast of Little Rock sits Searcy, a community with a population of approximately 24,000, all eager to see the town become a Hulu star. Searcy lies in the heart of White County and operates as the county seat.

The town was recently selected after a nationwide vote to appear on the streaming series Small Business Revolution. As a result, the community will receive $500,000 in revitalization funds for six small businesses. Searcy’s downtown will serve as the setting of the online series.

When Searcy was notified it was in the running, the town banded together and launched a campaign to encourage people to vote online.

“They’ve all been very kind and supportive of us,” says Buck Layne, CEO of the Searcy Regional Chamber of Commerce.

And on the day the winner was announced? Thousands of Searcy residents packed into an auditorium and went “absolutely crazy,” Layne says.

The chamber CEO was there for the announcement, and describes it as one of the most euphoric and emotional events he’s witnessed in the community since he first arrived.

“People are still talking about it. We’re extremely excited to be on the show,” Layne says.

Tara Cathey, vice president of Searcy Regional Chamber of Commerce, says one of the show’s hosts described the scene as “bananas.” 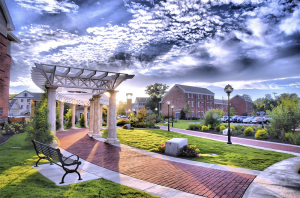 The First Ladies Garden on the campus of Harding University is a tribute to the mothers, grandmothers and other women who have contributed to the university.

The university employs approximately 400 people and has more than 5,000 students, according to Layne. The students

come from all 50 states and 54 nations around the world.

Cathey says Harding students are estimated to spend $31 million a year in Searcy’s local economy; visitors to the university spend another $17 million annually.

Whenever Harding puts on a big event, like Spring Sing, Layne says all the local hotels fill up.

Searcy Mayor Kyle Osborne says the students and everyone else in town are very friendly.

“The people really are wonderful.”

Combine that with a low crime rate and proximity to Little Rock, Greers Ferry Lake and quality trout fishing, and Searcy makes a nice place to put down roots.

“It’s just a wonderful place to live,” the mayor says. “There’s always something going on.”

Osborne says Searcy has four large city parks that stay busy, prime spots for trout fishing nearby, along with a bowling alley, exercise facilities, movie theaters, an event center for concerts, a new indoor pool, and during the summer, the city shows movies in the park for free.

Searcy is home to a number of festivals, outdoor events and well-manicured parks that increase the quality of life of its residents. Festivals include Art Beats & Eats and Get Down Downtown.

Layne echoes the mayor that there’s always something going on in Searcy, especially with festivals that get put on several times a year. The town hosts monthly get-togethers called Arts Beats & Eats that feature music, food trucks and more.

“[Searcy’s] got so many people out, meeting each other, meeting other people,” the chamber CEO says.

On top of that, the city has another outdoor festival in September called Get Down Downtown. It’s a roaring two-day event with great music and food. It regularly draws in roughly 10,000 people, according to Layne.

A couple of days before Thanksgiving, the Holiday of Lights begin when the city lights up its downtown and parks. They’ve also added a skating rink. 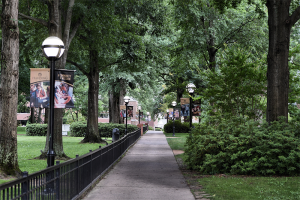 And if all that wasn’t enough, the White County Fair has been ranked among the top 10 in the nation.

When it comes to the jobs market, Layne says the local economy is “pretty darn good.” The challenge now is to find workers for existing jobs.

“It’s a continual challenge. We’re working with our school systems and manufacturing folks to develop a workforce for tomorrow’s jobs,” he says.

The city is also working with Economics Arkansas on a pilot program to bring educators and industry folks together, according to the chamber CEO. Searcy was selected for the pilot program along with Russellville and Hot Springs. It aims to help the city figure out what jobs are available for workers in manufacturing and distribution.

Layne says the largest employer in Searcy is Unity Health, with about 2,400 workers. Walmart’s distribution center in the city and Land O’Frost also have a significant presence and employ a large number of Searcy residents.

A couple of years ago, certain Searcy restaurants were given private club licenses to sell alcohol in the otherwise dry White County. Layne says that’s worked out well for local restaurants.

With about four private clubs, parking lots are full almost every night.

As for anyone planning to move to Searcy, the mayor encourages people to park downtown in the evening. Walk through and see how nice it is, he says.

“We offer just about anything you want to do in a larger community,” he says. “We love it when people come and visit. And we love it more when people move here.”

Layne says he’s excited looking toward the future. Searcy just got a new shopping center, and several new restaurants are considering a move into the community. That, and the future Interstate 57 designation Sen. John Boozman (R-Arkansas) helped the town secure is something else to look forward to in terms of growth, according to the chamber CEO.

He says, “We’re excited about where things stand right now.”