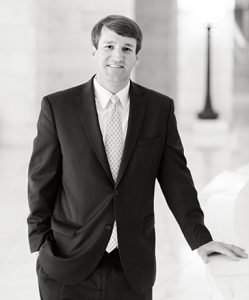 “We are excited to be in business with Robert,” Capitol Advisors Group managing partner Bill Vickery says. “He is bright, very well-respected and already accomplished at a very young age. Robert represents both the present and future for the business of politics in Arkansas.”

In addition to overseeing the Governor’s 2018 reelection bid, Moery previously served in the Hutchinson administration as the legislative director and a point-person for agriculture, transportation, natural resources, game and fish, insurance, and racing and gaming issues.

“I will always appreciate the opportunity Governor Hutchinson gave me to serve the people of Arkansas. I could not have asked for a better last five years working with the Governor and his team,” Moery says. “I’m very excited for the future relationship between Broadview Strategies and Shiloh Strategic Advisors. Being able to stay in the government arena and help clients solve their issues, implement effective policy and grow their brand will be my focus. Bill, Mitchell and John have a wealth of experience in public and government affairs, and I’m thrilled to be a part of their established team.”

“Robert has been a key asset to me from my gubernatorial race in 2014, through the last four years of my administration, and as the campaign manager for my re-election team this past year. He brings together a great blend of knowledge and experience that I know will be valuable to Broadview Strategies’ and Shiloh’s success. I wish him all the best.”

Going Solar: A Guide to Solar Power for Your Home or Business

View from the Senate: Schools Get Letter Grades in Annual School Report Cards

Get to Know the Candidates: Dr. Greg Bledsoe