The Rising Cost of Labor 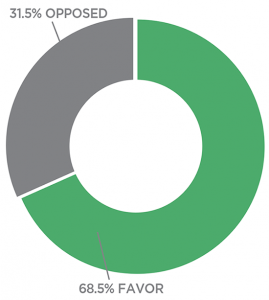 With the passage of Issue 5, Arkansas’ minimum wage will increase 76 percent over a seven year span.

While Arkansas workers at the lowest end of the pay scale are celebrating, Arkansas business owners are increasingly nervous about their futures.

In November, Arkansans voted in favor of Issue 5, the Minimum Wage Increase Initiative, which will raise the state’s minimum wage $2.50 per hour incrementally over the next three years. That was a win for the working poor. But it comes at a cost for businesses, who in the span of seven years, will see the minimum wage increase 76 percent compared to what it was just five years ago.

Employers who rely on minimum-wage workers will be directly and primarily affected and will have to adjust their prices to cover costs, but the increase will likely not be limited to one strata of the economy and will impact all types of businesses.

“The rise in minimum wage rates won’t affect us directly on our everyday labor costs,” says Keith Wortsmith, president of Dash Heating and Cooling. “It will indirectly affect us through the supply chain as suppliers will raise their prices to cover their labor increase. We will most likely see this in overhead expenses, such as fuel, as we expect their prices to increase to cover their costs as well. I expect the trickle-down effect is going to cost everyone more. It may start with one business raising prices 3 percent, but as it goes through the supply chain each business in the process will have to increase their costs to offset any losses, and that will be passed on to consumers.”

That’s good news for Kristin Foster, director of a child hunger agency in Russellville who served as campaign manager for Arkansans for a Fair Wage, which led support of the measure.

“I see parents who are working full time – all the time – and still struggling to make ends meet,” Foster says. “But for me, personally, it was very important because we have such high rates of poverty and see so many people struggling to afford their basic necessities. The cost of groceries, housing and other basics have gone up for years. But wages haven’t come close to keeping up. By gradually raising Arkansas’ minimum wage to $11 an hour, we can help hard-working people meet their basic needs. This is something that has been a need for Arkansas for a long time.

“At the same time, we’ll help small businesses by putting more money into people’s pockets that they can spend on goods and services in our state.”

While no one wants to see anyone go hungry, political and business leaders are concerned the minimum wage increase could disrupt a delicate economic balance.

Before the election, Gov. Asa Hutchinson said he was not in favor of the measure. He believes the increase will be detrimental, especially for young people looking for their first work experience.

“It is playing with fire to set a wage rate three years from now when we do not know the economic conditions that far down the road,” he said. “I support raising the minimum wage, but it should be done through legislative action at such time when the economic outlook supports the action.”

Foster says the issue was popular with voters, who put the measure on the ballot because the 2014 increase didn’t go far enough.

“Unfortunately, that’s something that we hear legislators say quite a bit. They think the legislature should control it, but in Arkansas, they haven’t actually done that since 2006,” she says. “Our legislature has not implemented a minimum wage increase in 12 years. We’ve seen the cost of living continue to increase, but have not seen our legislature step in. People are hungry, people are suffering, and we can’t sit around and wait for them to take care of it. No one was willing to make a commitment actually to do it. So we had to take it to voters, and, ultimately, they approved it.”

Randy Zook, president and CEO of the Arkansas State Chamber of Commerce, says it will take a while for the increase to affect the economy visibly, but its impact will be felt almost immediately.

“A lot of small business owners, in particular, are alarmed at the impact on their businesses, and companies aren’t going to just absorb this,” Zook says. “They’re going to pass it along in either higher prices or reduced employment opportunities. They’ll have to adjust their costs. They’ll have to adjust their labor expenditures in order to offset it. They can’t just take it out of their right pocket and put it in their left. The people it’s intended to benefit will be the ones who pay the price for that.”

He pointed to child care as one example of an industry that operates on razor-thin margins that will see changes sooner rather than later.

“Many of the daycares across the state are announcing price increases from $20 a week per child because of the added costs for their employees. So if you’re a single parent or young family, that’s an additional thousand dollars a year per child. That’s a pretty good clip.”

Zook agreed with Hutchinson that first-time job seekers, along with the unskilled and undereducated, will see fewer opportunities. Many businesses are already investing in automation – from kiosks at fast food restaurants to self-checkouts at grocery stores to robotic floor cleaners at big-box retailers – because they see the investment in technology as having a higher return on investment than hiring a person who will need to be trained and could leave at any moment, requiring the owner to duplicate effort and spending to, hopefully, maintain the status quo.

State, county and city governments, whose revenue comes from fixed tax rates, will also have to adjust to the pressure the cost increase will put on their budgets, he says.

Zook is also concerned that, for business owners, the dollar may be greener on the other side of the state line. Arkansas’ minimum wage was higher in 2018 than the neighboring states of Oklahoma, Louisiana, Mississippi, Tennessee, Kansas, and Kentucky, which all had a minimum wage of $7.25. Businesses may choose to locate elsewhere if their costs are lower than in the Natural State.

“It’s not just a silver bullet that’s going to solve everybody’s problems,” he says. “It’s going to create a lot more problems than it solves because we’re going to be completely out of step with all of the surrounding states.”

The False Promise of Minimum Wage