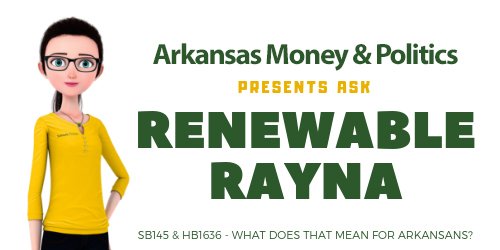 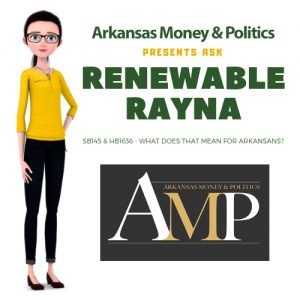 Renewable energy has been a hot topic at the Arkansas State Capitol in 2019.  On February 27, Governor Asa Hutchinson declared that the 27th of February would be Arkansas Advanced Energy Day. According to recent studies, it has been proven that advanced energy technologies are generating jobs, energy savings, and have the potential to expand the Arkansas economy. According the governor’s declaration, “Energy efficiency, solar, wind and alternative fuel companies employ more than 16,000 workers and have annual sales of more than $1.7 billion in Arkansas.”

Succeeding this declaration, two bills were signed this month that should contribute to the growth of solar energy in the natural state, Senate Bill 145 (now Act 464) and House Bill 1636 (now Act 519). 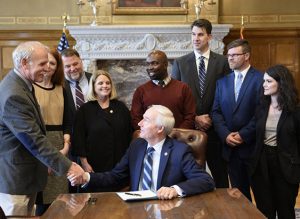 Senate Bill 145 was introduced by State Senator Dave Wallace (R-Leachville) and State Representative Aaron Pilkington (R-Clarksville), and it is designed to build a broad foundation of support ranging from companies like Walmart, Target, Mars & Unilever to the Arkansas Advanced Energy Association; from the Arkansas General Contractors Association to both the UALR Young Democrats and College Republican chapters.

In a vote of 83-5, House members gave their endorsement to Senate Bill 145, that would enable third-party financing for those seeking to deploy solar. The financing tool is particularly essential for non-tax entities, such as schools, churches, cities and counties, colleges and universities, state agencies, and non-profit organizations. With the opportunity of a third-party solar services contract, non-tax entities could take full advantage of federal incentives and lower the cost of a solar array, unlocking capital to invest in local communities.

The method has become particularly popular as costs for solar continue to fall and business and residential interests increasingly see solar as a viable energy option.

Third-party financing allows solar leasing and power purchase agreements. In states like Arizona, Colorado and California, third-party agreements have led to the procurement of approximately 80% of residential solar systems, as of 2016 according to Center for the New Energy Economy.

The most impactful solar array is one that you own directly as you retain 100 percent of the benefits. Unfortunately, this route of ownership is not always a feasible one. SB145 allows more Arkansans, such as tax-exempt entities, to participate in the economic benefits of solar.  Arkansas joins 26 other states who allow third-party leasing as it pertains to solar.

All renewable energy projects are required to work in parallel with the local electrical distribution system to ensure no disruptions or subsidies are incurred by other customers of the utility. 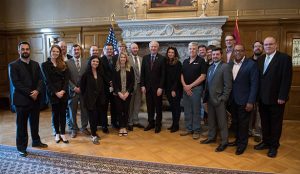 This bill pertains to the Arkansas Energy Performance Contracting (AEPC) program administered by the Arkansas Energy Office.  It provides the state’s public entities the opportunity to utilize guaranteed energy savings to improve the energy and operational efficiency of their existing facilities without the need for upfront capital.

In a 34-0 vote, Senators gave their endorsement to House Bill 1636, which would enhance the state’s energy performance contracting program by providing public entities with supplementary flexibility and support utilizing the economic development and cost-saving initiative.

Previously, the AEPC program would allow energy cost savings contracts to go out as far as 20 years, but HB1636 would allow a guaranteed energy cost savings contract to be extended if its energy cost savings measures possess either an active equipment warranty period or a combined useful life in excess of 20 years. The contract length extension would put Arkansas in line with federal government standards and allow for solar systems, which can be useful for over 25-years, to become an economic driver of projects given the decreasing costs, improved efficiencies, and long warranties of equipment.

Additionally, the proposal also would allow school districts, who often requested instruction from the ADEQ Energy office and even followed by program rules, to opt into the existing program rules and regulations, therefore allowing all public entities the ability to employ the ADEQ Energy Office as a program administrator.

“The Arkansas Energy Performance Contracting program is a significant economic development initiative for the state, a driver of advanced energy jobs and a key cost-saving tool for Arkansas’s public entities. The program’s success has been a top association priority since AAEA members helped secure its adoption in 2013. Act 507 will help spur energy efficiency and renewable energy projects among the state’s public entities in two ways: 1.) by allowing schools to participate in AEPC and 2.) by allowing contract terms to align with the warranty or useful life of energy measures, providing additional flexibility for customers,”  said Katie Niebaum, AAEA Executive Director.

Since its inception in 2014, the program has generated 21 projects, either completed or in development, with a total executed contract value of more than $102 million guaranteeing nearly $150 million in energy savings. By the end of this year, those figures will have more than doubled, and about 9,000 Arkansas jobs are linked to energy savings equipment and services fueled by the AEPC program, Niebaum said.