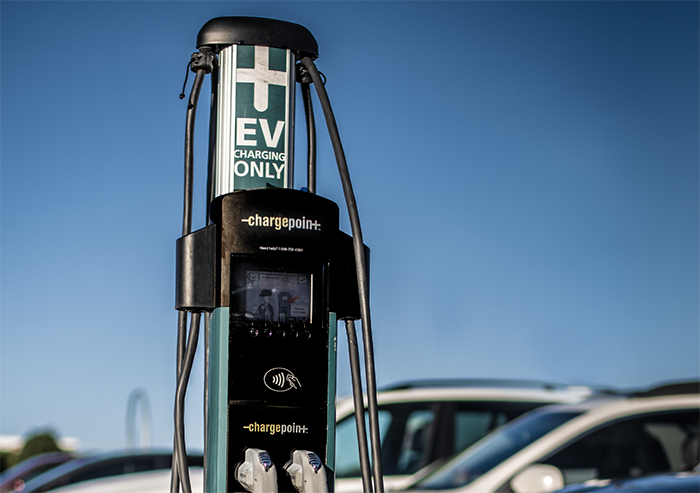 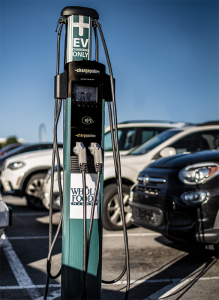 Stores like whole foods in little rock offer electric vehicle owners the opportunity to “fuel up.”

Multiple organizations and businesses across the state of Arkansas are doing their part and playing a significant role in taking the steps necessary to make the Natural State a cleaner and more self-sufficient place to live, as well as a beacon for development of the future.

The number of advocates for making Arkansas more energy efficient and sustainable grows with each passing year. From electric cooperatives, utility companies, colleges and manufacturing plants installing solar arrays to the installation of more charging stations for electric vehicles, everywhere we look the “future” that had previously only been dinner-table discussion is right before our eyes.

An essential player in making Arkansas more sustainable is Entegrity. As the words energy and integrity that form their name may suggest, Entegrity is a business that specializes in the implementation of energy conservation and renewable energy projects. Headquartered in Little Rock, Entegrity now has eight offices throughout the country and has worked on projects in more than 30 states.

One reason for the number of fingerprints Entegrity has left on the growing sustainability of Arkansas is the company’s ability to tailor their services to customers’ needs, desires and even limitations. Entegrity does its part by offering solar installation, energy savings performance contracting, commissioning, energy modeling, building testing, lighting solutions, renewable energy, water conservation and sustainability consulting. This comes from the two distinct branches they service: new buildings and existing buildings.

For new builds, Entegrity can provide not only the sustainability construction efforts but also green building modeling, commissioning, testing and certifications.

For existing buildings, it is often a conversation built upon providing greater energy efficiency. In fact, the company boasts that it can offer savings of 25 to 40 percent on annual energy costs.

Two projects Entegrity has worked on that have provided some of the most substantial impacts were for the Pulaski County government and the Batesville School District.
For Pulaski County, Entegrity solved a $2 million energy bill problem, providing annual savings of around $440,000 and reducing the large environmental footprint of all of the county’s buildings. According to Pulaski County Judge Barry Hyde, this project would “ultimately save taxpayer dollars, improve county facilities, create jobs and allow Pulaski County to be a leader in energy performance.”

At Batesville School District, Entegrity took on a job that cost $5 million to assist Batesville in reducing their physical footprint, increasing revenue streams and trimming operational costs. An investigation conducted by Entegrity revealed inefficient lighting, thermostats and windows and dated HVAC equipment. They corrected these deficiencies and installed a solar canopy at the Batesville High School. Altogether, these changes resulted in a 40 percent energy reduction in energy costs, savings the school district used to increase their teachers’ salaries.

Arkansas Money & Politics has covered the wide-reaching benefits of solar power several times over the past year, in both print and online. When speaking about a more sustainable future, that is a critical piece of the puzzle. But it is not the only one.

The growing popularity of electric vehicles can be traced back to two distinct factors: lower costs via higher efficiency and less required maintenance and lowering one’s environmental footprint through reduction of fossil fuel dependency. Cars powered by electricity are widely considered to be one of the most sustainable means of transportation available today.

When speaking on the sustainability impacts and projected future of electric vehicles in Arkansas, there are few more qualified to lead the discussion than Jennah Denney, with Today’s Power, Inc. Although the bulk of the measures Today’s Power has introduced over the years have involved the installation of solar arrays, they are aggressively moving the needle of the electric vehicle movement, as well. First and foremost, by installing eight smart charging stations at the Arkansas Electric Cooperatives’ home office in Little Rock.

“We have two parts of our electric vehicle program,” Denney says. “One is a portion of our business that helps not-for-profit entities in Arkansas take advantage of rebates and monetizing the depreciation of the asset. We also have a partnership with McClarty [Auto Group] to help with the inventory [of electric vehicles], because we have realized that so many parts of Arkansas do not even have dealerships that can accommodate electric vehicles.”

The second area Today’s Power addresses to increase the electric vehicle market is with the installation of additional charging stations so that all of Arkansas has access to charging ports, rather than just the big city hubs.

Range anxiety, as it pertains to electric cars, is a car operators’ fear that the vehicle they’re driving won’t have a sufficient charging range to reach a desired destination, thus leaving the operator stranded. Most Arkansans know how it feels to run out of gas in the middle of the road, and while hitching a ride or walking to a gas station is inconvenient, it is much less stressful a hypothetical than being in the middle of nowhere in an electric vehicle, when the nearest charging station may lie dozens of miles away.

In a state like Arkansas, public charging infrastructure is available, but only in select pockets — specifically in the central and northwest portions of the state, with little to no connections in between. This is an incredibly important issue to eliminate because the affordability of electric vehicles is now on par with that of internal combustion engines. But if charging access is limited, and consumers are afraid of getting stranded, the affordability is null and void.

To combat these limitations and anxieties, Denney has been urging utility companies to play a larger role in becoming experts in all things electric, which would include helping their customers become more informed on how to adopt an electric vehicle, as well as convincing utilities, cities and businesses to install additional public charging stations in more areas throughout the state, specifically highways.

“Utilities in Arkansas are starting to form programs that incentivize electric vehicle purchases and charging stations, and Arkansans should be urged to reach out to their utilities about programs like that,” Denney advises. “I also encourage business owners to think about installing charging stations at their businesses for not only an employee perk but as an identifier that they are conscious with their social responsibility and are choosing to be a leader in the green economy.”

As electric vehicle popularity increases, charging station accessibility—whether at restaurants, malls, state parks and other destination spots—will begin to shift the paradigm of where people choose to go, in Denney’s opinion. If faced between two like-for-like choices, an electric vehicle owner is sure to choose the one with a charging station, so they charge while they shop, hike, eat or watch a movie.

Denney references a state like Oklahoma, which just recently formed an Electric Vehicle coalition in partnership with statewide utilities to deploy charging stations every 50 to 100 miles throughout Oklahoma. “That would make me feel secure,” says Denney.

Another area where anxieties exist is in the costs associated with going electric for individuals. Now that the prices for electric vehicles are level with those powered by fuel, one of the only additional investments an individual would need to make would be in installing a charging station at their home, and it is not near as scary as it sounds.

“Residential charging stations start at about $500,” Denney says. “You will probably need an extra 240-volt upgrade put into your garage or wherever you park, which can range from an extra $500 to $600 as well.” For a frame of reference, a 240-volt outlet is usually the same as what you can expect a to hook up a washing machine or dryer.

Charging your vehicle at home will result in a price increase on your electric bill, but Denney advises not to be afraid of that either. Generally speaking, adding an electric vehicle to your home electrical output adds an additional 2-6 kW to your bill, which Denney likens to the pull of a standard A/C unit.

Plug In America estimates that operating an electric vehicle is about the same as paying for gas at $1 per gallon. Couple that with the fact that electric vehicles are much cleaner and thus result in less money spent on maintenance costs, and a charging station install plus a few extra dollars on an electric bill are more than paid for with lifetime savings—and then some. These leftover dollars then “pump” more money back into local economies, rather than being wasted on filling up gas tanks with imported fuel.

As for the future of electric vehicles in Arkansas, Denney is optimistic.

“I’ve seen projections from about 2020 to 2035,” Denney says. “Right now you are seeing about 1 percent of new vehicles across the country being electric, and Arkansas’ average is on par with that, so we are staying up-to-date with the nationwide trends. A few different studies have said that by 2030 we would be at a 5 percent mark. I know that does not sound like a lot, but at 5 percent, electric vehicles can become a grid asset, because there will be so many of them that we will see vehicle-to-grid and vehicle-to-home programs be put in place.”

Now that the anxieties are in your rearview mirror, whether it’s making the decision to finally pull the trigger on that electric vehicle you’ve had your eye on or bringing in an expert to evaluate energy efficiency at your home or business, it’s easier than ever to switch to more clean methods of transportation and energy consumption. A more sustainable Arkansas is better for all of us today—and for the generations to come.