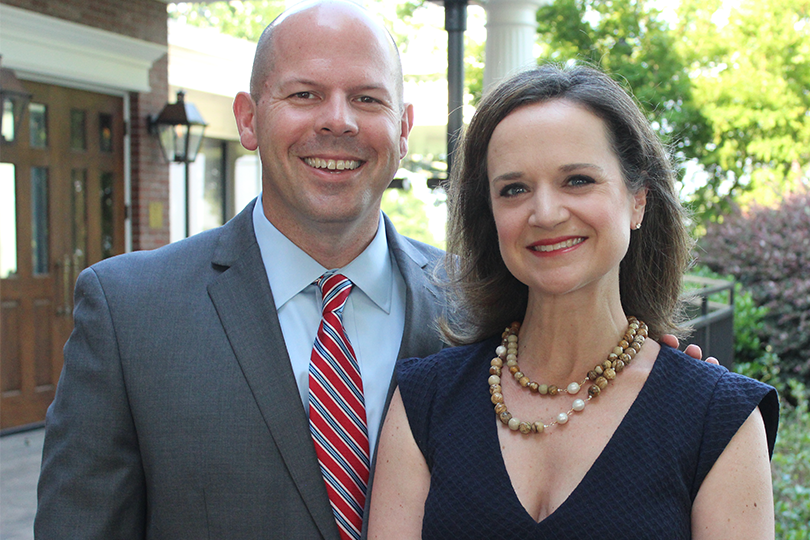 In Power Couples, Arkansas Money & Politics introduces readers to the most interesting and influential pairs in the state of Arkansas. Matt and Casey Finch are just one set of #PowerCouples. To nominate a couple, email editor@armoneyandpolitics.com.

Not everyone gets a second chance like the one that took Matt and Casey Finch from high school sweethearts to married parents of three.

“We met each other through a mutual friend in high school,” Matt said. “Dated for over a year and then took about a 15-year break to figure out that we were the perfect people to put up with each other.”

Life didn’t stand still during that time; both Casey and Matt went off to college (as it happened, the same one, Westminster College in Fulton, Missouri) after which Matt came home to Bowen School of Law, something he’d wanted to do since middle school.

“I was probably in fifth grade and L.A. Law was such a thing,” Matt said. “Those guys looked like they were having a lot of fun. The only two things I’ve ever really thought about being professionally are a football coach or a lawyer. I wasn’t good enough at football to get that opportunity.”

“I grew up with a retail family,” she said. “My family in Fort Smith owned a department store, so I kind of had this in my blood. My first job in high school was at [Little Rock boutique] The Full Moon, working there summertime, after school, things like that. I just kept with different stores that I enjoyed working at and realized I’m kind of good at this. I think I might just stick with it.”

Not only did she stick with it, she returned to her roots and purchased The Full Moon five years ago.

“I always liked challenges, but I never really thought owning my own business would be something I’d do,” she said. “I thought I’d be a lawyer or I’ll be a doctor or whatever, but then when I realized after being in the field for a while that I was actually good at it, that was kind of how it led me to stay in it.”

Matt’s career led him to three law firms, the latest of which, Gill Ragon Owen, he’s been at since 1998. He specializes in commercial litigation, an emphasis he describes as “a lot of dirt and a lot of debt.” He might have added “desperation” during the last financial crisis.

“I represent banks and title companies,” he said. “I was kind of coming into my own in my practice when the crash hit. A lot of our clients were dealing with the same cleanup issues that the entire country was dealing with and we saw them through a lot of those troubles. Hopefully did it to the best of our abilities and got it back cleaned up and where they needed to be.”

Eventually the couple, who had lost touch after leaving college, reconnected through Facebook and were married in 2010. In addition to Casey’s two teenagers from a previous marriage, they have a 5-year-old daughter, Libby.

“Thank you Mark Zuckerburg,” joked Matt. “Everybody’s being hard on him right now, but I’m still a big fan.”

The demands of their careers are compounded by their community service. Most notably, they headed up 2018 Southern Silks which raised $140,000 for Methodist Family Health. Matt has also sat on the board of CARTI’s Ragin’ Cajun event and headed up the inaugural 30 Miles of Men for the Komen Foundation. Time constraints notwithstanding, the pair sees community service as essential.

“I want our children to grow up with a giving heart and the difference that you can make in your community is important to me,” Casey said.

“I was in college and my mom sent me a little clip. It was an anonymous quote that said, ‘Aim for service, not success, and success will follow.’ I kind of like that idea,” Matt said. “In a community like Little Rock, people really appreciate when you put in the time and effort. It’s good to do good deeds and everything, but to get that fulfillment that it’s appreciated is nice as well. I think you get that from our community.”