I’d never met Ronnie Pool and was wondering how I’d recognize him at our rendezvous at an eatery in Lonoke. But when a pickup truck pulled in with a “GLDFISH” license plate, I knew he’d arrived.

Pool, along with his older brother Danny, is a third-generation employee of Pool Fisheries, the firm founded by their grandfather, Reuben Pool. The elder Pool, owner of a 40-acre tract near Lonoke, originally delivered milk and eggs from his horse-drawn buggy. He allowed a friend to build fish ponds on his land and soon realized raising minnows offered a better return than his buggy route. Using a mule and slip, he constructed other ponds and eventually got prosperous enough to buy more land and an old John Deere B tractor to create additional reservoirs. The family patriarch, who’d gone to the west coast during World War II to work as a welder in defense industries, came home and used his mechanical skills to devise new tools and machinery for his fledgling business.

When the minnow niche got over-saturated, Reuben branched out, adding goldfish to his operation in 1959. Today, nearly 60 years later, Pool Fisheries is the largest goldfish hatchery in the world, producing some 2.5 million of the small, shimmering beauties every week of the year along with over a million Rosy Red minnows and lesser numbers of specialty fish (and even a few tadpoles and turtles). The business includes 400 ponds (2 to 3 acres each), of which 250 are used for goldfish production. Over the course of a year, each acre will yield roughly 1000 pounds of fish. 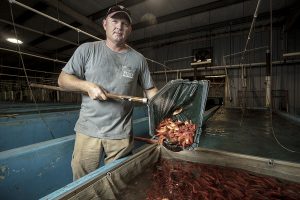 During the spring, adult brood fish lay their eggs on mats which are placed in indoor hatcheries for incubation. Eggs normally hatch within three to five days. The fry, or young fish, are transferred to the outdoor ponds six to eight weeks later when they’re about three-quarters of an inch long. They’re fed daily with protein-rich Arkansas products: soybean meal, rice bran, and cottonseed meal. When the fish reach market size, they’re captured, graded, and prepared for shipment.

The same characteristics that make the Lonoke area prime for rice production – rich dirt underlain by a clay subsoil and plenty of water – make it perfect for aqua-farming. And the proximity to Interstate 40 helps with distribution. Every Wednesday morning one of the Pool’s 18-wheeler tankers heads east, making about half a dozen deliveries to middlemen and eventually reaching Connecticut before the two-man team returns to Lonoke Friday night. On Saturday mornings another tractor-trailer goes north to serve the Midwest, turning back toward home only after multiple stops culminating with a final drop-off in Toronto. Each truckload contains approximately a million fish, usually about 60% goldfish and 40% minnows. Shipments to the western states are performed by third-party vendors.

FedEx plays a big role in the business, regularly delivering countless packages to Pool’s biggest customer – the PetSmart chain which alone requires about 1.5 million goldfish every week. In fact, Pool Fisheries is easily among FedEx’s top customers in the state, one time coming in at the number one spot. When the morning shift is packing several hundred boxes of goldfish for overnight shipment to distant destinations, it’s a sight to behold.

Readers may be shocked to learn that most of these cute little Arkansas-bred creatures aren’t destined to swim lazily and grow fat in kitchen counter fishbowls, but will be sold as “feeder fish” – that is, live food to be served to fish higher up the food chain. The larger fish found in aquariums typically prefer a wiggling diet – and one to two-inch goldfish are often at the top of their menu. Many nature centers (such as those operated by the Arkansas Game and Fish Commission) and zoos through out the country depend upon Pool Fisheries to provide nutrition – in the form of live goldfish – for the featured species in their tanks. 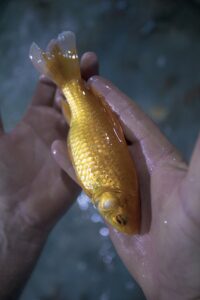 400 ponds are used for goldfish production

Not all of Arkansas’s goldfish are sold as feeder fish or pets. In 2016 more than one million of the state’s goldfish were shipped by tanker truck to Tempe Town Lake, a 225-acre reservoir on the Salt River near Phoenix, Arizona. After the two-day journey, they were released into the lake to eat the larvae of midge flies, an annoying gnat that was aggravating visitors at adjacent parklands. This biological solution using Arkansas goldfish kept harmful chemicals out of the popular lake.

Ronnie is rightfully proud of his family’s success and notes that his Lon Pool, his father, still comes by the office every day to check on things even though he officially retired a few years ago. Nevertheless, he looks forward to the day when his children and their cousins – the fourth generation – take over the business. Raising 200 million fish a year is hard work, fraught with potential problems. Labor is a constant worry says Pool and so is depredation. “We have to raise twice as many fish as we plan on selling,” he says, citing the impact of voracious frogs, turtles, snakes, and birds. Pelicans and other seabirds have discovered the Pool ponds and those of their neighbors, and it’s a constant battle to run the birds off.

Another problem has been the gradual but steady decline in the demand for goldfish. Twenty-first century families simply don’t keep these small pets like in years past. Twenty years ago there were six or seven goldfish farms in Lonoke County, but that number’s now down to three. To survive, the Pool family has diversified and now produces more exotic species such as koi that deliver better margins.

But it’s a rewarding line of work. The goldfish industry alone contributes $50 million annually to the Arkansas economy. Pool recognizes the Cooperative Extension Service at the University of Arkansas and the Aquaculture/Fisheries Center at the University of Arkansas – Pine Bluff for their contributions to the state’s fish farming sector. Scientists in these organizations, for instance, have developed innovative ways to improve spawning success, making the hatcheries much more efficient.

Guests are welcome at Pool Fisheries. Local school groups arrive regularly for tours and random busloads of visitors have shown up on occasion. “People are amazed by the sheer volume of fish,” says Pool. It’s a reaction I can readily confirm.

When asked what he does to relax, Pool says he and his family spend quality time at their place on Greers Ferry Lake. But he’s not much of a fisherman. “No way,” he says, shaking his head. “You’ll find me on the golf course.”

From Our Editor: Backbone of America