Developers are breaking ground today, Sept. 17, on a new upscale residential community in Rogers in the far reaches of city limits that will include a partnership with area builders.

The development, called Scissortail, will be located on Haxton Road, west of Highway 112, and will feature 263 lots on 147 acres.

“It’s a piece of land that’s very nice and suited to the development,” Tulsa-based Bob David of Leadership Properties said by phone late last week. David, along with partner Julie Vaught of Fayetteville, are the project’s developers.

“It’s a great location. [Interstate] 49 is so congested, but [Highway] 112 is so much more drivable. It was also an attractive price.”

David, also developer of the OakTree subdivision in Bentonville, said the team invested about $1.5 million in the land for Scissortail. He said the project’s construction value will be around $100 million.

Scissortail, named after the Oklahoma state bird, will be a private, gated subdivision broken into three smaller communities.

Individual homes will be 3,000 to 6,000 square feet with price tags ranging from $400,000 to more than $1 million. The community will include a clubhouse, two pools with a pavilion, a sport court, fitness room, playground and an area for bocce ball and horseshoes. Monthly association fees will be around $100, David said.

The majority of the homes in Scissortail will be built as specs, David said. He and Vaught have partnered with eight Northwest Arkansas-area builders, who are also partners in the ownership structure of the project and will serve as its exclusive builders.

Lots will also be for sale, giving buyers the option to build their own home in collaboration with one of the builders. Individual lots will be available for sale beginning in summer 2016, and David said there are already 25 people on the waiting list for larger, higher-priced lots.

The exclusive builders include:

“The real estate market is typically a local business,” David said. “By partnering with these eight builders, each with a unique style and proven track record, we can assure those who purchase Scissortail lots and homes that they will be getting builders with decades of experience who are well-known throughout Northwest Arkansas.”

He explained that the builders also have a personal interest in the development of Scissortail, because each has committed to purchase multiple lots up front.

“When you have several people with skin in the game, you can capitalize on the vast knowledge of everyone involved,” David said. 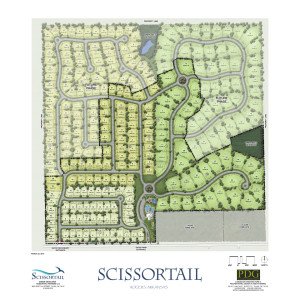 Scissortail’s location at the edges of the city limits of Rogers —technically in the Bentonville School District — could possibly strain city services, which David said would have to be extended to those future residents.

However, Rogers Mayor Greg Hines said the development will have no impact on city services or infrastructure. He said developers were required to spend extra money to extend sewer and water lines to the area and make road improvements.

Soon, Scissortail will have easier access to all of Northwest Arkansas once the new Southgate Road — which will connect Highway 112 to I-49 — extension is completed in late 2016.

Hines said the city of Rogers continues to experience population growth — now up to an estimated 64,300. And, this is one of the factors that attracted developers, David said.

Scissortail will be a boon to that area of town, Hines explained, but said he’s unsure if it will spur even more growth for the city. Because of its location so close to the city limits, Hines explained that future expansion in that area would likely mean annexation.

“It’s a beautiful piece of property,” he said. “It will draw a number of consumers in that price range. We expect it to be successful.”