Op-Ed: Fighting for Students, Past and Present

Eight years ago, I started the most important job of my life as a fifth-grade social studies teacher in Helena, Arkansas. I met students with big dreams of becoming the first in their family to go to college, along with educators and families committed to serving our community. These people changed my life and inspired me to make Eastern Arkansas my home.

As a teacher, I have learned a thing or two about refereeing an elementary school argument. It’s a lot more like Congress than you would think. Often times a disagreement would break out between a student with an idea and another student who shouted them down without proposing anything in return. Too often this is what our politics has become.

When Republicans passed $1.5 trillion dollars in tax breaks, largely benefiting millionaires and billionaires, I think Democrats were right to cry foul. However, I have not heard my own party say enough about what they would do differently. 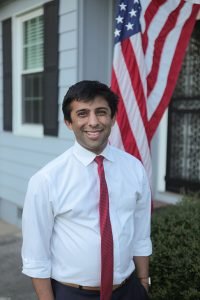 As an educator, I met students who came to school with a brain ready to learn but a stomach empty because their family is like nearly one in four people in our District who are food insecure.

I met parents of kids who worked three minimum wage jobs because they wanted to do everything possible for their child to succeed. I learned that many of these parents wanted to go to community college or attend a job training program to find a higher paying profession but found that many of these programs were financially out of their reach.

I met grandparents of my students who wanted the very best for their family, but too often had to make impossible choices between paying for medicine or basic necessities.

In the wealthiest, most powerful nation on earth, it is unacceptable to me that students go to school hungry, that parents work more than 40 hours a week but still live in poverty, and that too many of our people are denied access to quality affordable health care.

All of these things cost money. But I am proud to be running for Congress to invest in our people, not to line the pockets of millionaires and billionaires.

This year, each one of Arkansas’ representatives voted to take away health care from tens of thousands of our fellow citizens. Each of our representatives voted to slash investments in education and job training for our brothers and sisters who need it most. I believe that this must change. I am running for Congress to fight for the future of my former students, their families and our communities. I hope you will join me in this fight to bring opportunity and representation to all Arkansans.

Each month, Arkansas Money & Politics will feature exclusive op-eds provided by members of the Democratic Party of Arkansas. For the latest, click here, only on AMP.

Voice Integration in the Office

AFP Arkansas to Drop the Price of Gas...