In Springdale, a 5-year-old has entered the world of entrepreneurship, selling her own handmade jewelry, but with a twist. Lauren Eldridge co-founded Brickmaster Beauties with her mother, Christine, in 2018, and has not looked back since.

It became a dream of hers to start her own business, even at such a young age, after watching her older brother, Ryan, find financial success with his lawn-mowing business, “Ry Guy the Lawn Guy.” In her eyes, he was making his own money, and she wanted to, as well.

Lauren racked her brain and took inventory of what she had personally on which she could capitalize. It just so happened that what the Eldridges had the most of was LEGOs— thousands of them, as a matter of fact. After receiving her parents’ permission to sell her own LEGO creations, Lauren got to work. Lauren’s first handcrafted piece was a unicorn that she made for her kindergarten teacher. After that, her mother lent a helping hand that would turn the tide and form the company that we see today. Christine reflected upon a time when she was in high school when she would make and sell handmade jewelry to earn spending money. In a generational overlap, Christine combined one of her first entrepreneurial endeavors with that of her daughter. She taught Lauren how to make jewelry, then the two of them collaborated to incorporate Lauren’s LEGOs into the mix. What came from this collaboration was imaginative. Brickmaster Beauties was born.

The first inception and now signature piece of the Brickmaster Beauties jewelry line is a pair of earrings, dubbed Lauren Studs. They are 1-inch by 1-inch round brick LEGO pieces set on 18k gold, with pushback closured studs. After Lauren mastered this original creation, her imagination ran wild.

Other earring offerings that the dynamic mother-daughter duo have come up with are the Girls’ Day Out Earrings, and the aptly named Fancy Dancey Earrings. The Girl’s Day Out earrings are danglers made with small single cube LEGO blocks with gold French wire backs—perfect for special occasions.

The Fancy Danceys kick it up a notch. Also featuring a design built around single cubed blocks, these earrings have a single color-coded bead in between the LEGO and the French wired backs, making them hang lower, with a little extra flair. According to Lauren, “when you wear them, they make you want to dance!” 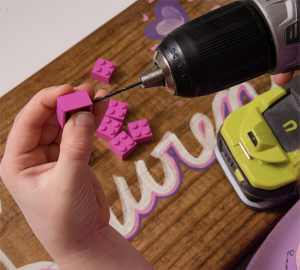 Five-year-old Lauren Eldridge, co-founder of Brickmaster Beauties, dreamed of starting her own business. So, she did.

Other concoctions this kindergartener has come up with for her jewelry line are LEGO charm bracelets including Butterfly Power, Teacher’s Favorite, Princess and of course, Fancy Dancey; LEGO necklaces ranging from Simplicity to Fancy Dancey; and LEGO bobby pins that come in either block brick or flat brick varieties.

Less than one year in, Lauren has already sold her jewelry across eight states through their online shop on Etsy, craft fairs and farmers markets. Such boast-worthy statistics are a credit to the little saleswoman herself. As her mom Christine recollects, as soon as Lauren made her first pieces, she began wearing her jewelry to school and made playground sales pitches to her classmates.

Lauren becomes the 4th generation of entrepreneur in the Eldridge family. Her father, James, recounts, “Her great grandpa, Earl, from Vermont, and later Southern California, was a blue-collar worker who owned several small businesses and worked hard every day of his life until retirement. Her grandpa, Peter, owned a furniture manufacturing company in Montana and is currently the owner of an overhead door company in Hawaii. I started and sold a furniture company here in Northwest Arkansas called James+James Furniture.”

James and Christine handle each of their children’s businesses in the same way. They assist with an initially hands-on approach to get the kids up and running, which includes funding startup materials such as business cards, website help and more. After that, it’s up to the kids to budget their upkeep costs themselves, learning vital lessons very early on. When it comes to what to do with revenue, they leave that up to Lauren. She keeps 100 percent of the profits and can spend it however she sees fit. But if she elects to put it into her own savings account, her parents will match it.

Spend a day flaunting something out of the Brickmaster Beauties’ Fancy Dancey line, and you will never want to “LEGO” of it.