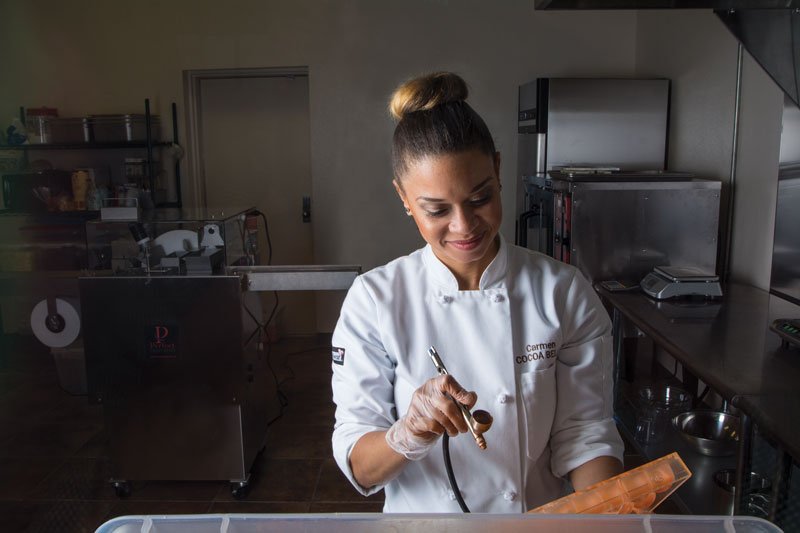 Owner and licensed chocolatier Carmen Portillo said the accolades, along with burgeoning wedding and corporate work, have brought a number of opportunities her way as well as shined a light on ways to improve and expand her production capabilities.

Case in point, Portillo was invited to show Cocoa Belle’s wares at the International Chocolate Festival in Palo Alto, California, where she would exhibit alongside exclusive chocolatiers from around the world in a region that consumes more chocolate per capita than anywhere in the country.

“They reached out to me to exhibit, but the cost for a small business plus getting all my product there was just way too expensive. It wasn’t feasible,” she said. “However, the organization itself knew that there were a lot of small-operation chocolatiers that they still wanted to feature and be involved. So, they bought my product and they actually did a pop-up store.”

“They had about 10,000 to 12,000 people in attendance that last weekend and that was a large volume that I had to get ready in less than a week.”

Portillo and her small crew met the deadline, but doing so showed her what changes would have to be made in the production process to fill the kinds of orders national and international clients expect.

“It really helped me focus and hone in on our processes and our efficiency and where we’re lacking in efficiency,” she said. “Say for instance, if I was to get a call from Whole Foods or Fresh Market and they wanted to roll me out in however many stores you don’t say no. You take the opportunity and then you come back and figure out how to do it.”

“Instead, I’ve actually started reaching out to copackers, co-manufacturers that would at least help me start the process. Having had those large orders in a short amount of time has really given me some insight; really kind of lit a fire. Like, OK, you can’t let this happen over and over again.”

After completing confectionary school – thus becoming the first and only licensed chocolatier in Arkansas – Portillo started producing her hand-made chocolates out of her home in 2007. After steadily building a following at local farmers markets and other retail outlets, she moved into Cocoa Belle’s current 1,000-square-foot production facility in 2016 where she sells direct to the public and to a growing number of retail outlets.

“What’s really exciting is recently Akwaaba Inn Bed and Breakfast company, they have one in Washington D.C., Brooklyn, the Poconos. We started doing custom stuff for them,” she said. “What’s exciting about it is they actually have a reality show on the Oprah Network. They just wrapped their first season and right after, we’ve been in touch with their marketing team and now we’re doing Akwaaba printed chocolates for the bed and breakfasts at all of their locations.”

“So, we’re really getting into our niche into this custom branding, printing and being able to elevate and personalize for businesses, which is great, being able to do things with their brand that aligns with ours.”