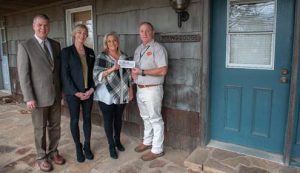 Mount Sequoyah Center, Inc., a nonprofit education and retreat center, has received a gift in the amount of $140,000 from Tyson Foods to support renovations and upgrades to Young Lodge, a farmhouse located on the property that became Mount Sequoyah in 1922. The Lodge is primarily used by Tyson Foods for its Boot Camp Program, which is designed to develop managers through professional development and skills training.

“The partnership between Tyson Foods and Mount Sequoyah has existed since January 2012, when the first supervisors and managers stepped foot onto campus,” says Jess Schload, executive director of Mount Sequoyah. “This gift is evidence of the strength of that partnership and the commitment by Tyson Foods that it will continue for years to come.”

The proximity to Tyson Foods’ headquarters in Springdale makes Mount Sequoyah an ideal location to host supervisors and managers from around the United States.

“Mount Sequoyah offers a great environment for our group to learn,” says Morris Mayers, complex training manager, with Tyson Foods. “It is good to have everything from housing to meeting rooms to dining services all in one location.”

Tyson team members stay at Mount Sequoyah for as little as one week to as many as nine weeks at a time. They have a presence on the Mountain for at least forty weeks out of a given year. Approximately 190 team members attend trainings annually, with more than 850 managers being trained since the program started in 2012.

READ MORE: Tyson and the Trouble with Tariffs

“Taking part in the upgrades gives our team members a sense of pride and ownership in Mount Sequoyah,” Mayers says.

The renovations will include replacing some windows, repairing and refinishing the exterior siding and a remodel of the kitchen, among other items. The project will begin in early 2019.

These will be the first renovations to Young Lodge since the program began in 2012. The home is named after Robert E. Young who served as Mount Sequoyah’s superintendent from 1990 to 1995. It is a wood frame I-house, which has one central hall with two rooms upstairs and two rooms downstairs. This was the superintendent’s residence from the 1920s to 1993. Tyson is the primary inhabitant of the house and uses it as a gathering space, with supervisors occasionally lodging there.

Mount Sequoyah Center, Inc. is a registered independent 501(c)3 organization.  Serving the community since 1922, Mount Sequoyah is a multi-faceted community space with lodging, dining, event, meeting and recreation space for the community and visitors. It is a non-profit that welcomes other nonprofits, individuals and businesses to host programs, as well as producing its own educational programs such as summer camps, swimming, and tennis. Mount Sequoyah has offered history, services, space, and a serene environment for a variety of activities for close to a century on a mountaintop just minutes from downtown Fayetteville.

Lang Takes Over as General Manager for TAC...