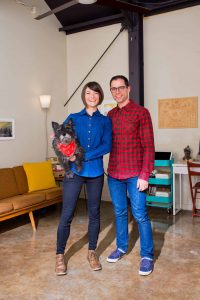 It’s said that two heads are better than one. That’s especially true in the case of Brooke and David Condolora.

The Condoloras are the two halves of Brain&Brain, a game development company nestled in the northwest corner of Arkansas. This husband-and-wife team is developing indie games, or “quiet adventures” as they call them.

Originally a Star Trek reference, the name Brain&Brain has come to stand for the teamwork necessary to create their games. Brooke calls David the “logical left half” of the brain, while she is the creative right side. She’s quick to admit, though, that there’s a lot of overlap between the two.

This brain-melding started when David moved from upstate New York to Searcy to attend Harding University, where he met Brooke an Arkansas native who grew up on a farm near Searcy.

After college, David and Brooke took off west for California, where both worked in creative industries. David became an assistant editor at Disney and Pixar, a job he credits for helping him absorb the renown storytelling processes that are used to create both studios’ films. Meanwhile, Brooke studied graphic design and became a freelance designer and web developer.

The Condoloras lived and worked in California for seven years, in both Los Angeles and San Francisco. During this time, they wanted to work on an artistic project together, but they never found one that hit the sweet spot of something that interested them both. “We tried a number of things, but they always leaned too far toward either film or graphic design instead of being something that interested us both,” David says.

The breakthrough idea to go into video game development came one day when David saw a screening of Indie Game: The Movie, which chronicles the development processes of three independent video games. Each of the three games –Braid, Fez and Super Meat Boy – were created by one developer or a team of two. Watching the documentary was a “Eureka” moment, and after the movie ended, David raced to his desk to send Brooke a message that they were going to make a game together. Brooke replied, “Okay!” and they started their new chapter.

“Games provided a perfect combination of her artistry and my technical background, and we’ve been making them ever since,” David says.

Deciding to become game developers meant they would have to “go rogue,” Brooke says. It was no longer feasible for them to live in one of the most expensive areas of the country, so they said goodbye to the life they had built over the years. They sold most of their belongings, and for 18 months, they were nomads, traveling from place to place, absorbing new experiences and cultures. This nomadic period, Brooke says, allowed the couple to travel to many of the places they were interested in and temporarily live there.

Once the pair was ready to settle down again, they decided to move to Northwest Arkansas. The move was a practical one, as the area was close to family and – crucially – more affordable than California.

“Northwest Arkansas checked most of the boxes: near family, affordable, good adventure potential,” Brooke says. “We expected to like it here, but we’ve come to love it.”

Brain&Brain’s first project was Doggins, a point-and-click adventure game inspired by the Condoloras’ cairn terrier. What started out as a quick two-week project morphed into a two-year marathon. Eventually, they released the game on iOS and showed it at the South by Southwest festival. Despite the long development time, both David and Brooke were eager to get back to the grind. That’s when they started developing what has become their best-known game, Burly Men at Sea.

Before they began developing Doggins, Brooke was already formulating the ideas that would lead to Burly Men at Sea. Inspired by Scandinavian folklore and illustration, the game puts the player in control of three bearded seamen as they sail out of their small fishing village to have adventures. Along the way, they encounter creatures from folklore and find the adventures for which they were searching. One play-through is brief – approximately 30 minutes – but the game has multiple branching storylines that reveal more secrets and adventures each time the player returns.

Burly Men at Sea, which took the Condoloras another two years to develop, was released in 2016 to critical acclaim. The game was released on multiple platforms, including iOS, Android, PC/Mac, PlayStation 4 and Nintendo Switch. TIME Magazine named it one of the top 10 games of 2016 and it received accolades from gaming and traditional publications, from The Guardian to Polygon to Paste Magazine.

With two games under their belts, David and Brooke are looking to their future. Brain&Brain has a number of projects in the works. Currently, the team is focusing on an interactive comic and a “sprawling Western adventure.”

Success hasn’t made them want to move back to the center of the video game industry. Economic factors have made living in Northwest Arkansas more business friendly for the couple as they work on their new projects. Lower costs of living allow them to stretch their income further than they would be able to in California. It’s a benefit that they know is increasingly rare in an industry that is often based in cost-prohibitive areas.

But the cost of living isn’t the only advantage that they’ve found in Arkansas. Ample business resources, from organizations such as Startup Junkie, have been critical for young companies, including Brain&Brain.

“Coming from California, Arkansas has been a welcome change in terms of business-friendliness. The costs and complication of starting and running a business here are far less, and there are a lot of resources available,” David says. “Great organizations like Startup Junkie and events like 1 Million Cups encourage the development of the tech community and promote camaraderie.”

“There’s an energy to this place that we hadn’t found elsewhere: like we’re part of something that’s just emerging. We’ve met some really talented artists and makers here, and it’s exciting to see the community continue to develop,” Brooke says.

While Arkansas isn’t a traditional hotbed for game creation, this husband-and-wife team has found the elements they need to fuel their endeavors. Along with the startup- and small business-friendly environment and the creative atmosphere, David and Brooke have the two things that energize their work – adventure and passion.

Adventure is easily found in the Ozarks with its mountains and abundant space, and the passion comes from like-minded creative people and designers in the area.

“One of the great things about creating games in a place not known for them is the level of excitement. People are doing it because they really love it,” David says. “We’ve found that, while the developer community here is small, it’s passionate, and invested in growing right here in Northwest Arkansas. We’re excited to be part of that and to see where it leads.”

History in the Making? Primaries Set Up Potentially...

Bringing it all Back Home: Lyon College and...