Locked in a re-election battle, Harrison native and Arkansas Supreme Court Associate Justice Courtney Goodson found herself the target of an ongoing negative campaign earlier this year, which tatted a steady drumbeat of allegations and half-truths. The smear was propagated by so-called dark money interests, bottomless-pocketed political organizations that are not required to disclose donors’ identities.

“I was not surprised to see dark money raise its head in the spring,” she says from her modest but tastefully appointed office in the shadow of the state Capitol. “I thought about not running. But then I thought about the example that sets for my three children and I thought, ‘No way. No way.’ Win, lose or draw, these people will know they’ve been in a scrape.”

Goodson may have seen her enemies coming, but even she was surprised at what they were packing in terms of resources. She claims about $2 million worth of ads aired in just 21 days by the conservative Judicial Crisis Network of Washington, D.C. In those ads, Goodson is savaged as lobbying for a pay raise and accepting thousands of dollars’ worth of gifts from trial lawyers, topped off by an Italian cruise worth some $50,000.

Accuracy in media groups have pointed out the skewed tactics of the ads. The pay increase, for instance, was requested by Chief Justice John Dan Kemp on behalf of the entire Court and many of the gifts came from her then-boyfriend, now husband, attorney John Goodson of Texarkana. She’s also stated publicly she would recuse herself from cases brought by certain attorneys that have presented such gifts to avoid conflicts of interest.

Still, the appearance has been damaging, and Goodson admits addressing the issue takes up considerable time and energy, bandwidth that would otherwise be used to tout accomplishments.

“As much as I can, I try to talk about the good work the Arkansas Supreme Court is doing,” she says. “I like to talk about our case clearance rate that’s never been higher than it is now; that we truly are a well-oiled machine and the objective numbers show it. The Administrative Office of Courts has all the stats to show that when I joined this court, there was a backlog, a big embarrassing backlog and not just me, but seven justices on this court have moved it in a great direction.”

RELATED: The Race for Governor

The negative ads, and the money, would be flowing still had she not successfully filed an injunction to get them off the air, a move resulting in a restraining order that’s currently under appeal. But, as attested by the old courtroom phrase, ‘You cannot un-ring a bell,’ the echoes of those ads still reverberate on the campaign trail.

“What’s top of mind for everyday Arkansans is they want to know, ‘What they’re saying about you, is that true?’” Goodson says. “No, it’s not true. They want you to believe I’ve taken gifts or money as bribes for favorable treatment in the courtroom, and that’s never happened. It’s never going to happen. People need to know. They need to hear it from me.”

More than just denying wrongdoing, Goodson is hoping her campaign helps to sound the alarm on the impact of dark money and smear tactics. Even after 10 years in a job that guarantees one’s unpopularity, she’s taken aback by the firepower such organizations bring to bear on the American political system.

“I know that it cannot be true that anyone has a constitutional right to lie,” she adds. “You cannot hide behind the Constitution and say, ‘I get to lie. I get to spend millions of dollars and say whatever I want to say about you. I’m not going to let the facts get in the way.’ That can’t be right.”

It is, in turns, exhausting and frustrating and not without its own brand of grim irony that she’s accused of profiting so substantially from an industry that didn’t welcome her in the first place.

“The legal profession is still a man’s world,” she says. “I quickly learned that they had not sent for me. They didn’t ask for me. I had presented myself probably too young, too female and too blonde to be a judge. ‘How dare you? Who do you think you are?’

“Judges, generally in Arkansas, don’t look like me,” Goodson adds. “They were a different generation, a different gender, and they did not embrace the fact that I was here. I didn’t get any advice or helpful hints or, ‘Here’s how to do it.’” 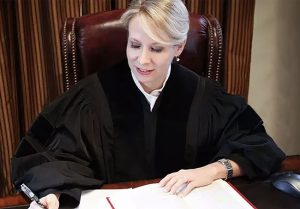 Goodson, who graduated from the University of Arkansas School of Law in 1997, says acceptance was won one colleague and one day’s work at a time. After clerking for Judge Frank Arney and Judge Terry Crabtree from 1997 to 2005, she was elected to the Arkansas Court of Appeals in 2008. She was elected to an eight-year term on the Arkansas Supreme Court in 2010, capturing 58 percent of the vote.

“What I learned was, really and truly who I am is good enough for me and for the people of Arkansas,” she says. “I’m a ninth generation Boone County resident. Although I wasn’t perfect and polished and from a political family, I found I was exactly what Arkansans wanted. I was their girl next door, because I truly was.”

Goodson says, however, that the political playing field has shifted dramatically over the past 10 years, a combination of massive spending and a 24-hour news cycle that puts individual candidates at the mercy of shadowy political action committees that operate with seeming impunity.

“When you have one speaker, dark money, who has endless funding to say whatever they want on any stage, in any venue, and you say, ‘Oh, they let a little regular person in Arkansas running for judge have the same opportunity.’ Well, there’s no possibility for that because this little person in Arkansas running for judge doesn’t have the same resources,” she says. “With that disparity, not just in a political race, but in a judicial race, this turns into a very dangerous situation.

“I have to raise money in a certain way, in a transparent way,” she adds. “I do that, I report every nickel over at Secretary of State’s office. I play by these rules of ethics in Arkansas but these large groups with big buckets of money funneling millions in here, they get to play by a different set of rules. There’s no transparency. They’re not filing anything over at the Secretary of State’s office. We don’t know who their donors are.”

Goodson’s view of the law was shaped early in life when, at age 6, she was adopted by her step-father. Her resultant view of the legal system as something serving the side of those who need it was a powerful image and ultimately led her to her life’s work. That little girl’s view remains undimmed, she says, and fuels the fight she’s willing to take on today.

“I still get to embrace and lean into that same system that was generous with me at six years old,” Goodson says. “Doesn’t necessarily mean I’ll get my way, doesn’t mean that I will always win, but it gives me a voice. I know I’ll be treated fairly and that’s what’s important, to be able to make my argument. I don’t feel like I’m jaded. I don’t feel like I’m bitter or mad. I feel like I’ve been given an incredible opportunity to reshape Arkansas judicial elections.

“Did I ask for this? No,” Goodson adds. “But there are times in life where you just find yourself in that place where you’re going to take the next step for everyone or you’re not. You can back up, fold up and go home or put your shoulders back and say, ‘We’re here to fight it out.’”

Cotton Calls for ‘Overwhelming Display of Force’ Against...

Little Rock is Under 8 p.m Curfew