Water in the Arkansas River is steadily rising, and officials are warning that the river will reach historic levels this week.

According to the National Weather Service, this week is expected to bring the “worst flooding in recorded history along the Arkansas River from Toad Suck and points northwest.” The NWS predicted on Sunday that levee-topping waters would be “possible if not likely.”

The Arkansas Democrat-Gazette reports that two flood levees were topped by rising waters on Tuesday morning. Waters crested over the McLean Levee near Paris and the Perry County Levee District No. 1 near Toad Suck, according to the paper. 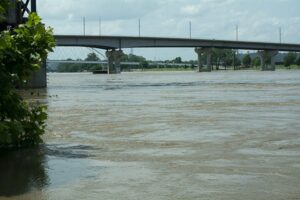 Both the Broadway Street Bridge (Midland Bridge) and the I-540 Bridge in Fort Smith were closed on Monday, with barricades constructed around the structures. On Tuesday morning, the Arkansas Department of Transportation announced the two bridges would be reopening.

While the majority of the flooding concerns are focused towards the northwest of the state and the River Valley, water levels have also risen in the capital city. Pulaski County officials closed the Big Dam Bridge and the Two Rivers Park and Bridge on Tuesday. The U.S. Army Corps of Engineers asked local officials to closed the bridges due to concerns about the rising surface water levels. 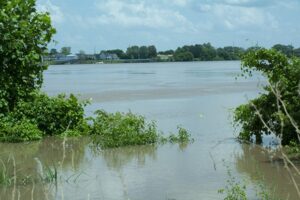 On Sunday, Gov. Asa Hutchinson announced that he had approved $100,000 in emergency funding to aid with support efforts due to flooding.

“This morning, the Arkansas National Guard, Arkansas Department of Emergency Management, and Arkansas State Police provided me with a detailed briefing about the state’s ongoing support efforts in communities experiencing record flood levels along the Arkansas River,” Hutchinson said in a statement. “I have received a number of requests for aid from communities, and I immediately approved the release of $100,000 of emergency funds to support sandbagging work.

The Innovator’s Field Guide: What Are They Saying...