The Future is Bright for Solar Power in Arkansas

Dr. Douglas Hutchings is the co-founder of Picasolar, a technology-driven solar company with roots in the University of Arkansas.

You might not immediately think of Arkansas as a trendsetting, trailblazing state in the field of solar energy. When it comes to solar energy use and jobs related to solar energy, Arkansas ranks well down the list in just about every category measured. But the successful merging of entrepreneurship and technology innovation is creating an energy around solar in Arkansas that also provides a blueprint for new economic growth in the state.

Picasolar and WattGlass are technology-driven solar companies with roots in the New Venture Development and Business Plan Project classes, a graduate-level program in the Sam M. Walton College of Business at the University of Arkansas. While both companies are still in their infancy and have several hurdles to overcome for long-term success, they represent the powerful opportunities available when we commercialize homegrown technology innovations.

Douglas Hutchings was working on his doctorate in microelectronics and photonics at the University of Arkansas when he enrolled in the program, led by Carol Reeves, associate vice provost for entrepreneurship, and he is now CEO and co-founder of Picasolar.

“Everything [Reeves] is doing in her program was absolutely the genesis of where we got started,” Hutchings says. “Without that, nothing else would have happened.”

Corey Thompson took a similar path in becoming CEO and co-founder of WattGlass.

Picasolar, which invented a process to increase the efficiency of silicon-based solar cells, won more than $317,000 in cash prizes in business plan competitions, in addition to building an invaluable network. It’s also one of the few companies to earn three rounds of support from the Department of Energy’s SunShot program. With around $1.2 million in capital raised, Picasolar is positioned to scale the technology and execute its business plan.

WattGlass invented coatings for glass that greatly improve the power and effectiveness of solar panels with an environmentally friendly process. Like Picasolar, WattGlass is a SunShot award winner. And, like Picasolar, WattGlass is located in the Arkansas Research and Technology Park (ARTP), giving this business incubation hub what very well could be the highest density of SunShot award winners on the planet.

These companies have the potential to create at least 50 manufacturing jobs with an annual salary exceeding $60,000 a year. And in many ways, their success would represent the culmination of the potential in our local business ecosystem — technology that comes out of universities, establishes a nexus of companies, researchers and technologies and then results in a new industry for the state and region. 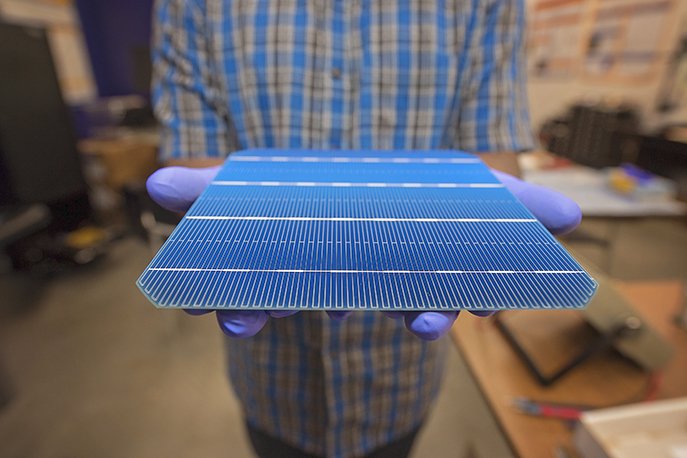 Picasolar invented a process to increase the efficiency of silicon-based solar cells, having won more than $317,000 in cash prizes in business plan competitions.

The success of these companies is far from a done deal, of course. The political environment has played a significant role in the opportunity to accelerate, and anything tightly tied to political fortunes rightly gives investors reason to proceed with caution and an abundance of due diligence. But solar remains a fast-growth industry. Employment in the industry dropped 3.8 percent in 2017, but that represents a leveling off after a 168 percent increase from 2010 to 2017.

The success of solar manufacturing in Arkansas would have a variety of ancillary benefits to the state. In addition to enhancing research at universities, it would create an abundance of educational opportunities. Solar power is beginning to impact how we think about architecture (aesthetic integration of solar), power electrics and storage (how we best connect to the grid) and even art. Solar installers are also the fastest growing jobs in the United States and having access to manufacturing would enhance training opportunities.

Access to best-in-class solar modules also could represent the final piece of tying new tech industry into our existing business pillars. Agriculture, transportation and retail are all big electric consumers and the electrification of transport will increase this further. Solar not only helps companies reach sustainability initiatives, it makes more and more financial sense. And many of the core competencies of Arkansas companies (supply chain and logistics, for instance) could play key roles in driving the operations success of solar-related companies.

Regardless of what the future holds for solar manufacturing in Arkansas, Picasolar and WattGlass have already helped establish the state as a leader in solar research and development. They have directly contributed to the establishment or expansion of several leading solar installers and to bringing more than 15 megawatts of modules to Arkansas (enough to power roughly 2,500 homes). And, importantly, at least nine UA graduates, who otherwise might have left the state, are instead investing their time and talents in Arkansas.

Solar is not a singular opportunity, but an example of something we can cultivate with the right policies, people and capital. The availability of federal funding for high-risk, high-reward technologies means we can do it with relative capital efficiency. The program run by Reeves is not expensive, pays huge dividends and could be ramped up. And businesses across Arkansas are eager to invest in each other in collaborative projects that lift our economic boat.

Something New Under the Sun

More solar fields are coming online in Arkansas, and Entergy is one of the companies working to make that happen.

The power company, which operates in Louisiana, Texas, Mississippi and Arkansas, has entered into multiple power purchase agreements that will bring more solar energy into its electric grid.

One is called the Chicot Project, a 100-megawatt solar field near Lake Village that would occupy 800 acres of land and generate enough power for 16,000 homes. Castleberry said Entergy is still waiting on approval from the Arkansas Public Service Commission, and once that is given, construction on the project will begin shortly after. A solar field can be constructed and operational in less than a year, according to Castleberry. 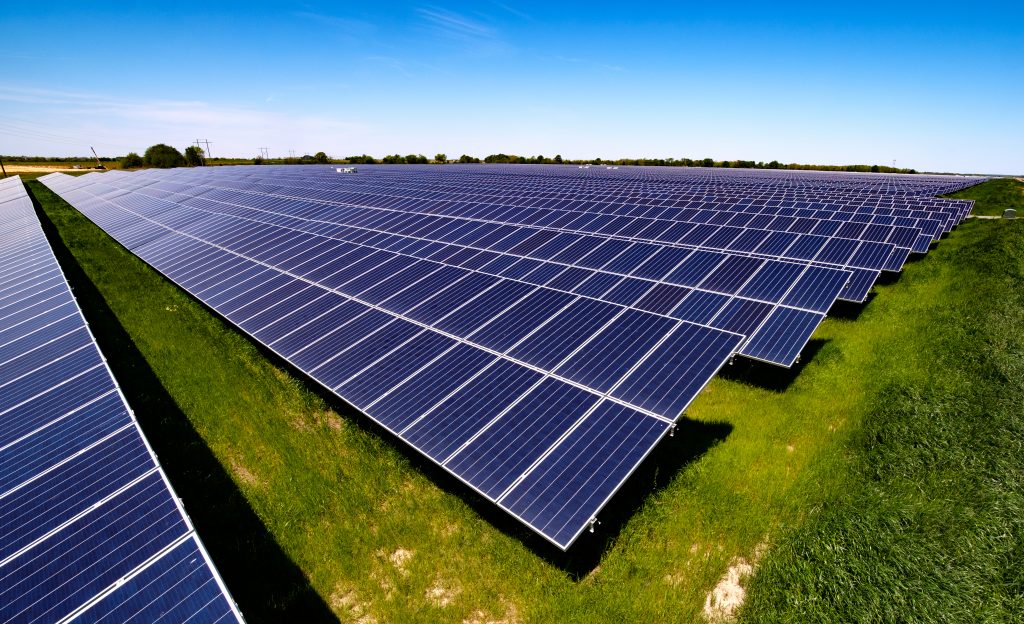 Entergy is bringing more solar power onto the grid with projects in each and south Arkansas. Photo courtesy of Entergy Arkansas.

“These go up really quick,” he says.

And that’s compared to three to four years of construction for a natural gas plant or even a decade for a nuclear plant, according to Castleberry.

The second project is an 81-megawatt solar field near Stuttgart.

If approved, NextEra Energy Resources will construct and operate the Chicot Project. The solar field near Stuttgart is also owned and operated by the same company. Entergy has signed a deal to purchase power from both solar fields for 20 years, Castleberry says.

Entergy is making these investments because the economics of renewable energy are getting better. Solar is a lower cost resource, and it’s emission free.

“Their fuel is sunshine,” he says.

Entergy has another emission free power option in the state with Arkansas Nuclear One, but its two units produce nearly 2,000 megawatts of power, compared to the nearly 200 megawatts that will be produced by the two solar fields in Stuttgart and Lake Village.

Another key difference? Arkansas Nuclear One produces power at all times of the day, whereas solar panels only do so when the sun is out. But Castleberry says batteries are getting more efficient and becoming more economic every year, which is a key advantage for the future of solar.

Customers support Entergy’s efforts to invest in green technology like solar panels, according to Castleberry. “We’ve seen a lot of good comments from customers,” he says.

Castleberry adds, Entergy is working on a green tariff that, if approved by the state, would allow customers direct access to get their power from the Stuttgart solar field or the Chicot Project.

Entergy would carve out a piece of those solar projects for any customer that wanted the option. If someone simply wants to make the leap to green technology and help the environment, the company works with customers that want that option, Castleberry says.

Solar energy isn’t just good for the environment. It’s become increasingly better for the bottom line, too. As the cost of implementation decreases, solar is growing in profitability for utilities across the country, including here in Arkansas, creating a market in which companies can thrive.

Little Rock-based Entegrity, a sustainability-minded energy service company that specializes in energy conservation, is capitalizing on the state’s expanding solar industry. Last month, the company acquired Richter Solar Energy, a solar energy firm out of Northwest Arkansas that specializes in the design and installation of solar electric systems.

Together, the company will continue to work with clients on large and small scales to expand and accelerate the deployment of renewable energy. Entegrity is working on solar projects on behalf of the Batesville School District, Arkansas Community Correction and the Arkansas Department of Corrections.

The company was also instrumental in the completion of the third largest commercial solar project in Arkansas at L’Oréal USA in North Little Rock. Scenic Hill Solar is led by former Arkansas Lieutenant Governor Bill Halter.

The Electric Cooperatives of Arkansas, too, are seizing on the opportunity to provide members with reliable energy at the lowest cost. AECC President and CEO Duane Highley saw the upward trend in profitability for solar, and brought it to his democratically elected board. 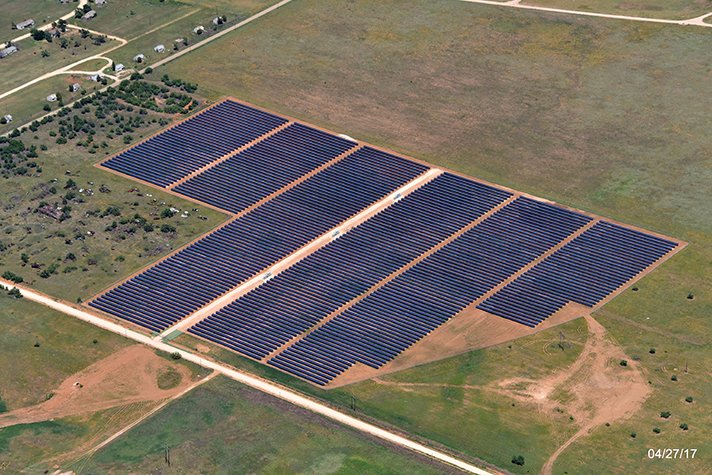 The solar project planned for Crossett will resemble one recently completed in Dawson County, Texas. Photo courtesy of the Electrical Cooperatives of Arkansas.

“Five years ago, we took a look at what was happening with solar and saw that solar prices had been falling six percent a year every year for the last 10 years,” says Highley. “We drew a line and said, ‘If you just project that forward within five years, solar is going to be as low cost as our power supply. And in fact, that happened within two years. We went to our board, and they agreed… to form a new subsidiary that would be focused on providing solar energy solutions for cooperatives. We call it Today’s Power.”

Through Today’s Power, the Electric Cooperatives of Arkansas are providing their cooperative members with utility-scale and commercial solar arrays in order to extract maximum value for their customers.

“Today’s Power, in its second year, was profitable,” says Highley. “This year, it will be profitable. Those profits will be returned to the members, again, helping to lower their energy bills.

“I think it’s the future,” he adds. “They’re developing utility scale solar farms for cooperatives to use as community solar projects and for members that just want to reduce their energy bills… We’re going to see more and more solar energy deployed.”

AECC recently announced a power purchase agreement with Renewable Energy Systems Americas Inc., to purchase up to 100 megawatts of energy to be produced by an 800-acre solar farm near Crossett by 2021.

“That’s going to provide the energy equivalent to 16,000 homes and at a price that’s lower than the cost of coal,” Highley says. “Who wouldn’t love that?”

From Our Editor: Summoning Our Better Angels

AFP Arkansas to Drop the Price of Gas...