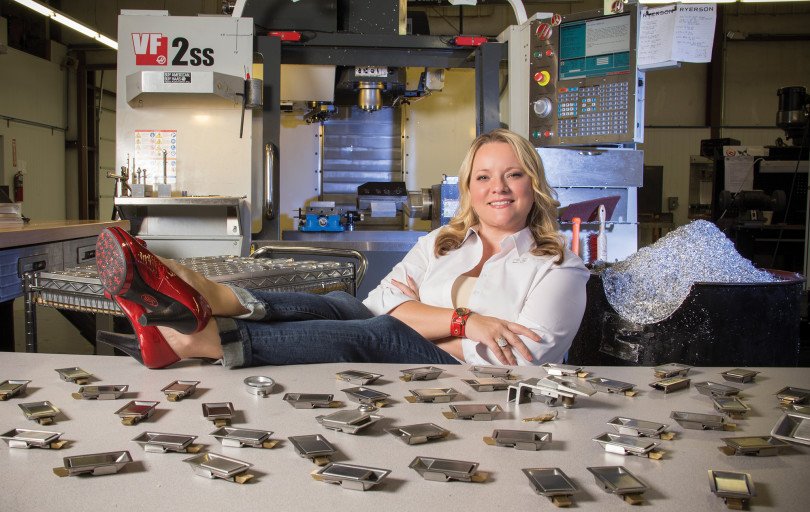 Galley Support Innovations CEO Gina Radke
is making a big impact in one of Arkansas’
top industries and top exports.

Back to main article

Gina Radke is a lot of things: co-owner and CEO of an aerospace manufacturing company in Sherwood; an international trade adviser for Congress; board member of Arkansas’ Career Education and Workforce Development Board; vice chair of the Arkansas Aerospace & Defense Alliance; board chair of Union Rescue Mission board of directors; recipient of multiple industry, business and charitable awards; native Arkansan; wife; mother; friend; and volunteer.

What she is not, however, is her husband’s bookkeeper.

“I know I’ve made it in this industry and business in general when I’m recognized as an executive,” Radke said. “When I introduce myself to people who aren’t in aerospace or manufacturing, generally, the first thing they ask is, ‘Oh, do you manage your husband’s books?’ The more I work and connect with people in these industries, the less I hear it, though. The fact I am a woman has no bearing, but my knowledge and experience do.”
Radke and her husband, Wade, own Galley Support Innovations, Inc., a designer and manufacturer of interior hardware for aircraft such as Gulfstream Aerospace, Dassault Falcon Jet Corp., Boeing Co., American Airlines, Jamco Aerospace Inc. and Showa Aircraft Industry Co. Ltd., among others. The Radkes were looking to start their own business in 2005 and considered launching a local franchise when the family business became available.

Wade’s grandfather started RD Manufacturing in the 1950s to build wing spares and bulkheads. In the 1960s, the company took on another project manufacturing latches for aircraft. Known as Geometrical Structures Inc. and operating in California, Gina and Wade bought the interior hardware product line in 2005, moving it to Arkansas and naming it Galley Support Innovations Inc. to maintain the GSI brand with existing customers and vendors.

“Wade and I both were new to aerospace,” Gina said. “I did political fundraising and was the district director for the American Heart Association in Florida. When we took over GSI 10 years ago, we made $10,000. When the economy crashed in 2008, Wade took another job and I took over as CEO. After GSI weathered that year, we were in a position for Wade to come back full time. I was president at that time, and Wade saw how we were growing because I had put in processes for quality control, operations and productions. The leadership of the company changed in that I became CEO and Wade became chief operating officer, taking on design.”

What makes Gina Radke’s role particularly significant in the aerospace and manufacturing industries is that 10 years after taking on GSI and seven years after becoming CEO, GSI is a $3 million business. Radke is one of five women to watch in international business, and she has a top secret security clearance through the United States government.

“This year in particular has seen a lot of growth for GSI and me,” Radke said. “In April, we announced our 8,300-square-foot expansion to the Sherwood facility; in May, we received the 2015 Governor’s Award for Excellence in Global Trade in the small manufacturer category; in June, we partnered with other aerospace and aviation industry entities, including the Arkansas World Trade Center, Northwest Arkansas Regional Airport, Bill and Hillary Clinton National Airport and Dassault Falcon Jet, among others, at the 2015 Paris Air Show, the world’s largest aviation and aerospace trade show; and in July, Gov. Hutchinson appointed me to the Career Education and Workforce Development Board, which replaced the State Board of Career Education at the Department of Career Education.

“I am also the vice chair of the Arkansas Aerospace & Defense Alliance, a group of public and private aerospace companies, government agencies and educational institutions dedicated to growing the aerospace, aviation and defense infrastructure in Arkansas and to training a qualified workforce.”

Developing a skilled and dedicated workforce is a part of GSI’s business philosophy. When the Radkes purchased GSI, three longtime employees moved from California to Arkansas to continue making latches. All three were felons.

“These three still work for us, and they are model employees,” Radke said. “They moved their families from California to Arkansas to stay with GSI. Their expertise helped us become the company we are today, and our faith in them helped them and their families flourish here. In fact, one has a child who works for us now. Wade and I believe in a holistic approach to business, which is to take care of customers, and they will come back; take care of employees, and they will produce a quality product; take care of vendors, and they will take care of you. It’s why we believe in the Union Rescue Mission so strongly. We have seen how an investment in people from treatment and other programs can be hired, trained and given a new opportunity for a productive lifestyle.”

“We purchased an additional 21,000 square feet adjacent to our facility in Sherwood, and we plan to hire an additional 20 employees,” she said. “We are considering opening an additional sales office as well as expanding into other products. As long as manufacturing is one of the state’s top industries and aerospace is Arkansas’ number one export, GSI will continue to make top-of-the-line fasteners for corporate aviation.”

And Radke will continue to leave her example as an executive, expert and community advocate for other female entrepreneurs to follow.

Read more about the women who play vital roles in Arkansas’ top industries.