It was the gentleman in the American flag clothing that first caught my eye as we exited the Havana airport and boarded the bus. Against all odds, I managed to see the stars and stripes before the flag of Cuba here in this land with which the United States formally renewed diplomatic relations only a few months ago. 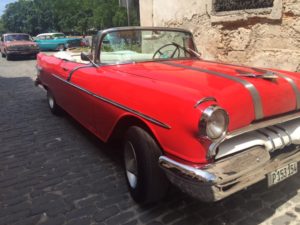 Not long ago, his clothing choice would have drawn suspicion. It is different now: freer, though still not yet free. A series of economic reforms began in Cuba in the spring of 2011, and though commerce is now by no means ubiquitous, restaurants, bars and privately owned taxis can be found throughout the changing city of Havana.

I was in Cuba along with a few other rice farmers and millers as a guest of Republican Congressman Rick Crawford of Arkansas’ first district, a district that produces more rice than any other congressional district in the country. The trip, led by Crawford and Congressman Ralph Abraham of Louisiana, was designed to explore potential trade opportunities and to work toward re-establishing trade through reasonable, incremental steps.

My grandfather started our rice farm here in Lonoke County soon after returning from World War II. In those days, Cuba was among the largest importers of American long grain rice. He was only 38 — three years older than I am now — when the Cuban embargo began, and he never again saw any significant amount of U.S. rice making its way back to the island before his death at age 90.

Today, Arkansas grows more than 50 percent of the rice in the U.S., most of which is the type the Cuban people consume at a rate of 177 pounds per person per year, a per capita consumption seven times that of the U.S. and the highest in the western hemisphere. Cuba imports nearly 600,000 tons of rice per year. None comes from Arkansas.

Crawford and others are trying to change that for rice and other exports through HR 3687, the Cuba Agricultural Exports Act, which would roll back decades-old restrictions that disallow access of U.S. agricultural products to Cuba through finance and marketing regulations. These restrictions keep a nearly $1 billion market, in close proximity to the U.S., out of reach of U.S. farmers and businesses, while serving it up on a silver platter to countries like Vietnam and Brazil, who would otherwise have a significant logistical disadvantage.

Some in Congress maintain an intractably negative attitude toward Cuban trade, an attitude rooted in Cold War arguments that began losing their validity a quarter century ago. Not only does this negative attitude continue to damage American agriculture and business — not to mention creating a vacuum of influence in Cuba, which other international players with less than noble intentions toward the U.S. might fill — but, it also perpetuates a pervasive excuse used by the government of Cuba for the failure of its own economic ideologies.

Still, recent shifts in U.S. policy, our group’s presence in Cuba and other signs of change suggest that progress toward economic freedom in Cuba seems to have come in spite of the embargo.

On the outskirts of Havana, out past the baseball field, is El Trigal, a large, open-air farmers market that would not seem so out of place in any-town America except, perhaps, for the classic ’50s era trucks on which the produce is hauled from the farms. Here, restaurateurs and farmers bargain for prices, engaging in a type of commerce previously foreign to the Cuban economy. It is an experiment, but one that seems to be working quite well. The energy in the air confirms quite clearly what my broken Spanish can only approximate through my conversations with the farmers.

Back downtown, at Fabrica de Arte Cubano, an establishment that is part club, part art museum, young people listen to hip-hop, watch avant-garde short films and browse art that exhibits a level of freedom of expression that I did not expect to encounter here. Later in the evening, these young people will line the seawall for miles along the edge of Havana harbor, the breeze off the Caribbean cooling them as they look out through the darkness, northward, toward America.

Though my three days in Cuba provide admittedly limited experience, it is hard to ignore the signs of movement in what I see as the right direction, but real challenges remain. There are still legitimate concerns regarding human rights, and anyone wishing to paint a more pessimistic view of Cuba than mine would not be without material from which to draw. Press freedoms are still lacking, and propaganda still covers billboards throughout the city.

A portrait of a young, stern-faced Fidel in military fatigues looks out across the roadway on the outskirts of Havana. The accompanying text reads “Socialismo o Muerte”— Socialism or Death.

But one would do well to note that the sign is rusted; the paint, fading.

It is neither of those portraits that I will remember about the island.

What I will remember is the boy who sat next to his dad, both with guarded smiles as they sold their produce in the market, tasting the first fruits of opportunity afforded by the open market experiment in economic freedoms.

To my eyes, an open look at contemporary Cuba provides evidence that the philosophical and political debates regarding the virtues of free market economic systems has been won. What remains are arguments of degree and detail.

Cuba is moving — if only ever so slightly — toward new freedoms. To continue the embargo and to refuse to engage and foster these new freedoms through trade would make us not only hypocritical, but also poor sports.

Mark Isbell is a fourth-generation rice farmer from central Arkansas. He is also a writer and instructor, who has written for several publications and teaches as an adjunct at the University of Arkansas at Little Rock.

Improving the Lives of Employees with Diabetes