Ashton and Austin Samuelson of Conway had no restaurant experience seven years ago when they set out to open Pitza 42, but they knew a fair amount about hunger.

Pitza 42 was the predecessor of Tacos 4 Life. The couple is set to open their seventh Tacos 4 Life location – in Jonesboro in November. Two more will open in quick succession after that in Frisco, Texas, and Charlotte, N.C., marking the company’s first out-of-state expansion.

The company donates an average of 6,500 meals per day, with 22 cents per meal sold going toward the Feed My Starving Children mission.

“We have provided over 3.5 million meals,” says Austin Samuelson. “Every store we open adds a minimum of 1,000 more meals a day being raised, so when we open the Jonesboro location we will go from 6,500 to 7,500, at least, right away.” 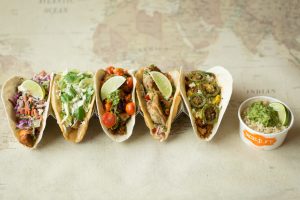 The inspiration for a hunger mission-based business came to the couple while they were living in Los Angeles. Ashton was teaching in a private school and Austin was working in real estate. They began learning about hunger, and started volunteering with Union Rescue Mission in Los Angeles.

“We couldn’t escape the fact that at that time 18,000 children were dying every day from starvation and malnutrition around the world,” says Samuelson. “We really wrestled with that. We didn’t know what to do with it for well over a year and finally one day God just gave us this idea.”

They were inspired by the model and mission of Tom’s Shoes, which donates a portion of its sales to support people in need, and set out to do something similar with food.

“We were both naïve enough to say, you know, ‘How hard could that be?’” says Samuelson. “That’s what led us to Pitza 4 2. Every pizza we sold fed a child. It was a very simple concept and it was a really good learning ground for us. That led to tacos and after a few months of opening the first location, learned quickly that reception was exceptionally greater.” 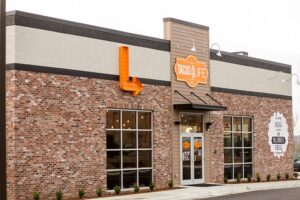 The first Tacos 4 Life location in Conway opened in 2014.

“People love tacos, it seems,” he says. “That was really exciting and also we basically doubled our meal count because we donated for every taco we sold.”

Samuelson is awed by the number of meals the company has been able to supply, but defers the credit for doing so.

“It’s really the guests who come in,” he says. “We have the most amazing, most faithful guests that eat with us at a very high frequency and are very passionate about the brand, and they’re the ones to be thanked for 3.5 million meals being raised.”

“Our mission is to create unique, made from scratch tacos that get people excited about changing the world. We want to give our guests an amazing dining experience – and they in turn are helping end childhood hunger every time they order a meal.”

The State of Arkansas: Politics

Donors Erase Over $35M in Medical Debt for...

We love Tacos 4 Life! Great food and feels good to know we are helping them give to those in need.

Love this brand and all the people involved!

Good people. An asset to Conway!