In July, Arkansas Money and Politics showed how robots were being used in the operating room, but there are so many other industries and organizations across The Natural State making use of these new technologies.

One of those areas is retail. And the country’s largest retailer, Walmart, is looking at the big picture for robots that’ll be helpful to both customers and employees, according to Ragan Dickens, director of corporate communications.

In 50 of its stores, Walmart has begun testing a scanning machine from Bossa Nova Robotics, according to Dickens. It travels down aisles and scans for out-of-stock products. Dickens says it can do in 90 minutes what it would normally take an associate much longer to do on their own.

“It’s basically going through scanning the shelves, determining if there’s something out of stock,” he explains.

The scanners also detect when a product is out of place and may even be under the wrong price tag, according to the communications director.

“It’s really helping the associate be able to take that data in real time, sending a photo to an associate’s hand-held device and showing them where outs and holes are,” Dickens says. “They can immediately go to those aisles and fix shelves.”

It’s helping to provide associates with more time for interacting with customers.

Dickens says another 50 stores are working with a machine that quickly unloads trucks.

With its conveyor system, the fast unloader can move into the back of a truck and unload 20 cases per minute and the entire truck in under two hours, according to Dickens. Products are then moved into side carts so associates can take them where they need to go.

It used to take about eight associates to unload a truck, and that number has now been cut in half, Dickens says.

“Associates have been really pleased with it,” he notes. 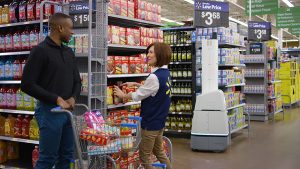 Walmart is one of many Arkansas businesses using robots to aid employees and customers.

While Walmart has its headquarters in Bentonville and offices in places like San Francisco, Dickens says the robotic design work is a mixture of its labs working with third-party vendors.

Dickens says Walmart has been pleased working with Bossa Nova. “It’s a great product we’ve been really happy with. They’ve been fantastic to work with through the process.”

The idea of robotic automation for Walmart is to make everything faster and more convenient for customers and associates. The end result, says Dickens, is that customers have more access to greater products.

Walmart’s not the only company looking to use advanced robotics in Arkansas. Chinese T-shirt company, Tianyuan Garments Co., has set up shop in The Natural State with “sewbots.”

The $20 million factory in Central Arkansas will produce nearly 23 million T-shirts per year made by about 330 robots.

In law enforcement, too, robots are being used to make life easier and officers keep safe.

“They kind of give us an idea of what’s going on so we don’t have to send people in there right off the bat,” he says.

Moore describes the robot as being about the size of a dog.

According to Moore, most officers view the robots as tools that can save lives.

“We know that’s where things are heading, so it can be a good tool,” he says.

One of the larger factors that determine if the department gets access to these new tools? Funding.

And perhaps one of the largest areas robots are having an impact on in Arkansas is education. With Gov. Asa Hutchinson pushing for more coding in high schools, the effort goes hand in hand with expanding robotics programs.

Cannon Reeves attended Riverview High School and got into robotics in the ninth grade. He transferred to Arkansas School for Mathematics, Sciences and the Arts in Hot Springs two years later. “I did all of the robotic competitions Arkansas had to offer,” he recalls.

While in college, Reeves has done private sector work, and he started his own robotics company in March.

“It’s been in all aspects of my career and education,” he says. “More and more schools are adopting robotics programs.”

And it doesn’t matter if that’s in classrooms or after school programs. Robotics is spreading to more and more schools. Robotics can expose kids to several different sides of STEM (Science, Technology, Engineering and Math) that they might not be able to get in the classroom, like mechanical engineering, computer science and electrical engineering, says Reeves. Students also learn collaborative skills when studying robotics.

Some children show such an incredible display of inspiration the first time they see a robot turn on and come to life, says Reeves. And schools around the state are seeing an increased demand for these programs. “I think it’s really exploding. When we talk to schools, they really want it.”

And when students help build their first robot, they learn they are capable of making something that may have seemed out of their grasp. Students learn they’re capable of a lot more than they originally thought, and it puts them on a path of learning, according to Reeves.

Robotics education helps the state by producing more tech talent — something Arkansas needs, says Reeves. The Natural State has thousands of coding jobs available, he says. Business leaders see the need for these skills in Arkansas.

“We, as a state and region, need more tech talent to grow,” he asserts.

According to Reeves, automation costs about the same in Arkansas as it does anywhere else in the world. In other places where human labor is cheaper, like China, automation is a way for Arkansas to compete and bring jobs back.

Reeves wants Arkansans to know robots are here to help. And children need the option to learn about them.

“By giving kids the option to explore it, you’re in a sense future-proofing them.”

For every job taken by a robot or machine, one is created, according to Reeves. Robots need humans to program them and collaborate with them on certain tasks.

“Our jobs aren’t going away. They’re just being improved,” he says.

With technology improving in the coming years, robots are likely to have a strong impact on different jobs, companies and organizations across Arkansas.

State of the Road – The past, present and future of Arkansas Highways