Beginning with the 2015-16 school year, Arkansas’ public high schools are required to offer at least one computer science course, but are there enough educators to go around?

Top photo: Anthony Owen, The Arkansas Department of Education’s new coordinator of computer science is working to carry out the governor’s coding initiative.


When school started this fall, every Arkansas public or charter high school student had a shot at an introduction to computer science, courtesy of Gov. Asa Hutchinson’s initiative and thanks to some innovative public schools and a couple of virtual education providers.

While Hutchinson’s election campaign initiative aimed to make computer science courses available to these high school students within the next four years, Act 187 of 2015 mandated that each public high school — traditional or charter — must offer at least one beginning with the 2015-16 school year.

“I am excited,” said Anthony Owen, who assumed the newly created position of coordinator of computer science at the Arkansas Department of Education on July 1. “I actually received some applause from the field the other day — a superintendent had told me that this was the fastest that they had ever seen ADE move on anything. It’s good to hear that type of accolade coming from the field.”

Hutchinson has long contended that learning computer programming skills will prepare students for the future and create a better workforce for Arkansas, and his supporters agreed that there was no time to waste.

Because the initiative was fast-tracked, this first year many schools will depend on online classes for one or more of the Education Department-approved computer science courses: Computer Science and Mathematics and Essentials of Computer Programming classes, in addition to College Board Advanced Placement Computer Science and International Baccalaureate Computer Science.

Suzanne Mitchell, director of the Arkansas STEM Coalition and a member of the governor-appointed, 15-member Computer Science Task Force, said about 20-25 teachers were certified to teach computer science last year. The state would need about 250 to accommodate the mandate, she said.

Just before school started, 1,300 students were set up to learn remotely through Virtual Arkansas, an Education Department and Arkansas Education Service Cooperatives partnership providing digital courses, and another 300 reserved spots with the Arkansas School for Mathematics, Sciences and the Arts, but final numbers won’t be available until after districts submit enrollment reports in October.

There is no charge to the districts for joining the ASMSA program, and the fees for Virtual Arkansas — a $2,500 consortium fee per district plus $25 per student — have been waived for schools only signing up for computer classes this year.

“We think that we’re going to see a tremendous enrollment increase when school starts,” Swan said. “We’ll just handle it. We have a list of adjuncts that we can reach out to, so we are sitting on go, waiting to pull in our resources. We won’t turn anyone down.”

Modules for the first four weeks of classes are complete, and online course designers are busy constructing the rest of the first nine weeks now. That work got underway in early April 2015, after details about course approval, standards and frameworks emerged, and Swan’s team began researching curriculum resources.

“We’re using a little bit of everything,” she said. “There’s no sense recreating something that’s already out there, but we didn’t put all of our eggs in one basket. We looked at Code.org, we looked at CodeHS, we looked at Khan Academy, CompuScholar — there are just so many resources out there.”

Districts linking into online classes must provide a facilitator — someone to be in the classroom supervising students — but teachers will be able to interact with students and answer questions, even sharing a computer screen when needed.

“If I’m a teacher for Virtual Arkansas, I may see up to 200 to 250 students a week,” Swan said, as her image popped up on a laptop screen in a demonstration of how students enrolled in Virtual Arkansas classes will see their teachers when school starts. “I just pop in — we have a regular time where the teacher can talk to students about certain topics.”

“We try not to do the hardware because we want to move away from that and look at how we train teachers for computer science and computer coding to move away from the virtual options and have a teacher in the classroom,” said J.R. Davis, spokesman for Gov. Hutchinson, adding that $5 million was appropriated for the initiative. 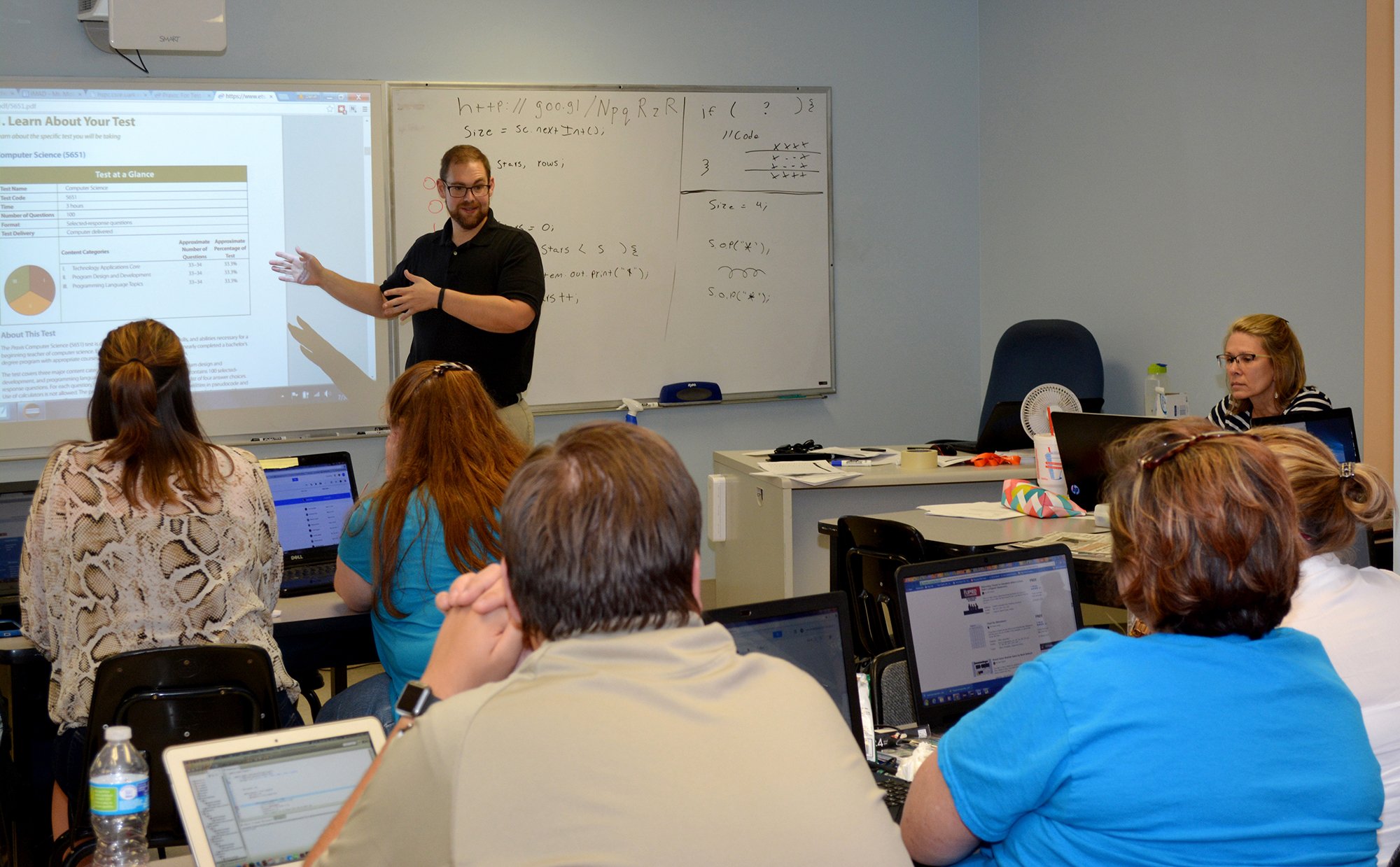 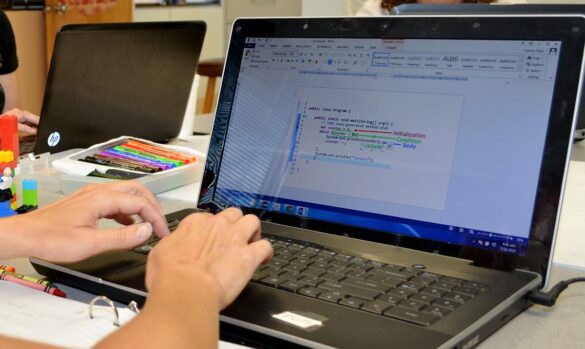 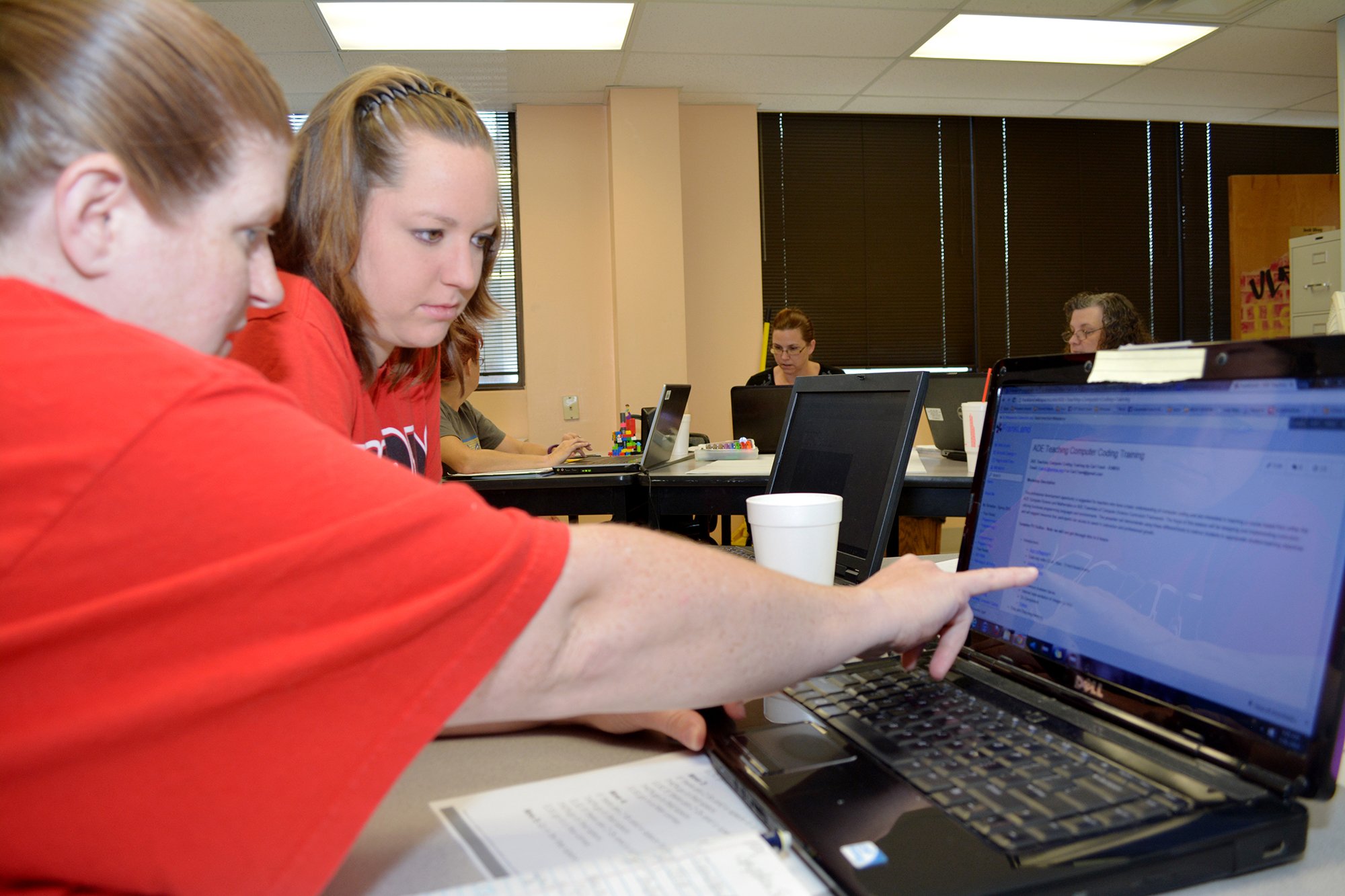 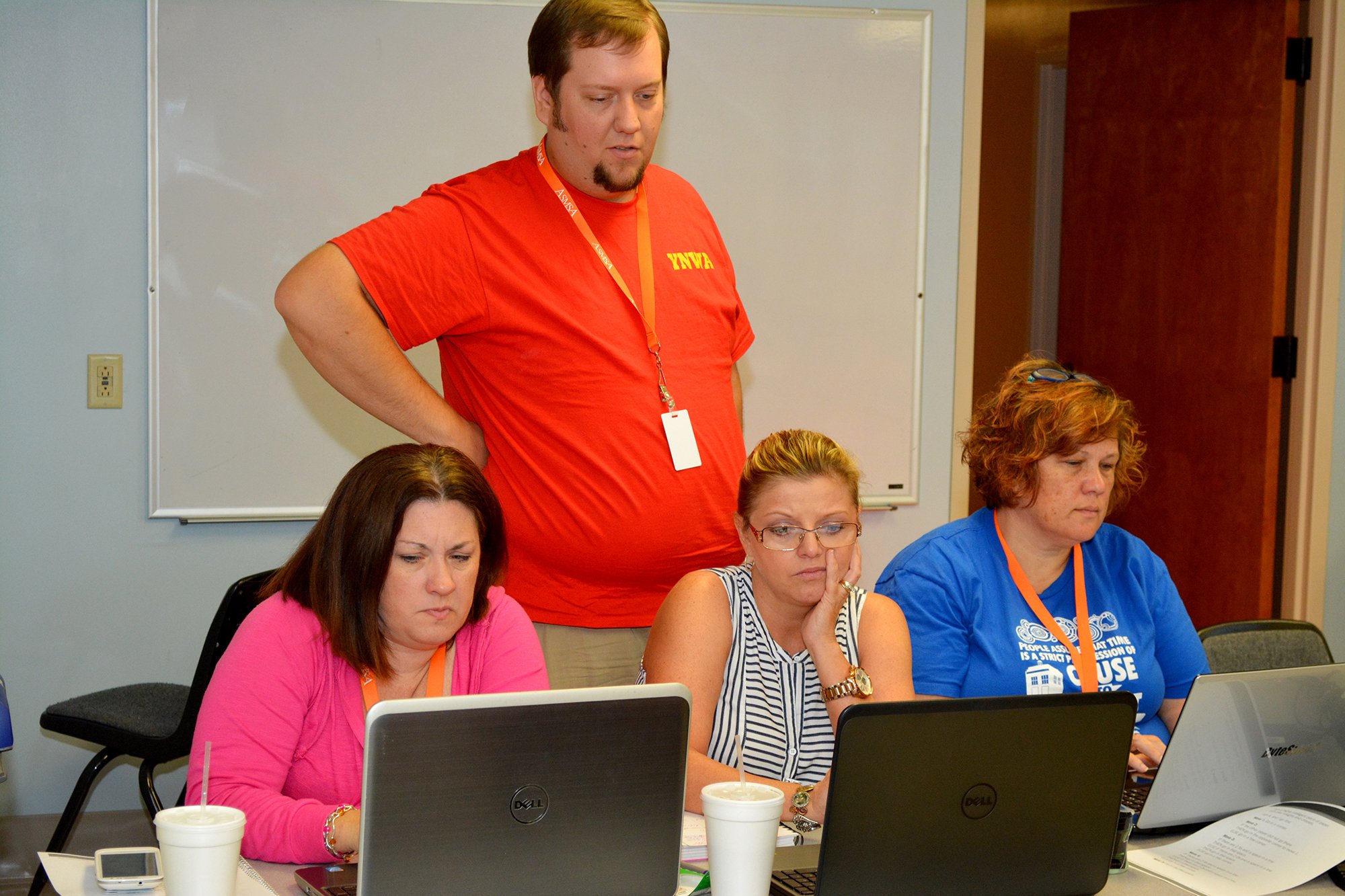 Emerson High School Principal Jim Deloach said, however, that hiring a full-time, certified computer science teacher might not make sense for everyone.

The Emerson-Taylor-Bradley School District in Lafayette County already pays the Virtual Arkansas consortium fee because it offers other virtual courses, so it is less expensive to pay per student than to pay another teacher’s salary.

This summer, more than 130 teachers participated in professional development opportunities around the state for teachers to learn more about teaching science, technology, engineering and math, Hutchinson said during an Aug. 11 news conference devoted to the computer science initiative.

ASMSA conducted a free, weeklong boot camp in July for 16 computer science teachers from around the state.

“It’s not just a weeklong professional development [course] where teachers come and get their stuff, and then they go back and they have a year to figure it out,” said Daniel Moix, ASMSA computer science education specialist. “My full-time job is to support computer science teachers in Arkansas. I will be mentoring these teachers in their classrooms, online, helping provide them with instruction some days of the week, helping provide them the support to do face-to-face instruction the other days of the week. They’re basically getting training wheels for 12 months while they get on their feet, with the goal being the following year for them to be able to teach that course independently.”

Though one law requires that districts offer computer science, another — Act 853 of 2015 — specifies that they won’t be in violation of state standards of accreditation if no students sign up.

“I don’t even know that all districts have had this conversation with the parents or students because the students are gone for summer, and they won’t know anything until they walk back in the door,” Moix said. “If the district puts it in the course catalog and then the kids never see the course catalog, they’ve met the letter of the law, they’ve just not met the color of the law because the governor wants kids to walk in and to be excited and to be engaged.”

Gov. Hutchinson toured 10 schools in May to get the word out about the initiative. Arkadelphia High School is one of the sites he visited.

“We have been in the planning stages for three years to put in a programming class,” said Arkadelphia High School Principal David Maxwell. Four years ago, that school converted to a project-based model, encouraging students to approach and solve problems through math, science and technology. Some of their accomplishments include solving manufacturing problems for a local corporation, and creating, manufacturing and selling products. One group took second in the state in a CyberPatriot, or National Youth Cyber Education Program, competition.

“These kids have to code at some point in time — they might not have to create a specific code, but they have to understand code in order to tweak it,” Maxwell said.

Arkadelphia is offering AP Computer Science this fall, taught by a staff teacher, and had eight students signed up.

“Everyone else was kind of scared of it — these guys were comfortable with it,” he said. “I think we’ll see it grow. It’s something new, and, anytime you start something new, it has it’s growing pains and you have to see and tweak.”

Planning For The Future

Andy Mayes, Bentonville High School computer science teacher and president of the Arkansas Society for Technology in Education, also serves on the Computer Science Task Force. Mayes is certified to teach business and is working toward a computer science certification, meaning he just needs to pass that subject’s Praxis exam.

The task force recommended that the Education Department re-evaluate the Praxis Computer Science exam cut score and look at modifying the exam. In the meantime, the department has made an exception allowing teachers with business licenses to teach Essentials of Computer Science this year.

“I think the reason for that is that it was a test that already existed for another state — Texas — for their own programs that don’t match ours identically, so it covers content areas that are not necessarily needed or compatible with the structure of the computer science courses that ADE is offering,” Mayes said.

Mayes will teach a course called Ignite, a combination of Essentials of Computer Programming and a career and technical education course that allows for an internship.

“The nice thing about the Essentials framework is that it is open enough that you can teach any different language and satisfy those objectives,” he said. “That allows us to tailor the instruction that students receive to their areas of interest, to their strengths and the opportunities that our business partners are offering for them to participate in internships and work on real-world projects.”

Mitchell of the STEM Coalition said there is work ahead to incorporate computer science education at the elementary and middle school levels so courses can build upon one another. Teachers, of course, will need to be better prepared coming out of college to handle these new demands.

“We’ll just keep training teachers, but we have to start that in college in the pre-service program when our college students are coming up in freshman through senior year — that’s where we have to put one or two computer science courses for teachers so they understand what they need to know and teach,” Mitchell said. “You can’t wait until they’re already out there like we are now and zap them with a workshop for five days — that’s not enough. It’s not even a Band-Aid. It takes a full course — like a course in college, with homework, with accountability. You’ve got to learn it right to be able to teach it right. We’ll struggle the first couple of years to find enough teachers.”

Regardless, she sees this initiative as a step in the right direction.

“It gives students an opportunity to gain a computer science skill for whatever career choice they want to pursue and also just to be good citizens,” she said.

“All students need to have some computer science background — for finances, understanding their retirement plans, understanding any kind of job-related technology that they move into, health-related issues — everything just seems to depend on that computer. So, in computer science, they’ll have not only coding that some students really like because it’s very meticulous but also just general computer literacy, computer science ethics, things to do with the different types of hardware and how it is all interconnected.”

Technology: A Campus in the Cloud

Arkansans Win Big Across the State with Scholarship...

For Business or Pleasure, Steak is Back, Baby