Arkansas farmers are facing an uncertain future as the catastrophic effects of massive rainfall and flooding compounded with the impact of trade disputes with China. Agricultural experts are labeling the situation “a perfect storm” and anticipate reduced yields, low commodity prices and depressed markets, a serious blow to the state’s largest industry.

“It’s certainly been a difficult year for a lot of our agriculture industry, and that’s across the board, ranging from our livestock and poultry industry as well as our row crop industry,” says state Secretary of Agriculture Wesley Ward.

When farmers sought operating loans at the beginning of 2019, many had to restructure their debt because they couldn’t pay off their loans from 2018, McGilton says.

Precipitation totals have been above average all year, with May being especially wet. In some areas, rainfall totals exceeded the normal amount by more than 10 inches, according to the National Weather Service. This led to record flooding along the Arkansas River, which breached levees and rapidly flooded towns and fields from one side of the state to the other.

River flooding devastated fields in the River Valley in particular; the region is unlikely to produce any corn or rice, and 72,000 acres of hay were underwater, says Vic Ford, the interim associate director for agriculture and natural resources at the University of Arkansas Division of Agriculture Cooperative Extension Service.

Mitigating flood damage and rehabilitating fields will incur huge expenses on top of the already reduced yields because of delayed or destroyed crops, Ford says.

“You have to spend money, and it’s costing you, but the chances of making that up in the near term … it’s just going to be difficult,” Ford says. “The farmers in the River Valley are in survival mode.”

Some farmers with insurance may choose to take advantage of prevented planting provisions in their insurance policies. Prevented planting refers to “a failure to plant an insured crop with the proper equipment by the final planting date,” according to the United States Department of Agriculture. If farmers utilize prevented planting insurance on affected fields, they cannot plant in those fields this year, and insurance payouts provide only a percentage of the projected revenue from the failed crops.

Other farmers who lost their crops to weather may try their luck planting soybeans, because they can be planted later in the year than other crops. Unfortunately, the soybean market is up in the air because of ongoing trade disputes with China. 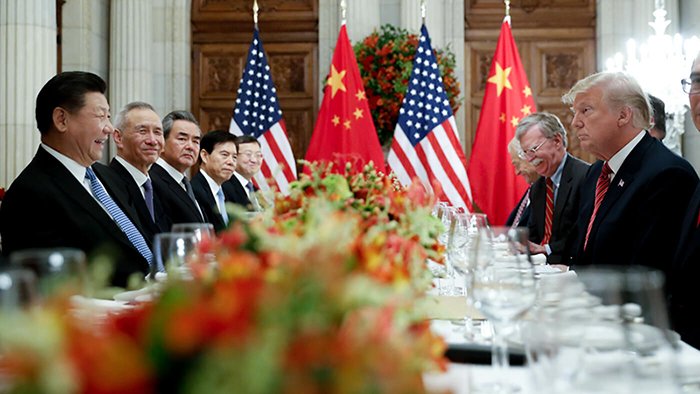 Last month, Chinese officials announced that the country would no longer purchase soybeans from the United States. China is the world’s largest soybean buyer.

The United States and China have been embroiled in a series of retaliatory tariffs since 2018 when President Donald Trump announced controversial tariffs on steel and aluminum, because he has said the United States’ $621 billion trade deficit with China is unfair.

As the tariffs have multiplied, with each country imposing import taxes on a large number of products, many industries have suffered from decreased export demand – agriculture is at the top of that list, with commodity prices trending downward for the fifth year in a row, McGilton says

In December, Trump and Chinese President Xi Jinping called a truce and seemed to be working on new trade agreements until May, when Trump increased tariffs on $200 billion worth of goods imported from China. If an agreement is not reached soon, he has threatened further import taxes.

Last month, Chinese officials announced that the country would no longer purchase soybeans from the United States. China is the world’s largest soybean buyer, and, typically, one out of every three rows of soybeans on Arkansas farms has been bound for the Chinese market, McGilton says.

“When you lose roughly a third of your demand, that’s going to increase the supply, and it’s also going to put pressure on prices,” he says.

Grain elevators are paying less for soybeans in particular, because they are running out of room to store them and may not be able to sell them if the trade war isn’t resolved soon, says Andrew Grobmyer, executive vice president of the Agricultural Council of Arkansas.

“We have a glut now,” Ford says. “We went from roughly $9 a bushel soybeans to $7 a bushel soybeans. So if you’re getting less on a per-bushel basis, and those profit margins are not very wide, you go from making money to losing money.”

While soybeans are the biggest problem, other crops are affected by the trade war, too.

“There are grain bins throughout Arkansas that have grain that has not been spoken for,” Grobmyer says. “Normally those grain bins begin to empty about this time of year in preparation of harvest, and that hasn’t happened over the last couple of years because the market hasn’t been there.”

The federal government has announced an economic relief program to mitigate the effects of the trade war. The USDA’s three-pronged plan includes $14.5 billion in direct payments to producers of trade-damaged products, a $1.4 billion food purchasing program that will distribute would-be exports to food banks and schools and a $100 million trade promotion program designed to develop new export markets. Details have yet to be released on exactly how the direct payments will be distributed among counties across America, according to the USDA.

While these programs indicate that the federal government is aware of what farmers are facing, they don’t solve the whole problem, Ward says

“Each time they come up with more supplemental assistance, whether it’s for trade dispute matters or whether it’s for disaster assistance … for many, it’s not enough to make people whole,” Grobmyer says “They’re still having bad years, running in the red. Most people can only do that for so long before they have to make some very tough decisions with what to do about their operations … There’s a sense that people are looking more closely at just finding a way out of farming altogether.”

For now, farmers are just focused on making ends meet. The reduced yields, increased costs, trade and market fluctuations and carryover debt have led to an incredibly stressful year that’s just past its half-way point.

There are still many factors up in the air, and the total negative impact of this disastrous set of circumstances can’t be calculated until the trade war stabilizes, and the harvest is complete.

It could be that yields will be so reduced by the weather issues that they will balance out the oversupply created by the China trade disputes and prices will normalize. Or, if many farmers choose to plant soybeans in lieu of utilizing their preventive planting insurance, the oversupply could get even worse, Ward says

Experts hope that the China trade agreement is worked out before the harvest and that the bad weather comes to an end.

Bottoming Out: Arkansas’ Oil And Natural Gas Production On The Decline

Home Team? It Would Be a Crying Shame...

The Last Word: It Was a Good Day

The Digs of the Deal: Gillett’s Coon Supper...

Shelter from the Storm: COVID Continues to Shape...