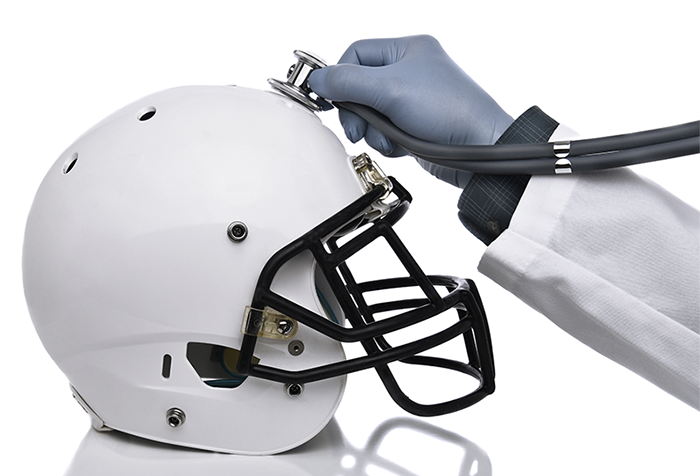 When talking about sports medicine, broken bones, sprained joints and ligament damage — the realm of orthopedists — have dominated the conversation, but a silent epidemic has lurked behind the scenes for decades. Only recently, with the high-profile cases of former athletes developing behavioral changes including aggression, depression, dementia and even suicide, has the danger of concussions and resulting brain damage — in the sphere of neurologists — risen to the forefront.

A concussion is a traumatic brain injury from a blow to the head that results in the brain crashing rapidly into the inner wall of the skull, says Lawrence O’Malley, M.D., a sports medicine specialist at the University of Arkansas for Medical Sciences (UAMS).

The Centers for Disease Control and Prevention estimates that as many as 3.9 million sports- and recreation-related concussions occur in the United States each year.
“You usually see them in contact sports, like football, but you can also see them in soccer, or anytime somebody’s head collides with another object,” O’Malley says. “That can include another player’s head, body part, some sort of sports equipment or even the ground.” 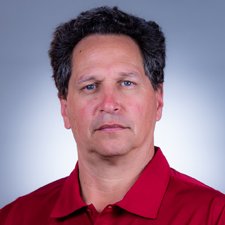 “About 80 to 90 percent of the people that get concussed are recovered in around 10 to 14 days, but if an athlete returns to action before their concussion is healed, they are more susceptible to get another one at a less impact.” – Dave Polanski

For decades, especially in football, big hits were lauded and players who “had their bell rung” were encouraged to shake it off and get back in the game. Players were expected to help their team win and didn’t want to let their teammates down or jeopardize their job security and, for professionals and elite collegians, potential multimillion dollar income. If they had a head injury, they didn’t report it to team officials and tried to carry on as normal. But as the severity of multiple concussions took its toll on some of America’s favorite athletes, dealing with head injuries has become a central issue across all spectrums of athletics from the little to major leagues.

“For years we didn’t pay attention to it like we should have,” O’Malley says. “We’re actively looking for it now, and everybody understands the risk. It’s a lot easier to make that diagnosis and for a player to say, look, I don’t want to end up with a traumatic brain injury that doesn’t go away from all of these multiple hits to my head. It’s not worth that amount of money.”

Concussion symptoms may include headaches, neck pain, problems falling or staying asleep, mood swings and sensitivity to light, noise and motion that can last up to two weeks, says Dave Polanski, head athletic trainer for the University of Arkansas football team.

“About 80 to 90 percent of the people that get concussed are recovered in around 10 to 14 days, but if an athlete returns to action before their concussion is healed, they are more susceptible to get another one at a less impact,” Polanski says. “Typically, the problem will last longer the second time than it did the first time because they weren’t really recovered that first time. Now we’re saying, look, it’s better to be out an extra couple of days here than it is to go back and get another concussion and miss two weeks or three weeks.”

O’Malley says concussion science is a young field and experts are still trying to understand the impact multiple brain injuries can have on an individual.

“The symptoms have to be completely resolved before we can even start reintroducing them back into their sports or activities.” – Lawrence O’Malley M.D.

“We don’t understand why one kid gets chronic concussions with the same type of injury that another kid essentially has no concussion,” he says. “They’ve put force monitors in football helmets to try to see if a certain hit or force equates to a concussion, and we haven’t been able to correlate that yet. And that’s why we see the change really trying to reduce helmet-to-helmet collisions.”

Today, medical professionals know multiple concussions can lead to Chronic Traumatic Encephalopathy, better known as CTE, a degenerative condition that causes thinking, memory and personality changes. Symptoms may not appear for years or decades after brain injuries occur and can only be revealed by autopsy.

“It’s not really that one concussion is dangerous,” he says. “The problem is repeated concussions where we’re noticing that the problems occurring, so that’s what we’re still studying and trying to figure out,” O’Malley says. “Essentially, it’s just multiple concussions changing the composition of the brain and not allowing it to function like it’s supposed to. It’s a breakdown of the brain over time, and that’s where you see these athletes that can have mood issues and that’s where the depression comes in and even to the point of causing suicide.”

“That’s what they’re trying to prevent,” O’Malley says. “We’re diagnosing concussions early and also trying to prevent as many concussions as we can. That’s where our athletic trainers and team physicians who are covering sporting events come into play, being able to diagnose that on the sideline and take them out of the game.”
Polanski says players who have taken a blow to the head need to go through a concussion protocol by someone trained in recognizing the symptoms to determine if it’s safe for them to continue playing. He uses the Sports Concussion Assessment Tool 5th Edition, or SCAT 5, to help determine if a player has been affected.

“We have to determine whether it is a concussion or not,” he says. “I’m looking for eye-tracking problems. Do they have convergence problems meeting their eyes on an object as it moves or gets closer to them? We go through some basic tests looking at balance and cognitive skills. Can they answer basic questions: what year is it, what month is it? We’ll also name three random words that they’re supposed to remember, and we’ll check back with them three or five minutes later and see if they remembered them.”

If a player is concussed, they are immediately taken out of action. The best treatment they can get is to rest their brain.

“We really try to reduce the amount of stimuli they have by taking away their cell phones, keeping the lights turned down and trying not to have a bunch of noises and lights that can bother them,” O’Malley says. “The symptoms have to be completely resolved before we can even start reintroducing them back into their sports or activities.”

In addition to physical determinants, Polanski monitors student-athletes’ academic work, including their reading comprehension and if they can follow conversations in classes. After the first 48 hours, if concussed athletes show signs of improvement, he introduces light, nonstrenuous exercise, like stationary bike riding, for 10 to 15 minutes. If their symptoms get worse while they’re exercising, it is stopped. If they can handle small tasks, their activity is ramped up slowly in intensity and duration.

Arkansas United Soccer Club requires each of its coaches to pass an online class on how to deal with concussions before they are allowed to lead a team on the field. – Mark Gibbs

“If they passed all the tests and there are no symptoms with strenuous exercise then you’re really comfortable putting them back into activity saying they’re fully recovered,” he says.

In recent years, concussion education and prevention have become vitally important. O’Malley says educating coaches and having medical personnel at practices and games has helped reduce the number of concussion-related injuries.

“Coaches want their best players to keep playing. Athletic trainers and physicians can come in and kind of be that neutral party that say yes, it is safe for this player, or no, it’s not safe for that player.”

“Coaches are starting to get that education,” he says. “The next step of that is educating the parents.”

Local youth sports organizations are taking steps to ensure their athletes are safe and protected if concussed.

Arkansas United Soccer Club requires each of its coaches, regardless of their level, to pass an online class on recognizing, treating and advising parents on how to deal with concussions before they are allowed to lead a team on the field, says Mark Gibbs, the club’s technical director.

What is a concussion?

A concussion is a traumatic brain injury that occurs when a hit to the head shakes the brain inside the skull. If the blow is hard enough the brain may crash into the skull and sustain significant injury. If someone sustains repeated concussions without enough time between to properly heal, they could suffer lasting brain damage and even death.

• Between 1.7 and 3 million sports- and recreation-related concussions happen each year.

• In the last 10 years, emergency room visits for concussions in kids ages 8 to 13 years old have doubled, while concussions among teens ages 14 to 19 have increased 200 percent.

• 2 in 10 high-school athletes who play contact sports will suffer a concussion this year.