LITTLE ROCK (November 21, 2016) ~ Another detonation is scheduled for the Broadway Bridge on Monday at about four in the afternoon.

One of the remaining two footings that supported the steel navigation arch will be the subject of this afternoon’s detonation, according to the Arkansas State Highway and Transportation Department.

The AHTD suggests that spectators view the demolition from the Little Rock side of the Arkansas River, although officials suggest the entertainment value of this likely will be low. 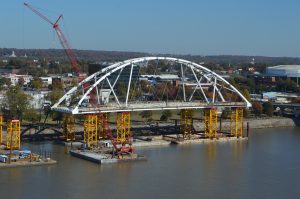 The remaining new arch will also be floated into place this week. The process will begin after 8 a.m. on Tuesday and will take several hours.

By Thanksgiving, Kansas City-based Massman Construction will be 55 days into the 180-day period the company included as part of its $98.4 million bid to replace the Broadway Bridge.

As you watch the construction this week, remember how far we’ve come:

At UAMS, newborn footprints without the inky fuss and muss