Though the rich diversity of outdoor activities available in Arkansas is, perhaps, the trunk of the tourism tree, one of the most important branches is quickly becoming the bicycling industry. Because of this, local leaders throughout the state are investing millions of dollars in additional biking infrastructure.

But this is no new phenomena to Arkansans; bicycling has been deeply ingrained in our culture for over one hundred years.

The first substantial push for biking infrastructure in Arkansas was over 100 years ago. In the late 1800s, bicyclists across the country began lobbying for improved road conditions, which eventually led to a created coalition called the Good Roads Movement. In 1896, an Arkansas branch of this movement was formed, consisting of individuals and groups from almost every county. Although the fruits of this harvest were not reaped until the Alexander Road Improvement Law passed in 1915, these first bicycle lobbyists were an important voice for the road conditions in Arkansas, which holds weight even today. Not only were they the quasi-founding fathers of biking in Arkansas, but their efforts eventually led to the creation of the Arkansas Highway Commission.

Biking was first seen as a legitimate tourism market in the 1970s, and events like the Joe Martin Stage Race in Fayetteville were created, along with brochures for visitors which included riding maps. This market continued to grow into the 1980s with the newfound popularity of mountain biking because Arkansas’ terrain is a perfect one for the sport. In 1989, the Ozark Mountain Bike Festival, Arkansas’ first mountain bike festival, was created at Devil’s Den State Park.

In the early 2000s, the modern era of bicycle infrastructure was incepted in Arkansas; first, with the Arkansas River Trail in Central Arkansas, and next with the Razorback Regional Greenway in Northwest Arkansas.

Over the past 10 years, what was already a healthy market for the state has completely exploded.

In Northwest Arkansas, mountain biking trails are being constructed at a level of about one mile per week, further establishing Arkansas as a significant player in this recreational market. So much so, that Bentonville hosted the International Mountain Bicycling Association World Summit in 2016. 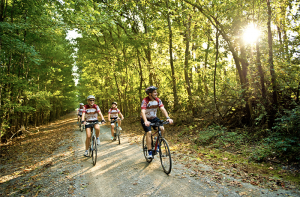 In 2018, the Walton Family Foundation funded a study to assess the impacts that the bicycle trails of Northwest Arkansas have had on the economy and health of the community. Residents and visitors to this corner of Arkansas recognize just how hard and fast growth and development have occurred in recent years. The staggering results of this study show how vital the bicycling tourism income has been, not only on what we see today but also what is to come in the future for this region.

According to the study, cycling produces over $51 million in annual business for the region, including almost $27 million in tourism spending by out of state visitors. An approximated 90,000-150,000 bicycle tourists have visited Northwest Arkansas in the past year. The study also estimates that 55 percent of mountain bike riders on these trails were not residents of the region; originating either from other parts of Arkansas or from other states entirely.

Of even greater importance are the health benefits identified by the study. According to estimations, bicycling has provided $86 million in annual overall health benefits to these local economies, including $79 million in decreased mortality benefits and $7 million in avoided health care costs.

The increased push for infrastructure to attract cycling tourists is not just singular to Northwest Arkansas, either.

In Hot Springs, groundbreaking on the Northwoods Trail began last year and was opened to the public on November 17th. To date, over 15 miles of trail is available to ride, and over 44 miles will eventually make up the trail system in “America’s First Resort.”

Traci Berry is the Northwoods Trail Coordinator for Visit Hot Springs, and she says the reason for creating this infrastructure comes down to the “realization of the impact trails can have on a community, not only economically, but also health-wise. We have seen what it has done for Northwest Arkansas and how it has become a leading economic driver.”

Hot Springs has been no stranger to the mountain biking community over the years, as the Ouachitas have long attracted members of the XC (cross country) demographic of mountain biker. But with the Northwoods Trail, Hot Springs is creating a unique experience for all cyclists.

“In the Northwoods Trail system, there is a trail for all levels of rider from green (beginner), blue (intermediate), to black (advanced),” Berry explains. “[The trails] are also a great mix of XC, flow, and jump line trails. Northwoods is less than a 10-minute drive from downtown Hot Springs which makes it extremely accessible to downtown lodging and restaurants, while still giving you an experience that feels remote offering wonderful lake views and more.” 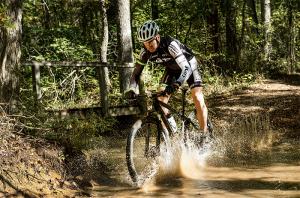 The locale of the Northwoods Trail is part of what makes it unique. With a trailhead in such proximity to downtown, a visitor could ride their bike from their hotel, through the trail, and back, without having to get in a car.

Paralleling the results of the Walton Family Foundation study, Berry says that the out of state community has grown in even more prevalence, to an already tourist-centric town. Cars with license plates from surrounding states, as well as New York, Alaska, Wisconsin and Michigan have become routine.

“I think beyond what it will do for us by way of tourism is what it will do for our existing community – the people and families that work and live here,” Berry says. “People are getting on bikes that have never been on bikes because they no longer have to drive 30 minutes to an hour plus to ride on a trail that may not be very beginner friendly. You know the phrase, ‘Build it, and they will come’ is true. I also like, ‘Build it, and they will stay.’”

When speaking to the history and future of bicycling in Arkansas, one would be remiss not include Joe Jacobs of the Arkansas Department of Parks and Tourism. Jacobs has been riding bikes since the 1970s when he recounts logging 50 to 100 miles per day

in the Washington, D.C. and Baltimore area. Upon moving to Arkansas about 20 years ago, he fell in love with mountain biking. After attending training in trail building with the International Mountain Bicycling Association, Jacobs has helped to build and design trails across the state of Arkansas, including Pinnacle Mountain State Park, Wooly Hollow State Park, and Boyle Park.

In 2016, Arkansas Governor Asa Hutchinson created the Governor’s Advisory Council on Cycling, and Jacobs was elected as its first chairperson.

Jacobs sees the future of cycling in Arkansas as continuing to construct infrastructure to connect as a transportation alternative, rather than just a recreational activity. A few examples of this, are the Delta Heritage Trail State Park, the Southwest Trail, and the United States Bicycle Route System.

The Delta Heritage Trail will be over 80 miles long, from Lexa to Arkansas City, with the potential to be hundreds of miles of riding from Memphis.

The Southwest Trail would connect Hot Springs and Little Rock via an abandoned rail line, providing the opportunity to ride to and from either city, as well as the towns in between.

For the United States Bicycle Route System (USBRS), proponents like the Arkansas Department of Transportation, Arkansas Department of Parks and Tourism, and the Adventure Cycling Association are working toward including Arkansas on the USBRS, which would bring cross country cyclists into the state. This proposed bicycle route would connect West Memphis to Bella Vista. 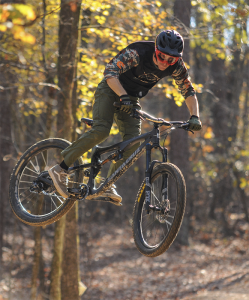 “The toughest lift for Arkansas to become the cycling capital it could be and thus draw hundreds of millions of dollars in tourism spending across the state will have to happen on the local level. Bicycle infrastructure making it safe and easy for us bicycle transportation to run errands, go to work, and go to school needs to be built in our larger towns. If you look at the differences between the Razorback Regional Greenway and the Arkansas River Trail you will find that the Greenway is designed to go through residential areas, shopping districts, by medical facilities and schools. It’s useful as a transportation alternative. While the River Trail has beautiful views punctuated by the incredible bridges and parks it goes through, it’s not really accessible from and to the daily needs of those living in Central Arkansas. It’s a destination, not an alternative to driving.”

Echoing Jacobs’ sentiments, Dustin Williams, the Director of Sales and E-Commerce for Allied Cycle Works, sees the importance of increasing this connectedness between the state – not only as a bicycle enthusiast himself but also as an expert on sales and boosting revenues.

“From Jonesboro to Central Arkansas, Central Arkansas to Northwest Arkansas, and even from Central Arkansas down to El Dorado, I think there is a huge opportunity to create biking infrastructure to connect all of those points, and even more than that,” Williams says. “Even out into the Delta where we are trying to reinvent Helena and that whole area. Hopefully, in the next five or ten years, we will create some sort of mass transit that will connect you to all of those great points of the state. I think that would be amazing for the economy.”

The history of bicycling tourism in Arkansas is essential. We have done well in recent years to embrace this as a means to promote across the board community benefits, and more cities and regions throughout the state should look to these success stories, and build some of their own.

History in the Making? Primaries Set Up Potentially...

Bringing it all Back Home: Lyon College and...