Arkansas Startup Named One of Five Coolest Things on Earth 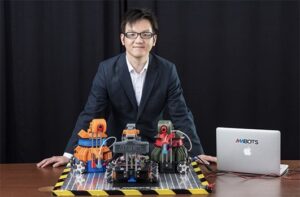 Every week GE Reports, a news site that covers business and innovation, lists five things that are changing the business world. In recent weeks, the site named AMBOTS to its “5 Coolest Things on Earth This Week” list.

According to GE Reports, the company is groundbreaking because it is operating at the “intersection of 3D printing and swarm robotics,” which positions the company to be at the forefront of multiple industries, from manufacturing, such as factories, to agriculture and even waste removal.

“We are very excited to be selected as one of the five coolest things on earth by GE. We hope that our efforts in pursuing swarm manufacturing by mimicking nature can inspire others and make a difference to humanity. Our ultimate vision is to contribute to a civilization where manufacturing is fully digitized and autonomous such that everyone can get customized products on demand,” AMBOTS Chief Marketing Officer Cruz says.

Also known as concurrent 3D printing, swarm printing is an advance manufacturing process that uses multiple robots to print designs. The robots work in concert and are programmed not to interfere with each other.

The idea for AMBOTS dates back to 2015, with the original idea being conceived by Dr. Wenchao Zhou, an investor, professor of mechanical engineering and director of the AM3 Labat the University of Arkansas. Zhou, along with Lucas Marques and Austin Williams co-founded the company.

The company’s mission statement is to “accelerate the transition to a civilization with fully autonomous and on-demand manufacturing.” To that end, the AMBOTS team is working to create a mini-factory at the Arkansas Research and Technology Park, according to a 3DPrint.com article.

“Manufacturing technology is a symbol of the level of human civilization,” Zhou told 3DPrint.com. “For most of human history, craftsmen customized products, be it clothes, shoes or even weapons. But today, everything is mass produced, due to cost. We want to change this. We want to build generalized, autonomous factories that can produce anything for anyone, on demand and inexpensively.”

AMBOTS recently participated in the FUEL Accelerator, a supply chain accelerator based in Northwest Arkansas.

Third Annual NWA Startup Crawl to be Held in September