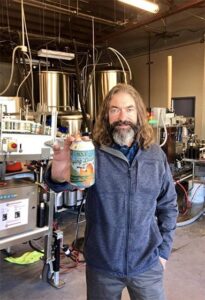 It’s duck season in Arkansas, and two Natural State companies have joined forces to celebrate it.

Flyway Brewing, a 10-barrel microbrewery near the banks of the Arkansas River, in the heart of the Argenta Arts District of North Little Rock, and Rich-N-Tone Duck Calls, a Stuttgart-based call and apparel company, have partnered to produce Flying Duck Amber Ale, a collaborative beer that was released on draught at the beginning of the month and is being released in cans today. 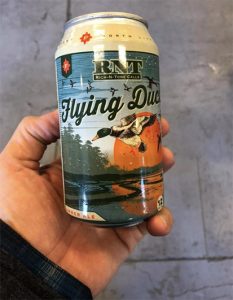 Rich-N-Tone (RNT) was started in 1976 by Butch Richenback, 1972 World Champion and 1975 Champion of Champions duck caller, when he began whittling on a block of wood that he later shaped into his first duck call. The brewery, which took its name comes from the Mississippi Flyway, the largest bird migratory route in the Americas which runs from central Canada to the Gulf of Mexico and funnels waterfowl through Arkansas, produces five year-round brews, 10 seasonals, two imperials and four cake style beers. 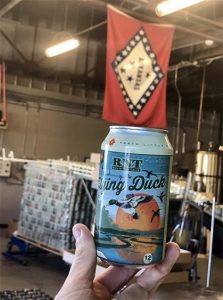 The partnership took flight as Rich-N-Tone was working on designing a new headquarters after a 2016 fire destroyed three-quarters of the company’s home, says RNT president John Stephens.

“We had an opportunity to do something different with the new place,” Stephens says. “We wanted to expand our retail space, have space for a museum-like display of our history and our duck calls, and, because there is so much craftsmanship involved in duck hunting, from calls to decoys to boats, we thought a duck call-themed craft beer bar was a natural fit.”

Stephens wanted to partner with an Arkansas-based brewer to design and develop the bar and a signature brew. He and his team met with several local breweries and found Flyway to be a natural fit.

“We hit it off,” he says. “We had similar ideas and they have been easy to work with. The partnership has been great, and there’s a pride in being able to do it with another Arkansas-based company.”

RELATED: Don’t Call It a Comeback: RNT is Ready to Soar

Jess McMullen, Flyway’s co-founder and chief of operations, says Flying Duck Amber Ale is extremely limited – only about 50 barrels have been produced and around 30 barrels canned – but will be distributed statewide. He says the brewery worked with RNT for several months to perfect the beer’s recipe. 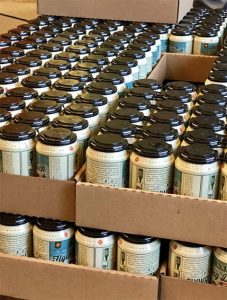 “It’s a fantastic drinking beer – smooth, clean and crisp – with a bit of a biscuit flavor,” he says. “We designed it to be had at this time of year, and there’s been a great response to it so far.”

While Flying Duck is only available in Arkansas, McMullen says he’s received inquiries on getting the beer from 25 states.

“There are a lot of duck hunters and Rich-N-Tone customers in other states who want it,” he says. “When I’ve told them we can’t legally ship it to them, they’ve asked if they can get an empty can.”

A unique aspect of the craft beer industry is the focus on branding the brewery as well as each product offering with individualized names, fonts, images and logos that go beyond the label to merchandise. Blake Fisher, RNT’s creative director designed the artwork for the can and special edition t-shirt, which features a green-head mallard and his flock landing in a flooded rice field.

For now, Flying Duck is a seasonal beer, but Stephens and McMullen say the overwhelming response they’ve received may mean a larger, if not year-round, run next year.

“We’ve got some unique things lined up,” Stephens says. “Hopefully we can eventually expand out of state.” 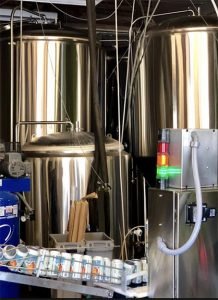 “It’s an exciting, exciting partnership,” McMullen says. “They’re a world-class company, and we’re fortunate to have partnered with them. Those guys are true artists. We’re honored to be working with them. They are cool, cool, cool dudes.”

Images above courtesy of John Stephens