The Arkansas Arts Center has publicly launched a $128 million capital campaign to reimagine the arts institution for the future.

Entitled “Reimaging the Arkansas Arts Center: Campaign for Our Cultural Future,” the fundraising campaign aims to obtain $128 million for the center’s revitalization. Of that goal, $118 million has already been committed to the project.

The Arkansas Arts Center’s redesign is being helmed by Jeanne Gang and her Chicago-based firm Studio Gang. “It has been my pleasure to work on this project to reimagine the Arkansas Art Center,” Gang says

Meanwhile, Kat Orff and SCAPE will be responsible for revitalizing the landscape surrounding the arts center.

The new center will feature renovations to the existing building, and new spaces for gatherings and community events will be created A two-story atrium will connect the galleries, the Museum school and the Children’s Theatre. There will be a new visitor entrance hall that highlights the 1937 Museum of Fine Arts façade. 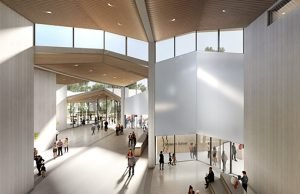 A new restaurant will also be incorporated into the center’s south end. There will be shaded outdoor seating, walking paths, a great lawn and landscape features to blend the architecture with the environment.

Campaign co-chair Harriet Stephens praised Gang for her design and the environmental aspects of the design. “That’s part of her genius – she combines the building with the environment, and for us, that was really important to make McArthur Park part of the Arkansas Arts Center,” she says

As part of the renovation, the Galleries that house the AAC’ art collection will be updated to create a “world-class visitor experience.” The Museum School’s facilities will also be renovated to increase the education offering and improve student experience. The Children’s Theatre will feature new lighting, sound and rigging systems, along with control rooms, audience seating, a black box theatre expansion, dressing rooms and a new costume shop.

“Our design reimagines the Arkansas Arts Center to unlock new connections between an extraordinary art collection, thriving Museum School and Children’s Theatre,” Gang says. “Along with much-needed renovations, new daylit spaces linked through the core of the Center will facilitate movement and create a series of vibrant, new public spaces for social interaction, education and appreciation for the arts. Opening onto Crescent Drive and MacArthur Park, the new architecture will strength the relationship between the Arkansas Arts Center and the community.” 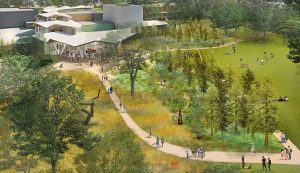 Twenty-one individuals, families and foundations have contributed gifts of $21 million or more. These individuals and institutions will be recognized as 21stCentury Founders.

“A remarkable group has come together with a clear understanding of the importance of reimagining the Arkansas Arts Center for the 21st Century,” Harriet Stephens said in a statement. “We will now reach out to the entire community and state for support to realize this once-in-a-lifetime project. Together, we can ensure that the Arkansas Arts Center is a thriving and influential cultural institution for present and future generations.”

Warren Stephens echoed her statement, saying, ““It [Art] means so much and it just expands your horizons. I think people want to be exposed to art and they want their children exposed to art,” he says.

Little Rock Mayor Frank Scott Jr. calls the project a “bold vision, a beacon of light for the city, region and state.” He says the center will “help us become a catalyst in the New South.”

A groundbreaking for the AAC is expected to be held in fall 2019. During the construction process, which is projected to last from fall 2019 to early 2022, the arts center will temporarily relocate to the Riverdale Shopping Center at 2510 Cantrell Road in Little Rock.

The reimagined Arkansas Arts Center is expected to open in early 2022. 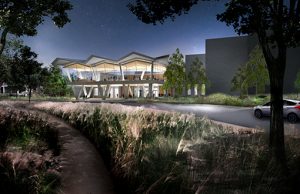 View from the Senate: New Workforce Plan to Reduce Duplication of Programs