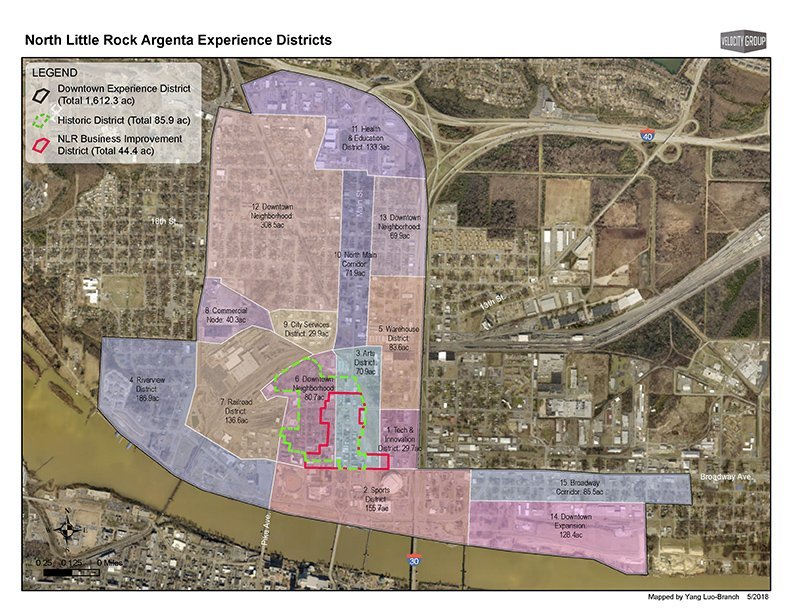 The Argenta Downtown Council, a downtown development nonprofit, has released a map of 15 “experience districts” in North Little Rock where it will focus its revitalization efforts.

At a Wednesday luncheon at the Arkansas Regional Innovation Hub, Argenta Downtown Council Executive Director Chris Kent revealed the map, which will expand the council’s focus to over 1,600 acres.

Kent explained that, over the last 20 years, the council, along with other development organizations, has achieved many of the goals it originally set out for itself in creating the Argenta that exists today. Its next project is to go beyond what most people think of as Argenta, into the surrounding area of North Little Rock. He called the districts a “map of a greater downtown North Little Rock.”

The districts stretch from the banks of the Arkansas River north to I-40 and the map includes a Sports District, Broadway Corridor, Arts District, Warehouse District, Riverview District and Railroad District.

Over the next four months, task forces will go into the 15 areas and ask what the people who use those areas need. Eventually, Kent said, the districts will become a bigger, stronger and more inclusive downtown North Little Rock.

Daniel Hintz, CEO of Bentonville-based experience design firm Velocity Group, worked with the council to develop the districts. He spoke about the importance of “experience” to placemaking, explaining that urban planners should break up areas by experience and then use that to set the tone of the area with physical infrastructure.

“We understand that each neighborhood in downtown North Little Rock has its own distinct vibe, its own distinct experience. The process we used to define the districts offers an asset-based approach, identifying what is unique and amplifying that with supportive strategies,” Susie Cowan, Argenta Downtown Council director of marketing and development, said in a news release.

Hintz also discussed how government, nonprofits and the private sector can work together to create change in community development. Cooperation and collaboration were common themes at the luncheon.

The success – and safety – of North Little Rock, Little Rock and the surrounding area will transform this part of Arkansas into one of the South’s great cities and metropolitan areas, Kent said.