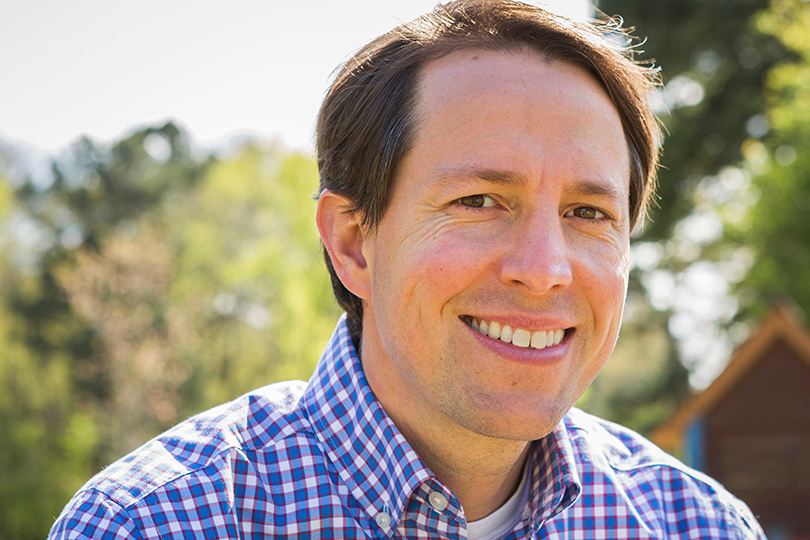 Rep. French Hill, R-Arkansas, has served in Congress since he was elected in 2014, but some view his seat as the most likely to turn blue in 2018, and one man working to turn that seat blue is Democratic state legislator Clarke Tucker.

Tucker has served two terms in the Arkansas House of Representatives. He represents House District 35, which includes part of Little Rock out to Roland. His political career stretches back to high school when he ran for class office. Tucker says he also started a group called The Tiger Foundation, which raised money to help support his fellow students.

The Democrat says before running for the Arkansas House, he served in a number of campaigns and even interned in Washington, D.C., for former Rep. Vic Snyder, D-Arkansas.

Tucker says the tipping point when deciding to run against Hill turned out to be Congress passing legislation to weaken the Affordable Care Act.

“I know how important health is,” Tucker says.

The legislator was diagnosed with bladder cancer. After going through treatment, Tucker is now cancer-free. “It brought it home for me,” he says.

Another reason Tucker decided to run was to restore courage, heart and decency to the political process because of how far discourse has devolved over the last couple years, he says.

While some are predicting a blue wave to hit Congress in November, Tucker says that’s not something his campaign spends time talking about. The Democrat said he has blinders on to focus on how he can best help the people of central Arkansas.

For those wondering if Tucker is more of a progressive or centrist Democrat, the legislator says both describe his campaign. Tucker says he views that as a false choice. He describes himself as progressive in wanting every child to have access to Pre-K, and moderate in how he’s willing to work across the aisle.

If elected, Tucker believes he can translate his experience in the Arkansas House to Congress. Republicans have a super minority in Arkansas, but Tucker says he has still been able to get important legislation passed. And although working across the aisle might be more difficult in Congress, Tucker says it’s not impossible.

When it comes to his Republican opponent, Tucker says voters should pay close attention to any congressional leader who receives more than $1 million in funding from special interest groups.

As for what Tucker has in the bank, the Democrat says he has enough resources.

The legislator says he can’t control what money Hill receives, so his campaign is just focusing on what it can control.

As Tucker campaigns through central Arkansas, he notes that the biggest concerns among voters are healthcare and the 2017 Republican tax bill.

“People have a real concern about their healthcare,” he says.

When it comes to the tax bill, Tucker says voters have voiced concerns over an increased deficit and the effect it’ll have on social security and Medicare in the next decade.

Other concerns from voters include the impact of President Donald Trump’s tariffs on Arkansas agriculture and partisanship in Washington. “They want an independent voice in Washington,” he says.

If voters send Tucker to Washington, the legislator says his biggest priorities will be making sure people have access to healthcare and strengthening public education.

Tucker wants college to be more affordable, saying crushing college debt is a cause of declining entrepreneurship across America. In addition to college concerns, Tucker wants to increase access to alternative education paths, like apprenticeships for plumbers and electricians.

Overhauling infrastructure and making sure high-speed internet is available across rural communities to keep home-grown talent from moving elsewhere are also top priorities, according to Tucker.

In a time when Second Amendment rights are front and center in public debate, some Republican voters are concerned Democrats simply want to pass legislation and take away their guns. The Little Rock legislator says he wants voters to know that isn’t his goal.

Tucker says he has shotguns in his home that belonged to his father and grandfather. The Democrat remembers being taught to shoot on the farm by his father and growing up hunting. “I don’t want people to take my guns,” he says.

But what he does want is some common-sense reform that saves lives, things like expanded background checks.

When he was in the Arkansas Legislature, Tucker filed a bill to keep guns away from people convicted of misdemeanor domestic violence, trying to make Arkansas law match federal law. That’s an example of common-sense reform he supports, he says.

But perhaps the most important thing Tucker wants voters to know about him is he was born and raised in Central Arkansas. Tucker says the central Arkansas community is in his DNA.

From now until Election Day, Arkansas Money & Politics will bring you highlights, insights and interviews from candidates in all the major races. AMP does not endorse candidates, but will not shy away from bringing readers both sides of the story.