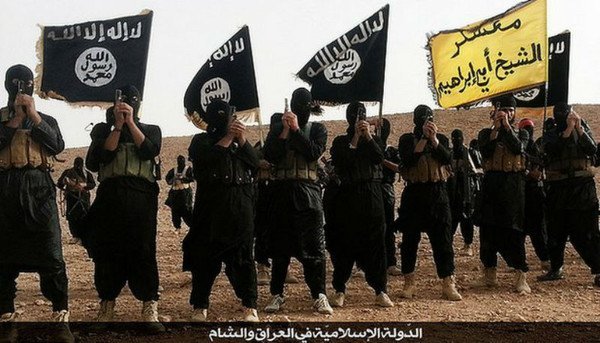 Social media and digital communication tools have largely been considered as positive vehicles of change. However, the power of social media has been harnessed by extremists and terrorist groups to spread propaganda and influence mass thinking.

From the terrorist attacks in Paris in November 2015 to mass beheadings of Syrian Christians in October 2015 and Egyptian Coptic Christians in April 2015 among several other heinous acts of terror, the so-called Islamic State (commonly known as ISIS or ISIL) is rapidly asserting dangerous influence over the world and sadly threatening the life of many innocent people.

ISIS’ digital influence in social media is extraordinary. According to the Brookings Institution, ISIS has more than 70,000 Twitter accounts, which generates about 90,000 tweets on a daily basis. In today’s interconnected world, terrorist groups and transnational crime organizations, such as ISIS, employ advanced communication tactics via social media, especially Twitter. In fact, ISIS has developed its own Twitter app available on major platforms including Android and iOS, which is used to recruit, radicalize, raise funds, and coordinate attacks.

Reports have indicated that a social/collaborative answering website known as Ask.fm has been strategically used by ISIS to answer questions from potential recruits. According to a report by the International Center for the Study of Radicalization and Political Violence, ISIS uses highly sophisticated and carefully blended social media outreach strategies to the effect that this has led to an increase in the number of ISIS’ supporters online as well as on the ground.

President Barack Obama described ISIS as “killers with good social media [skills]” who recruit in “far flung” places. United States authorities have announced that about 250 American have traveled or tried to travel to Iraq or Syria to join ISIS. In addition, there are more than 900 active investigations of ISIS sympathizers as of fall 2015.

Due to the increasing dangers caused by ISIS globally and in the United States specifically, there is a need for rigorous studies that analyze behaviors of ISIS as a group, evolution of their online networks, and the strategies and means they use to spread their propaganda. Various efforts conducted by the U.S. State Department’s social media program, “Think Again, Turn Away” or vigilante and “hacktivist” groups such as “Anonymous” are trying to counter ISIS’ online narratives or disrupt their online influence.

Though the efforts are well-intentioned, these are yet far from accomplishing the mission. As our government and organizations begin to rely more and more on social media for open source intelligence data and situational awareness, they will need to be able to identify, track in real time and mitigate the risks. Existing approaches to cyber-threat assessment and mitigation strategies overlook the societal aspect, which warrants the need for novel socio-computational methods.

Through our research, we aim to: 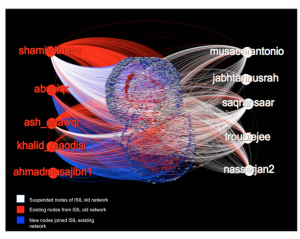 Figure 1. Visualization of how ISIS’ Twitter disseminator network has changed from September 2014 to March 2015. Many accounts are suspended. Few are still active. And new ones have joined. This figure has a total of 16,539 Twitter accounts and 21,878 connections — i.e., friends and followers of ISIS disseminators. The 10,739 accounts in white color are the ones that have been suspended; 2,921 accounts that are in red color are still active; 2,879 accounts that are in blue color are new recruits. Nodes with many connections are depicted with big labels and these are the top disseminators. As evident, of the top 10 disseminators, five have been suspended.

In our research, we apply computational modeling, social network analysis and cyber-forensics with theoretical underpinnings in social sciences to understand and analyze the deviant sociotechnical behaviors of transnational crime organizations such as ISIS. We collect and analyze data from social media channels prominently used by ISIS including Twitter, blogs and YouTube.

We have collected data from the top 10 ISIS propaganda disseminators’ Twitter accounts mentioned in a report released by the U.K.’s International Center for the Study of Radicalization then studied their network evolution during a six-month period. See Figure 1.

During these six months, Twitter suspended several accounts. Many Twitter accounts were attacked by the “Anonymous” hacking group while several others were captured in different places around the world, but ISIS’ online network kept growing, indicating vigorous recruitment by ISIS leaders.

We analyzed the datasets for various beheadings and mass killings conducted by the ISIS during 2015 and 2016. Then we extracted the social network (an agent-agent network) and the communication network (an agent-knowledge network) of the group. 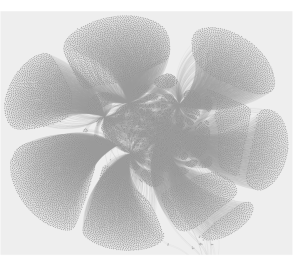 Figure 2. ISIS’ Twitter disseminator network consists of over 85,000 Twitter accounts of ISIS supporters including the top 10 ISIS disseminators. The top disseminators have the most connections — friends and followers. These are depicted by as the root of the demonstrated by the ‘bulbs’ in the figure of friends and followers emerging out of them. It was observed using a sophisticated social network analysis technique that top disseminator accounts are not only the leaders (i.e., most connected), but they are also connected to one another and coordinating with one another. They are coordinating in disseminating ISIS propaganda, forming a powerful campaign organization network.

Also noted was the exploitation of botnets (computer programmed agents that have the ability to post large number of tweets in a very short time) in dissemination of ISIS propaganda on Twitter, indicating a highly technology savvy ISIS supporter base.

Additionally, we use cyber-forensic techniques to discover the otherwise hidden blogs, websites and metadata (such as IP addresses, phone numbers, email addresses and physical locations), contributing to the open source intelligence gathered from our studies, which is then forwarded to the U.S. National Geospatial Intelligence Agency and other U.S. defense analysts.

Digital communication tools could pose a dangerous force against democracy as well as diplomacy.

Currently, we are in the infancy of where participatory media and technology merge — a lawless Wild West of social media — calling for rigorous studies on sociotechnical behavioral modeling, content generation and censorship in social media, cyber-threat assessment, cyber-human systems, or social computing technologies in general.

Through this research program, we intend to create an interdisciplinary collaboratorium bringing researchers and practitioners from various disciplines, including (but not limited to), computational and information science, social science, security and digital forensics, cognitive science, political science, economics, among others to share, exchange, learn, and develop new concepts, ideas and principles, aiming to advance the understanding and the current state of research in the security of social media and society.

The research presented here is supported in part by the U.S. Department of Defense (including Office of Naval Research, Air Force Research Laboratory, and Army Research Office), the U.S. National Science Foundation, and the Maulden-Entergy Endowment at UALR. Any opinions, findings, and conclusions or recommendations expressed in this material are those of the author and do not necessarily reflect the views of the funding agencies.