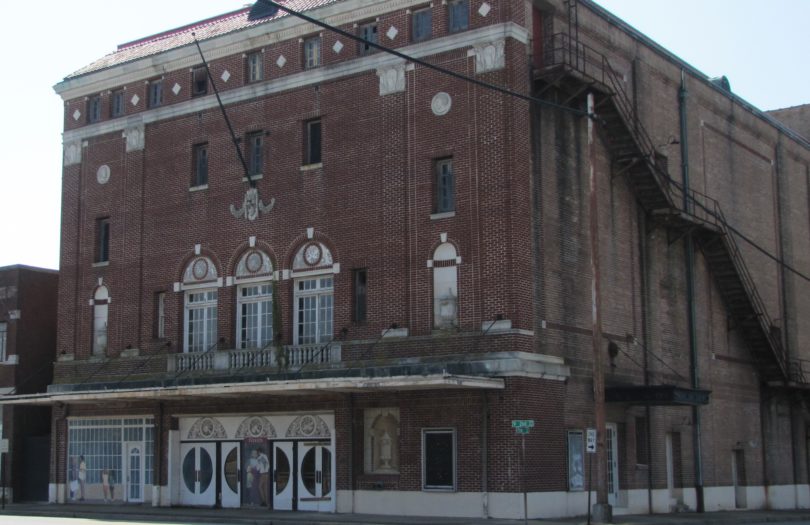 Photos for AMP by Kim Dishongh

The Saenger Theatre in Pine Bluff once drew the likes of Gloria Swanson, Norma Talmadge, D.W. Griffith and Judy Garland.

Audiences regularly filled the theater’s 1,600 seats to watch performances by Harry Houdini, Will Rogers and John Phillips Sousa, as well as Roy Rogers and his horse, Trigger.

The scenery inside the theater has changed drastically since those days. Glitz and glamor have given way to disarray. Seats, pulled from their moorings, are piled in heaps, the orchestra pit and dressing rooms are filled with water, and the plaster on half of the wall in the theater’s balcony has collapsed.

“It looks bleak, I know, when you walk in here, but it’s nothing that can’t be fixed. This building can be saved. It must be saved,” said Mrs. Majewska, co-executive director of the Old Town Theatres, a non-profit group that sold the building to the city for $1 in 2012 in hopes of seeing it restored. 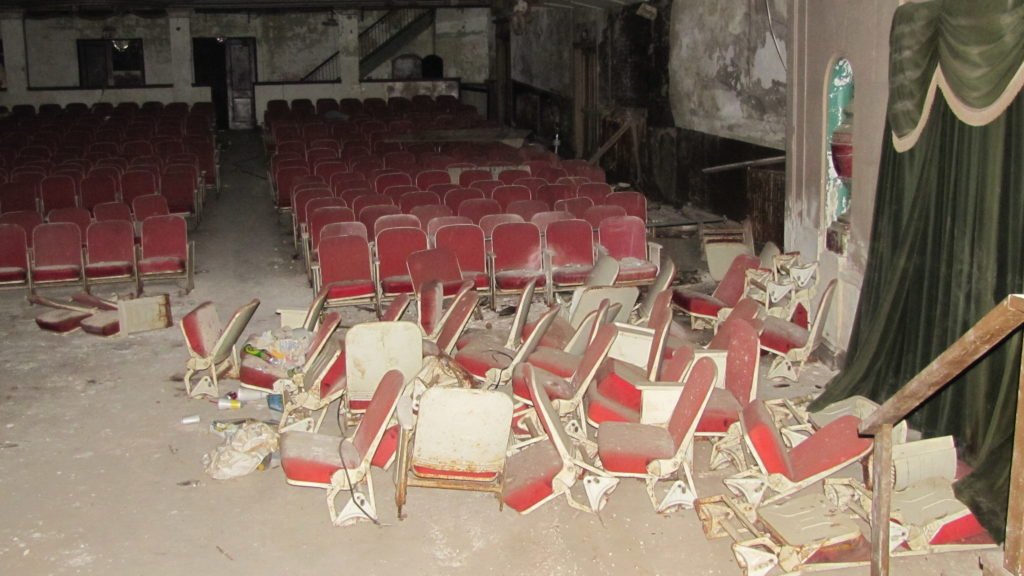 The physical and financial challenges of what she wants to accomplish pale, Mrs. Majewska said,  in comparison to the apathy she has seen in the community.

“It’s so difficult to think that theater matters, but theater is civilization. … People don’t know any more about the history of this theater. They don’t recognize the names of all the wonderful people who have been through here,” she lamented.

Vandals regularly break in. One recently scaled the rusty fire escape on the side of the building. They pull pipes from walls, yank toilets from the floor and wreak havoc in myriad other ways. A bullet hole mars the glass of one of the theater’s half-moon-style front doors.

“They’re probably looking for copper wiring and things like that,” said Pine Bluff police officer DeShawn Bennett, who responded to one of Mrs. Majewska’s most recent calls for help.

Mrs. Majewska grew up in Pine Bluff but spent 18 years in New York pursuing a life in theater. She has been trying to save the Saenger since 1994, shortly after she returned to her hometown and created Old Town Theatres so she could take possession of the Saenger from another non-profit that had lost steam along the way. 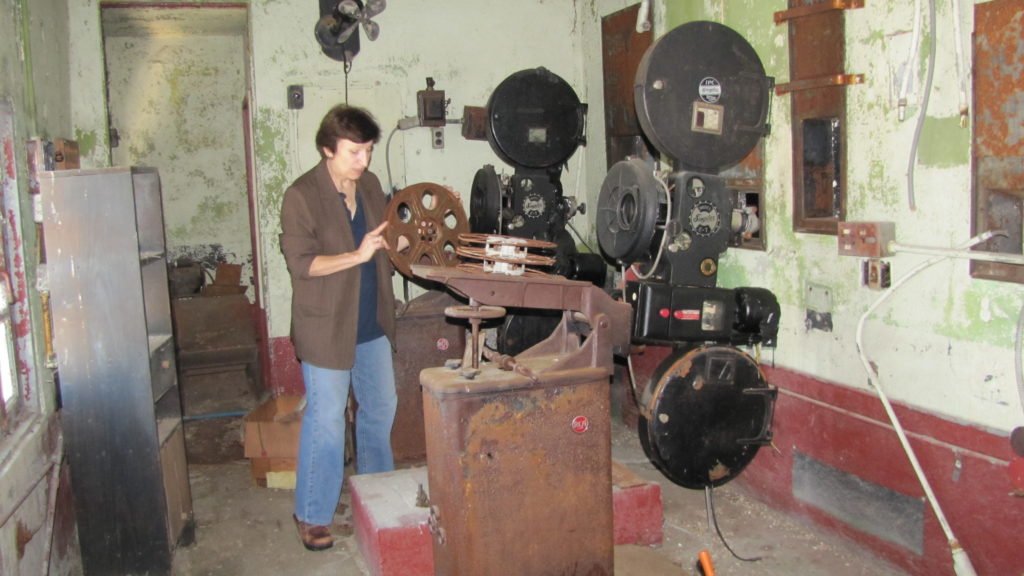 Caesar Romero was among the last to perform on the theater’s Broadway-sized stage as Vaudeville was fading in the early 1960s. Then the Saenger was turned into a movie theater, but it still enjoyed regular use – and routine maintenance. The Saenger closed its doors in 1975 as modern movie theaters lured moviegoers away.

Mrs. Majewska hopes someone will restore the  Saenger to its original glory.

“We brought a circus in, and we had it at the Saenger because of the film, The Circus, with Charlie Chaplin,” Mrs. Majewska said.

The Saenger had been vacant for several years by then, and their goal was to bring attention to its plight and raise money for its restoration. It worked – for a while.

The last Pine Bluff Film Festival took place in 2007 as funding faltered. Old Town Theatre lost grants from the city, the Arkansas Arts Council and from the Arkansas Historic Preservation Program. Theater supporters began to move out of town.

Mrs. Majewska and Mr. Stradley bought the Community Theatre, catty-corner from the Saenger on West 2nd Avenue in 2012, invested $600,000 to restore it and began scheduling dinner shows.

“When we bought this theater, 22 other buildings started going through improvements and developments,” she recalled. “A restaurant opened, there was an outdoor music festival, things were starting to happen.”

That was the year the Saenger replaced its old roof, which a storm had damaged.

Robert Tucker, who worked for the city of Pine Bluff then, had urged then-Mayor Carl Readus to form a task force to figure out how to save the Saenger.

Old Town signed over the building to the city because the insurance rates had become crippling for Mrs. Majewska and Mr. Stradley, and because Mr. Tucker could only write applications for grant money to preserve the building if the city owned it. City-financed studies revealed that the building was structurally sound, according to Mr. Tucker. He secured a $15,000 matching general-improvement grant from Southeast Arkansas Economic Development District to cover replacement of the Saenger’s flat roof.

“I’m not especially a theater lover. I mean, I love it, but my degrees are in landscape architecture, and I studied architecture history in Fayetteville and at Ohio State,” Mr. Tucker said. “My love is from an historic, urbanist point of view. And from a historical perspective, it was a wonderful time when a town the size of Pine Bluff in 1924 could build a building like that. That’s pretty remarkable to me. It was a different world,” he said.

His push for its preservation was a stopgap measure.

“My thought process back then was that we don’t have a market for this building now, but if we do this, we can forestall the day when it has to be torn down for 15 to 20 years,” said Mr. Tucker, now the study director of the Tri-Lakes Metropolitan Planning Organization West Central Planning and Development District in Hot Springs. “My goal was simply tactical. It was to keep it from falling down for one more generation and to give it another chance to find an audience.”

In a second phase of improvement, a grant from the Arkansas Historic Preservation paid for the Saenger’s tile mansard roof. Further renovations, however, weren’t feasible.

“There were a lot of people who supported the Saenger theater very strongly,” he said. “There was also a significant part of the city that didn’t support it. I think it was because they remembered being discriminated against in the building. They remembered being forced to sit up in the balcony. There was always this undercurrent of, ‘Why do we want to save that building. We were treated poorly in that building.’ It’s the same old story in Pine Bluff – ‘us versus them’ – and it extends even to the Saenger, I found out. There’s a problematic dynamic going in Pine Bluff, and I hope it gets resolved, but you never know.”

Support from the government has been sporadic.

Pine Bluff Alderman Steven Mays is a long-time supporter of efforts to restore the Saenger. “There’s a lot of talent in Pine Bluff that needs to be showcased on the stage. I feel like we need to use our young people more, and they have the talent to make things happen. … That’s what they’re looking for – even the teenagers – they’re looking for some leadership and guidance,” he said. “It’s just going to take vision to make some of the things that could happen there come to reality. My thing is we need to bring back the walking and driving traffic to downtown and make it a tourist attraction for the state of Arkansas. Right now we’re the only city in Arkansas that I know of that is not growing.”

Mays visited the Perot theater in Texarkana with the Arkansas Municipal League a few years ago. “It was restored beautifully. I know it probably would cost $7 million or $8 million to get the Saenger top notch, but I feel like it would benefit our town in the near future,” he said. “I’ve been campaigning for it, but just not lately. I was a force in getting the roof repaired. Now we’re sitting back and planning how to restore and rebuild our Saenger theater that would benefit our downtown area.”

Cynthia Hines, director of marketing and communications for the city of Pine Bluff, saw movies at the Saenger as a child. 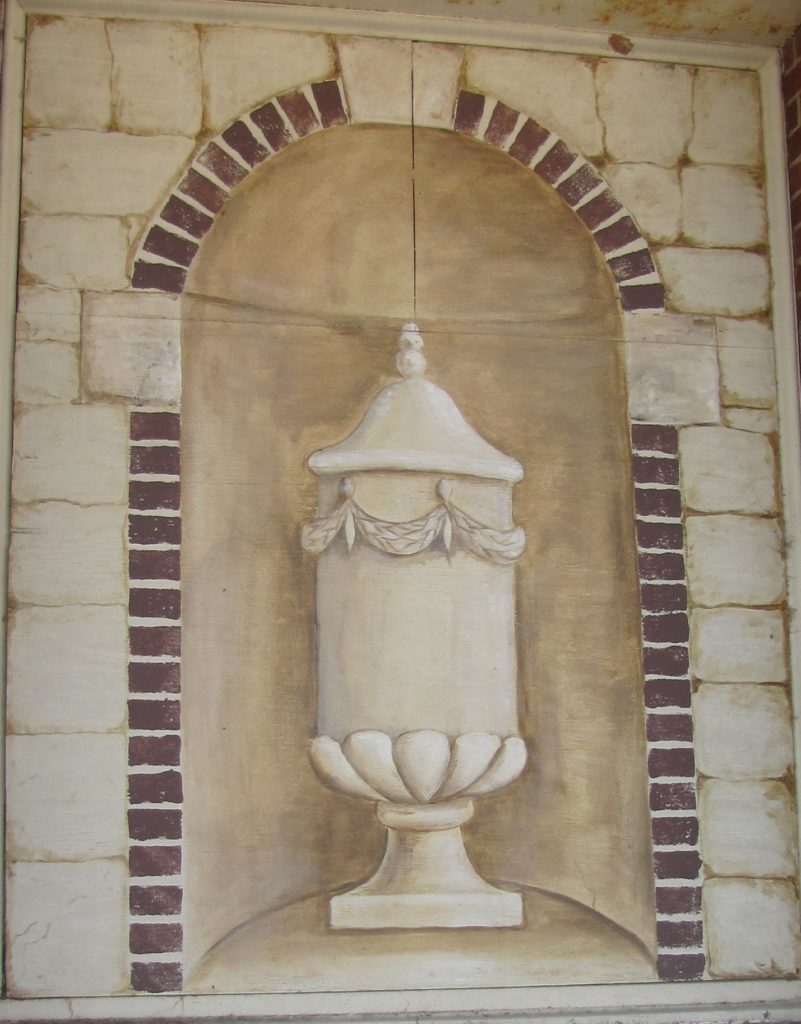 “I would like to say yes, that tomorrow we’re going to do all of this. I don’t know that. I do know there are folks who are still working to restore the theater,” she said. “I know that the Saenger was very important to the city. There is some history that is, of course, not pleasant from some of the earlier years. But we want to restore the Saenger. A lot of the theaters that come from that era have been lost, and we have an opportunity here in Pine Bluff to save ours and to use it for something else, maybe.”

Various ideas have been bandied about. Last year, Mrs. Majewska said, the Pine Bluff Fire Department asked to use the building in its training exercises.

“I told them no way. I refuse to see it turned into a haunted house or a Pizza Hut. It doesn’t have to be Broadway shows that come in, but there are all kinds of artists who come in need of venues – there aren’t as many venues anymore,” she said. “This is the horseshoe theater and the horseshoe balcony. This is based on the Paris opera style of theater, the single structure theaters that are so rare. There are hardly any left in the United States, and we have one here in Pine Bluff. We have to save it.” 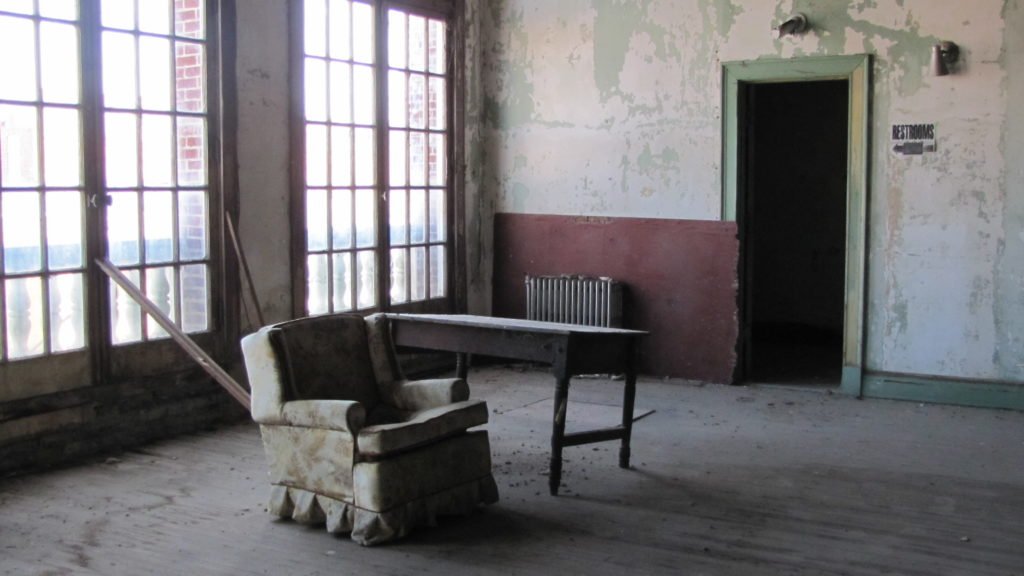 Mr. Stradley has all but given up hope of seeing progress since Mr. Tucker’s departure four years ago.

“He left …  and we never could really get the city interested in doing anything,” he said. “I think it’s important to the city of Pine Bluff to get it restored but it takes a tremendous amount of money, and it takes somebody who is really interested in it. And at this point the city government does not appear to be interested.”